Kate Middleton’s personal life was catapulted into the spotlight when she began dating Prince William back in the 2000s. In their early years of dating, Kate wore quite casual and laidback clothing, but as she became more of a public figure, she began favoring more elegant and sophisticated pieces. From 2010 to 2020, Kate Middleton has definitely had a major fashion transformation, so follow along as we recap everything that’s changed.

One of Kate’s earliest appearances with Will was at Harry Meade and Rosie Bradford’s wedding in October 2010. She wasn’t yet engaged to him, but it was clear to the public that the duo was in a very serious relationship. For the wedding, Kate wore a blue satin dress paired with a blazer and a fascinator. The look is simple and polished, but it was clear from the photos released from the event that she felt uncomfortable and was constantly fiddling with her fascinator. 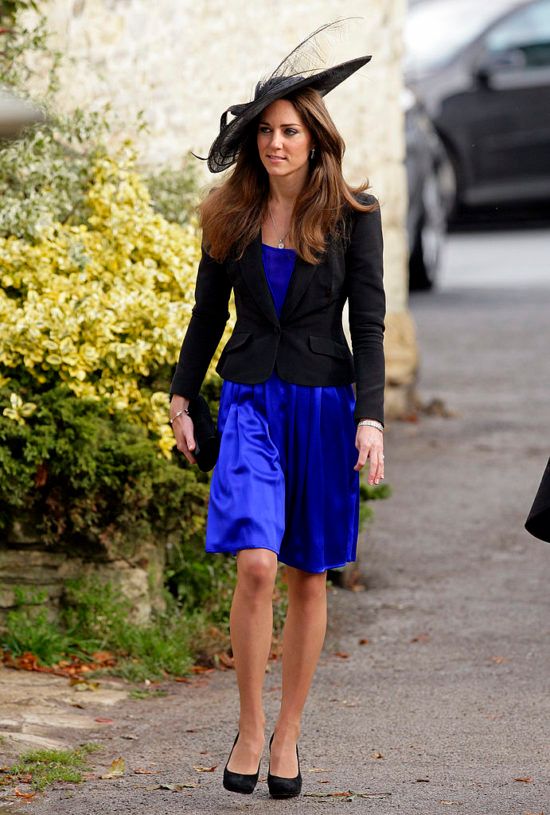 Just one month following the wedding appearance, Kate and Will stepped out together to announce their engagement. For the appearance, Kate wore a long-sleeve blue dress with ruching on the waist. The dress immediately sold out everywhere and is one of her most iconic looks to date. It’s safe, elegant and fits her well. 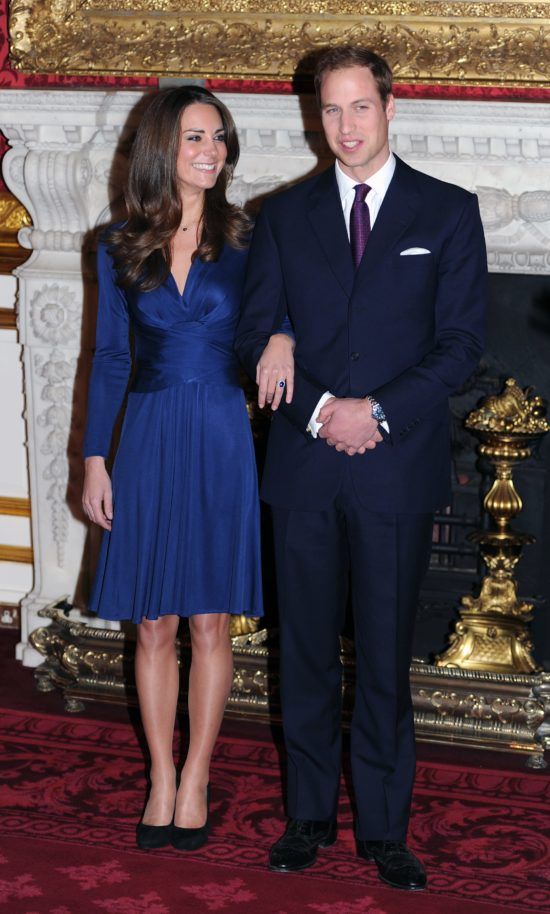 In April 2011, Kate walked down the aisle to officially marry Prince William wearing a stunning lace bridal gown designed by Sarah Burton of Alexander McQueen. The dress instantly became one of the most iconic wedding looks of all time and dictated the bridal trends for years to come. 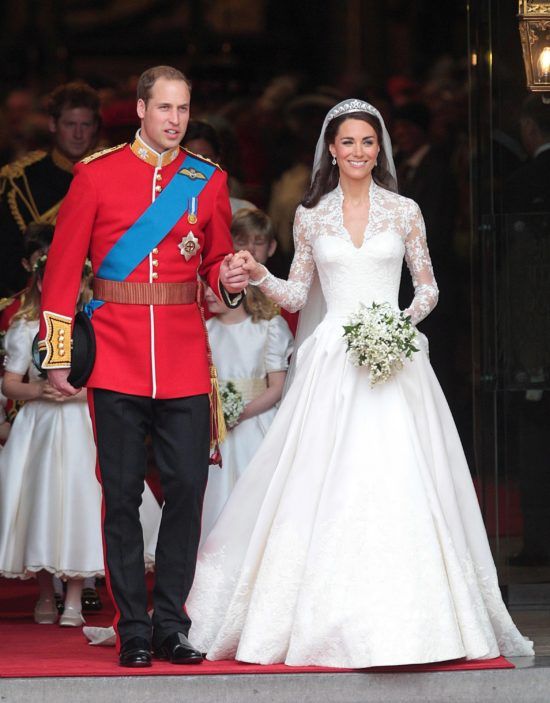 Once officially married into the royal family, it became clear that Kate’s wardrobe was evolving. She still favored casual pieces like skinny jeans and wedges, yet she styled them to look super polished and sophisticated. Her style would become even more refined and modest in the years to come!

In December 2011, Kate stepped out wearing this olive green sweater dress while visiting a homeless charity in London. She paired the look with a thick black belt, opaque tights, and knee-high boots. This casual look is definitely reflective of its time and not something we’d imagine that Kate would wear today. 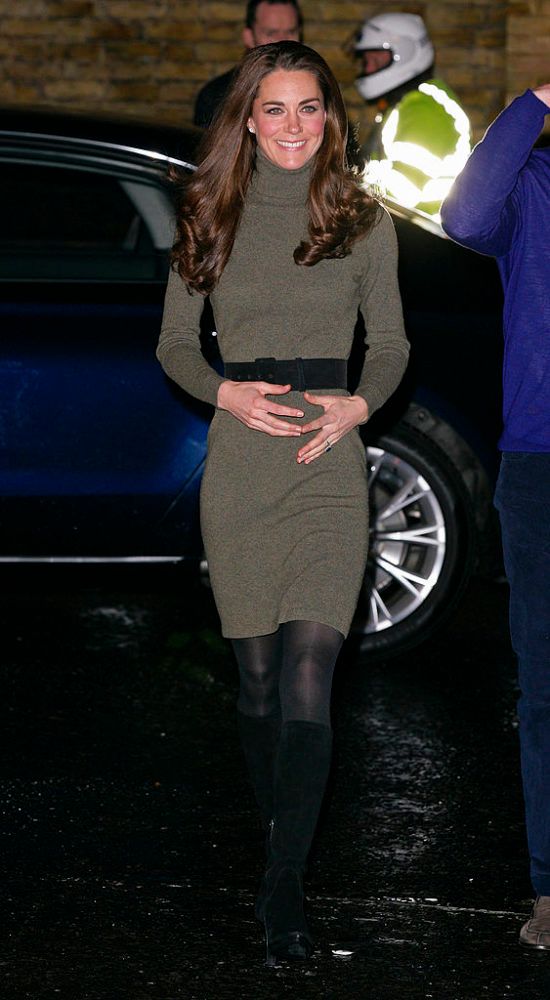 One of Kate’s signature ensembles is a matching tweed suit! She’s worn this look on multiple occasions throughout the years, even as early as 2012! Tweed suits are polished, professional and chic, so we can certainly see why this has been a go-to favorite of hers throughout the years. By 2012, Kate’s style had certainly become more regal and formal.

In June 2012, Kate stepped out wearing this peach lace dress with a matching fascinator. It was clear by 2012 that her fashion had evolved dramatically from 2010 and 2011. Her style was refined, formal and regal, which made her look every part a Duchess! 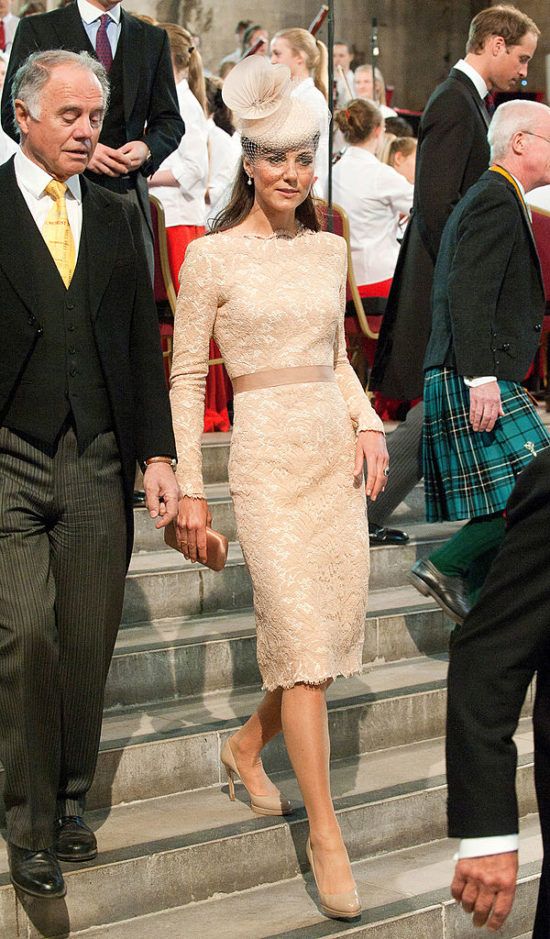 In 2013, Kate and Will announced that the Duchess was expecting their first child. Kate’s fashion evolved once again while she started incorporating maternity and A-line pieces into her wardrobe. This emerald look she wore to a St. Patrick’s Day service in 2013 is the epitome of Kate’s maternity style with its flared skirt and collared neckline. 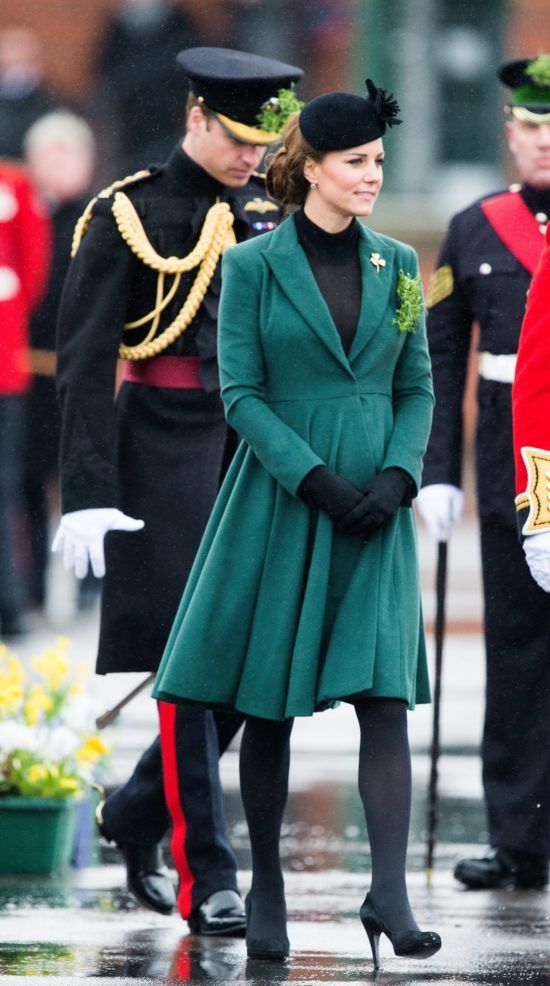 In July 2013, the royal duo stepped out to present their firstborn, Prince George, to the world. For the occasion, Kate wore a cornflower blue shift dress with white polka dots. It was widely assumed that the look was in honor of Princess Diana, who wore a similar teal dress while presenting Prince William to the world. Re-creating some of Diana’s iconic outfits is something that Kate has done often throughout the years! 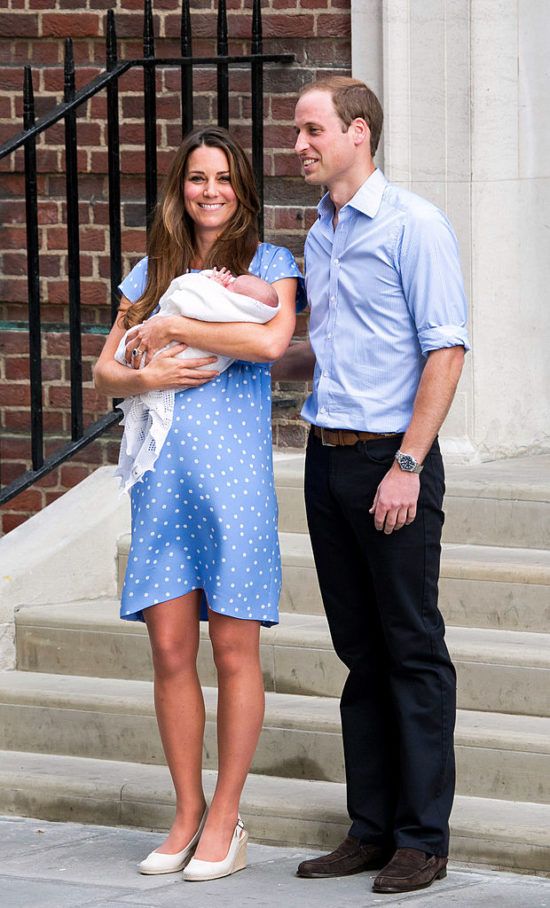 The next year in April 2014, Kate stepped out wearing a light pink two-piece set. The look featured a polished peplum cut and a flared skirt, which she paired with nude accessories and a sleek half-updo style. A look like this is a signature style of Kate’s: feminine, classic and modest. 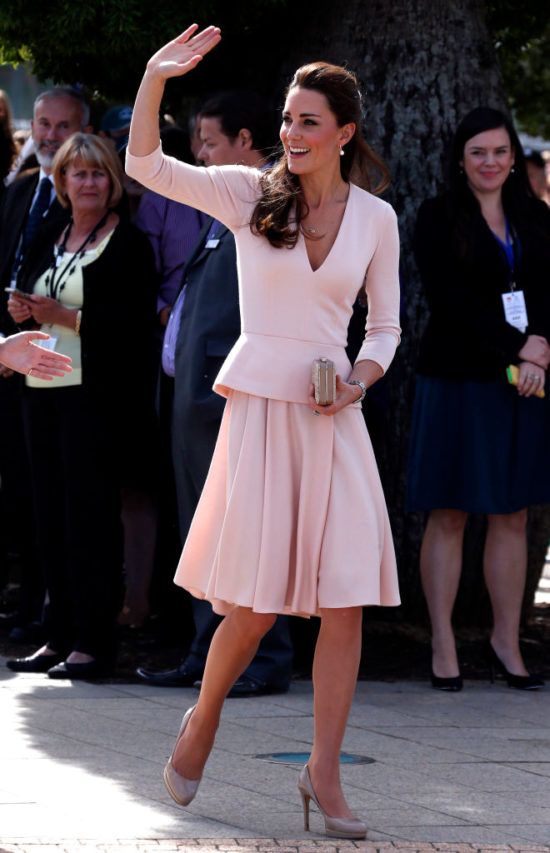 One of Kate’s most iconic looks is this nautical-inspired ensemble she wore in June 2014. The look definitely stood out among her tweed suits and feminine sets, and we were happy to see that in 2014 Kate became a little more willing to experiment with her style. 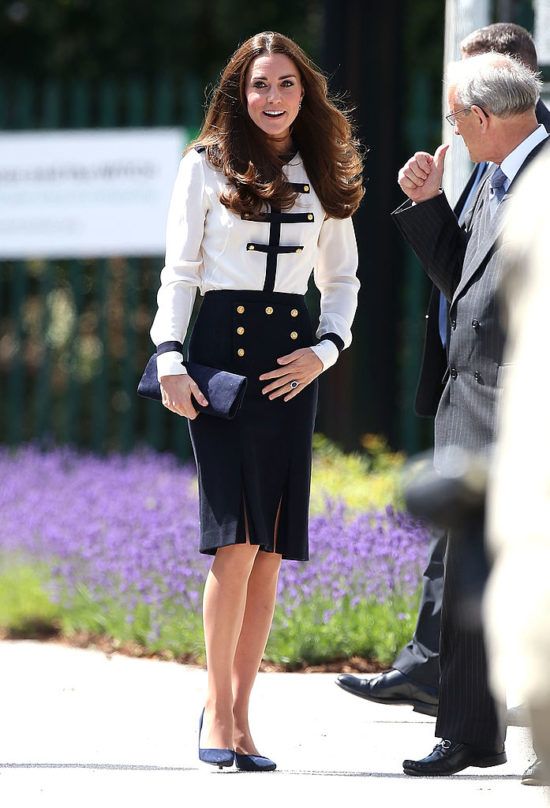 In March 2015, Kate was pregnant again with Princess Charlotte. For her second pregnancy, she recycled quite a few of her past maternity looks, but one of her most memorable was this bright fuschia wool coat. The ensemble feels very regal, traditional and reminiscent of Queen Elizabeth’s vibrant style. 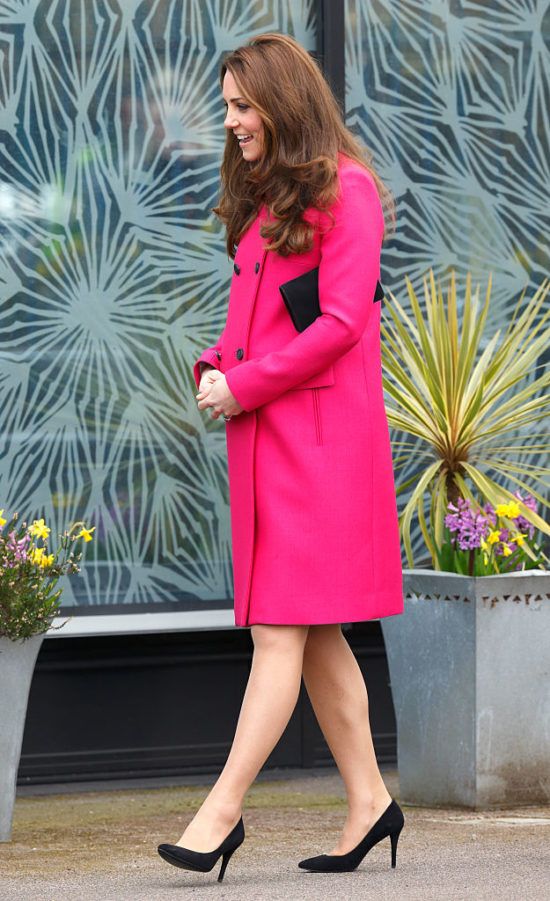 A few months later, in May 2015, Kate wore a yellow printed dress to present Princess Charlotte to the world. The look felt very appropriate for the occasion with the lovely buttercup yellow detailing and floral print. 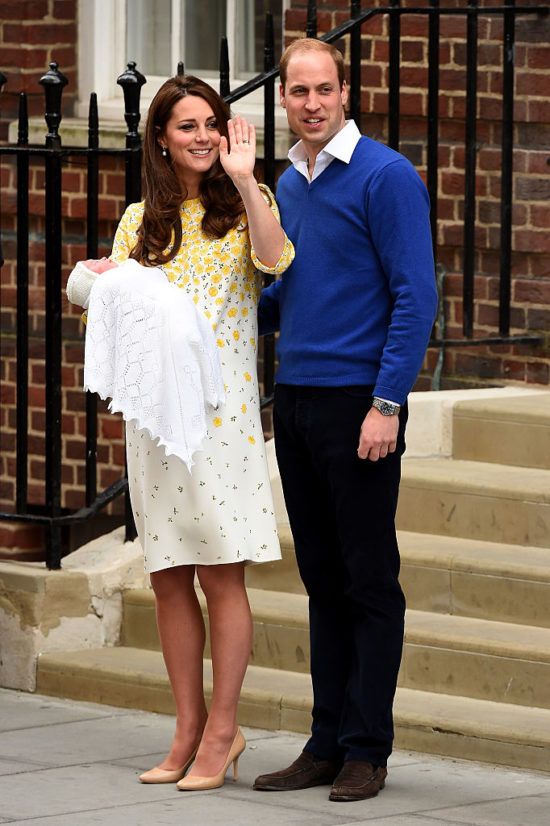 One thing that hasn’t changed for Kate’s style throughout the years is her love of tweed. In March 2016, she stepped out wearing an orange printed tweed dress in a sophisticated houndstooth print. Aside from her fashion, in 2016 Kate transitioned her beauty look by debuting a new shorter hairstyle. 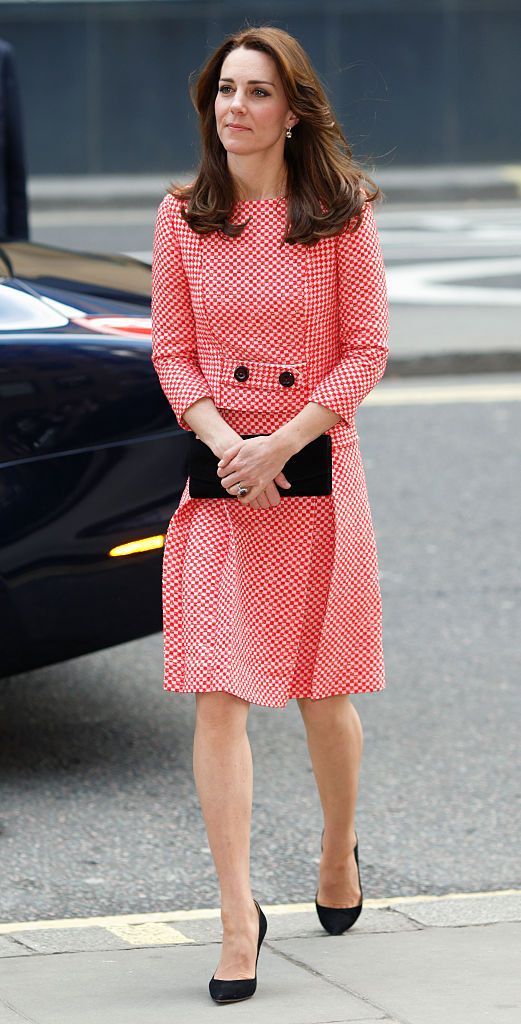 While Kate’s style is typically filled with sophisticated tea dresses and suits, she does have a glamorous red carpet moment a few times a year. One of her most memorable looks is this white flowing dress she wore in November 2016 which featured a thigh-high slit. 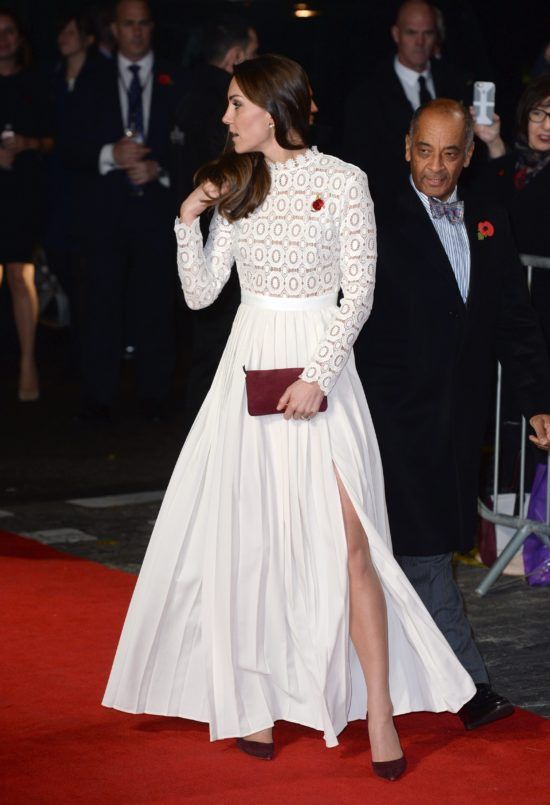 In July 2017, Kate and William visited Hamburg, Germany. For the occasion, Kate wore one of her most memorable ensembles of all time: this lavender-colored A-line dress. She’s repeated it a few times throughout the years and is definitely one of her most recognizable looks. 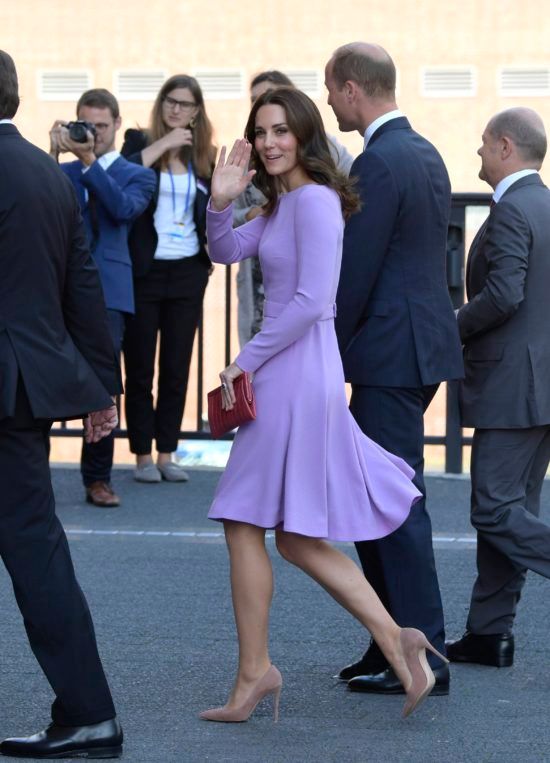 In 2017, Kate stepped out wearing this sleek aqua blue dress that was covered in beading and gemstones. This is definitely one of her more glitzy looks, but we love that she wore it in Paris, which is certainly a location deserving of a dress this fabulous. 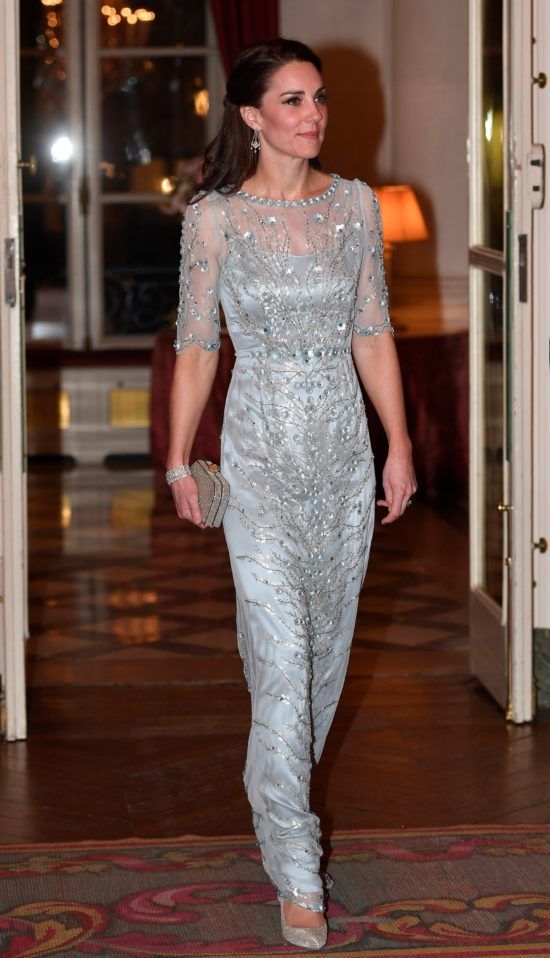 In 2017, Kate stepped out wearing a lace blue dress with black detailing that definitely received mixed reviews. While Kate’s style leans towards the more polished and sophisticated side, many began questioning whether her style was a little too safe and overly mature for her age. 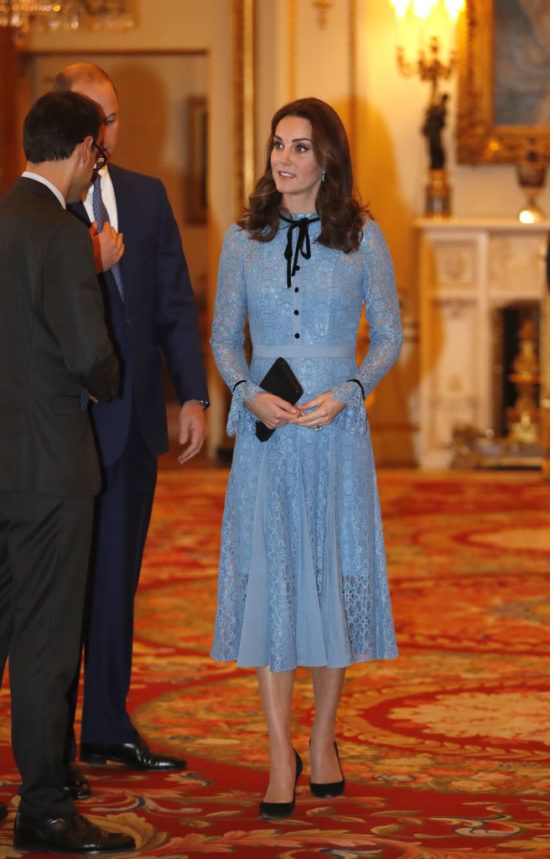 In April 2018, Kate stepped out wearing a red post-baby look for the duo’s third child, Prince Louis. The look was inspired by the red dress Princess Diana wore when she presented baby Prince Harry to the world. Kate, of course, updated the look with a chic lace peter pan collar. 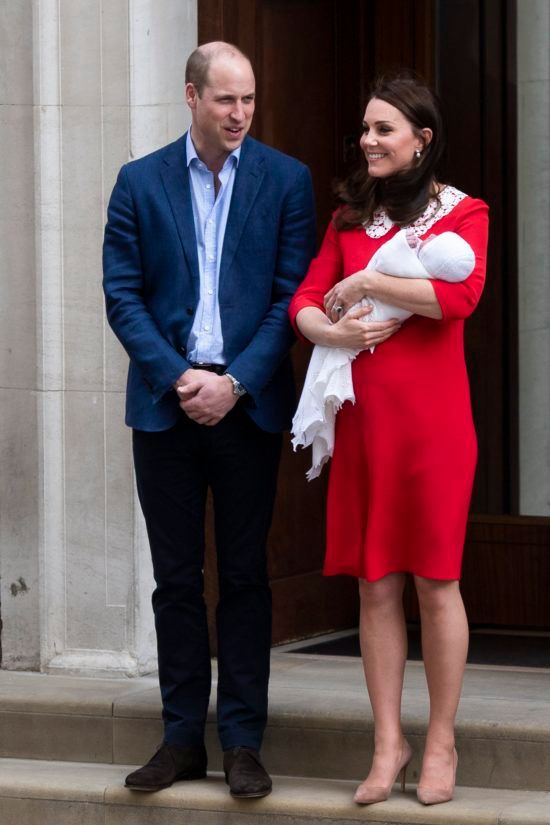 In November 2018, we began to see a new revelation in Kate’s traditional style. Perhaps Meghan Markle inspired her to begin dressing a little more trendy, but Kate looked gorgeous when she stepped out in this emerald coat dress in November 2018. In the past, Kate didn’t stray from classic shapes and pieces, so it was refreshing to see her incorporate such an in-the-moment trend like this padded velvet headband.

Kate once again wowed us when she stepped out in February 2019 wearing another bolder look. Of course, the outfit is still polished and elegant, but the trendy color blocking and velvet detailing certainly elevated the look and made it feel more fashion-forward. 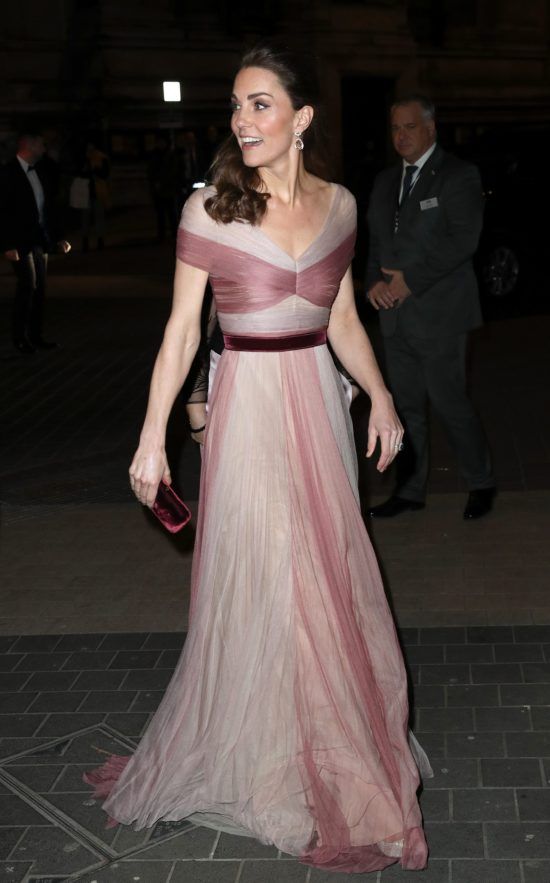 By late October 2019, Kate’s style evolution became even more apparent. Rather than tea dresses and tweed, the Duchess stepped out wearing trendy olive culottes paired with a textured plum blouse. Even her shoes were a little more trendy with a buckle detail and block heel! We can’t wait to see what Kate has in store for her 2020 style! 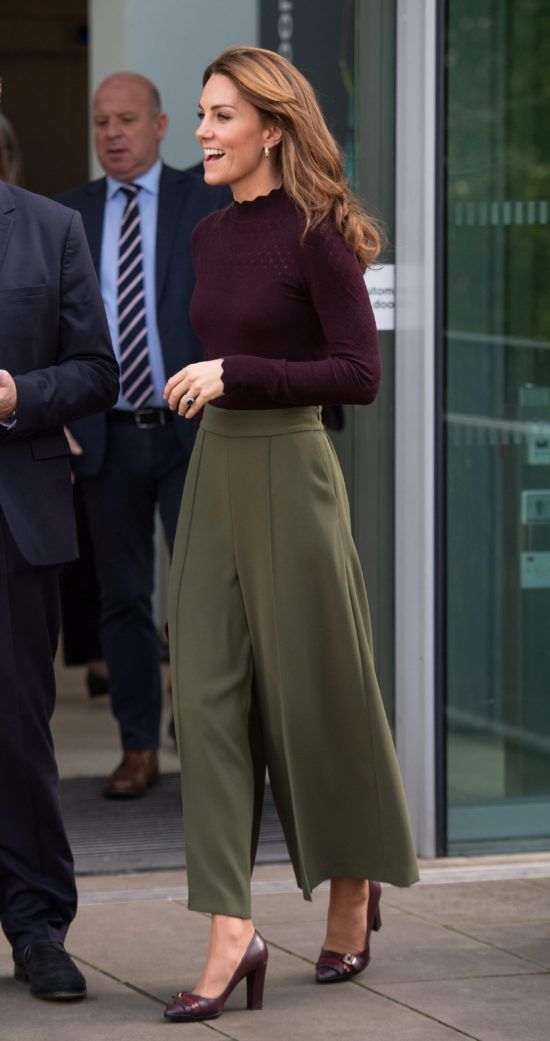 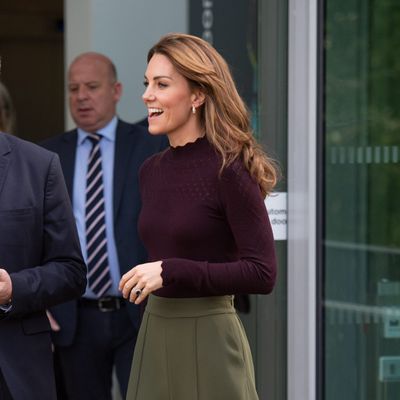