Former Suits actress-turned-princess Meghan Markle is on everyone’s radar these days after it was officially announced that she and Prince Harry were engaged. Her engagement coat was sold out within hours and each one of her public appearance looks has sent eager fans on a fashion hunt for replicas of the latest piece that Markle steps out in. Follow along for 12 of Meghan Markle’s best style moments following her engagement to Prince Harry:

Before Meghan and Prince Harry could even wed, the two announced that they were going to hit the ground running as an official married couple and would not be going on their honeymoon right away as they already had a royal duty to attend to. On Tuesday, May 22, three days after their wedding, the pair stepped out for the first time since their wedding as the Duke and Duchess of Sussex and Meghan’s look was dramatically different than almost anything else we had seen in her in. She fully embraced the role of Duchess and went for a traditional royal look with a pale pink-and-white dress with sheer detailing and a matching pale pink hat with her hair in a Kate Middleton-esque side chignon. Along with ditching her signal messy bun, for the first time, Meghan adhered to the royal protocol of wearing pantyhose, which she had previously rejected.

This Meghan Markle look is absolutely iconic! It’s definitely a look that her character Rachel Zane from Suits would wear with its tweed material, clean lines, and professional vibes. She paired the polished look with a pair of pointed toe metallic heels, a bright red tote bag, and her signature smokey eye makeup.

Meghan Markle undeniably turned heads when she stepped out for the Today show in New York wearing a fire red dress! The look featured a full A-line skirt that reached her ankles and a cinched waist that flattered her petite figure. She topped the look with chic nude heels and allowed her hair to sweep over one shoulder in loose waves.

As an actress that previously worked and lived in Toronto, Meghan is definitely no newbie when it comes to chic outerwear! In 2016, the actress was spotted wearing a chic wrap style coat in a rich navy shade. She paired the enviable outerwear piece with shiny leather trousers and fabulous strappy cream pumps. Her glossy locks swept over one shoulder and she added a wine-colored lip for extra glamour.

Navy seems to be one of Markle’s go-to colors and it’s hard to blame her for that! Navy is a softer, chicer version of black and looks great on basically every skin tone and hair color. This particular lace dress was one of Markle’s standout fashion moments. The dress was quite Kate Middleton-inspired and featured sheer lace sleeves, a minidress hemline and a flattering lace edging around the neck. Her auburn-tinted locks fell in classic beach waves around her shoulders and she kept the accessories minimal with a pair of simple nude pumps.

Meghan Markle is all about sophisticated cuts, minimal embellishment, and rich colors, which is the epitome of this look! The metallic number grabs attention with its shiny texture but is still relatively modest with its long sleeves and structured shape. She paired the look with a gunmetal smokey eye and clear accessories to add a trendy and contemporary twist to her outfit.

Meghan Markle rocked a stunning strapless gown at the Global Gift Gala in 2014! The dress featured a ruched side detailing that showed off her slender figure and long legs flawlessly. The cocktail dress was short and sassy but also extremely elegant, which seems to be an ongoing trend with the pieces in Markle’s wardrobe. To add even more class, Markle swept her hair into a polished side updo and wore golden chandelier earrings that matched with her clutch.

Markle’s dark features are the perfect match for rich, jewel-toned shades like this crimson colored dress! The brocade style print is highly elegant, especially with the sophisticated elbow-length short sleeves and high neckline. She matched her makeup to her outfit by rocking a wine-colored lip and dark smokey eye. For accessories, Markle wore a mirrored clutch and a pair of her go-to lace-up heels.

Markle was recently spotted wearing a gorgeous ankle-length skirt that many people compared to a look worn by Carolyn Bessette-Kennedy! The olive-colored skirt featured a figure-hugging shape that flared at the knees which she paired with a skinny leather belt. She matched the skirt with a black mock neck top and tucked her scrunchy black boots under her skirt.

Of all her looks, the engagement announcement outfit has got to be her most iconic to date! The cream Canadian-brand coat sold out within hours and the wrap-style shape was ultra chic and figure flattering. The light color of the coat made her complexion look even more glowy and the choice of strappy nude heels was the perfect match to stay true to her neutral color palette.

Leading up to Meghan and Prince Harry’s  May 19th wedding, anticipation was at an all-time high as many couldn’t wait to catch a glimpse of her wedding gown, but what they didn’t know was that it was her reception dress that was going to steal the show. After looking impeccable in a simple and elegant Clare Waight Keller of Givenchy gown for the actual wedding, Meghan got changed and stepped out for her evening wedding reception at Frogmore House in a jaw-dropping Stella McCartney gown. Much like the first gown, the reception dress had no lace or flashy embellishments, but it was certainly not needed as the Stella McCartney dress was more revealing and sexy with a high halter neckline and open back, which made Meghan look not only fantastic but absolutely ready to dance the night away with her new husband. 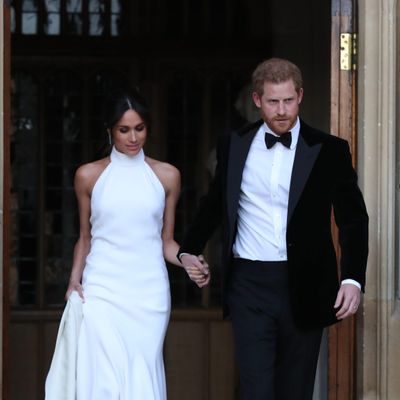