The Oscars red carpet is one of the biggest fashion events in the entertainment industry, and style winners and losers are judged before anyone even makes it into the event center and before the awards are handed out. Often overlooked, however, is the afterparty fashion, which is often much more exciting and sexier than the Oscar looks and did the stars ever deliver! There were many headturners (for reasons both good and bad) at the famous Vanity Fair afterparty including some of the big Oscar winners, as well as others who didn’t even attend the show. Check out some of the best and worst looks as the industry’s stars headed in to party the night away.

As stunning as Olivia Munn was on the Oscars red carpet, she made a poor decision to switch outfits before hitting up the Vanity Fair afterparty. The X-Men Apocalypse star is definitely gorgeous, but her Mendel dress with mid cutouts did her no justice. Her toned figure would look great in anything, but this dress just fell flat, not to mention her fit figure is starting to look a little too skinny.

Mindy Kaling did the reverse of Olivia Munn by absolutely killing it in her afterparty dress choice, but not wowing on the Oscar red carpet. The Mindy Project star was absolutely stunning in an original gown from costume designer Salvador Perez. Kaling took the “little black dress” to another level with a deep plunge, high slit and one side of embellished crystals. Also, her hair and makeup were completely amazing, setting off the look perfectly.

Brie Larson has been tearing up every awards show and red carpet this season, and while the incredible actress won big for Best Actress for her performance in Room, her afterparty look wasn’t award worthy. Larson’s Greek goddess inspired look went wrong in her blush pink, one-shoulder gown. The draped shoulder, awkward side cut-out and material were put together too haphazardly to be make an impact. She can do much better than this.

Alicia Vikander topped many best dressed list for her gorgeous yellow red carpet dress, and the accolades just kept on coming with her win for Best Actress in a Supporting Role. Her big night continued at the afterparty, where she switched in her yellow Louis Vuitton dress for another Louis Vuitton number. She rocked a black sequined floor length dress with full sleeves and a plunging neckline that looked like it was made for the star. Again, her makeup and hair made it one of the most beautiful looks of the night.

Gwen Stefani and Blake Shelton made their first major appearance as a couple showing up to the Vanity Fair afterparty hand-in-hand, but even he couldn’t distract from her dress choice. Stefani donned a Yanina Couture see-through dress, which seemed very Hunger Games girl-on-fire inspired. Stefani always makes bold fashion choices, but this one was too over the top. The sheer part didn’t seem to fit properly and the t-shirt sleeve didn’t seem inappropriate for the style. She definitely turned heads, but not in a good way.

It’s not an awards show unless Taylor Swift has made some sort of best dressed list, and the megastar singer did it yet again, but this time for her afterparty look. In a refreshing surprise, Swift ditched her usual crop top and skirt look for a very sexy, yet very sophisticated plunging Alexandre Vauthier Haute Couture dress. From the way the dress fit to her perfect blonde bob to her gold metal choker, every aspect of this look was amazing, and Swift just turned her style up a notch. 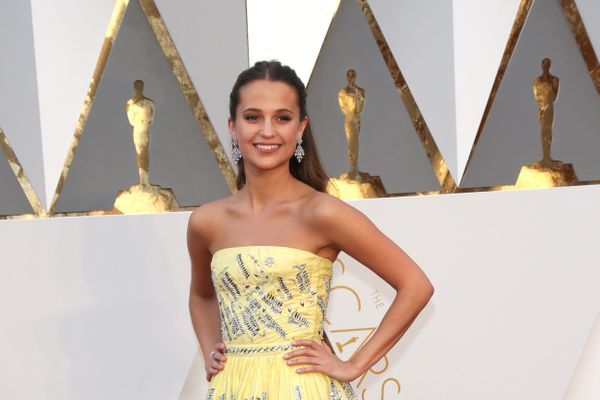