With every awards show, there’s always a guaranteed handful of stars that miss the mark and end up on the worst dressed list when it comes to fashion. This year’s People’s Choice Awards was no exception! While there was an extensive list of best dressed looks, there was also a few looks that weren’t the most flattering. Follow along as we recall some of the most disappointing looks from this year’s 2018 People’s Choice Awards red carpet:

Actress Danai Gurira, best known for her role on The Walking Dead, stepped out at the People’s Choice Awards in quite a chaotic look this year. While we love the bustier-inspired features of the bodice, the rest of the dress just didn’t seem to flow together. From the colorful panels to the feathers and polka dots, there was simply too much happening with this look.

TV personality Giuliana Rancic stepped out on the People’s Choice Awards red carpet looking like a shimmering disco ball, but unfortunately, not in a flattering way! Her look featured a tuxedo-inspired shape which we loved, but the bra-revealing neckline wasn’t a good look in our books. We would have much preferred a sleeker, more modest shape and neckline with a tuxedo dress like this.

YouTube personality Jackie Aina stepped out on the People’s Choice Awards red carpet wearing this eye-catching yellow leopard print dress. While animal print has been a huge trend this fall, we’re not sure Aina pulled it off in the best way possible. The bright yellow color made the print come across a little cheap and the oversized belt definitely detracted from the look as a whole.

Vanderpump Rules star Lala Kent stepped out wearing a nearly-naked dress that featured glitter, cutouts and sheer paneling galore. Unfortunately, her transparent frock was far too revealing for our taste and her fully exposed side felt quite risque for a formal and classy award show affair.

Former Big Brother star and actress Aisha Jade was another star who stepped out on the People’s Choice Awards red carpet in a garment that was a little too revealing for our liking. Her embellished dress was completely sheer and revealed a bodysuit-like underlayer. The dress itself was quite pretty with the floral embellishment, but we simply would have preferred if Jade opted for a full-length slip to be a little more modest with her look.

Scarlett Johannson is typically a red carpet all-star, which is why we were quite disappointed with her look for this year’s People’s Choice Awards. Rather than a gown, the star opted for a pants-and-top combo that was belted. In comparison to some of her classy red carpet counterparts, the look just felt a little under-dressed and overly exposing.

Professional wrestler and actress Brie Bella stepped out on the People’s Choice Awards red carpet in this bold monochrome look that was unlike anything we’d seen at the event! While she definitely stood out, we’re not sure it was for good reason. The pants seemed to pleat in all the wrong places and the oversized balloon-style sleeves drowned her toned figure.

Busy Phillips stepped out at this year’s People’s Choice Awards in a look that had us totally confused. Phillips is such a beauty that we’re not sure why she opted for a drab black look that totally overwhelmed her figure. We love tiers, ruffles, and feathers, but it’s important to use these trends in moderation, which is what Phillips missed the mark on.

Actress and comedian Retta stepped out wearing this bright blue look for the People’s Choice Awards this year. While we aren’t opposed to eye-catching colors by any means, we’re not sure this type of color scheme worked for the November awards show affair. The green and blue shades seemed to be fighting with each other for attention and the entire look seemed more appropriate for spring or summer than late fall.

Christina Hendricks took the ultra-casual route for this year’s People’s Choice Awards where she donned an army green jumpsuit covered in patches and badges. While the utility jumpsuit has been a huge trend this fall, we’re not sure this was the appropriate outfit choice for a formal award show red carpet. We would have much preferred to see Henricks in a gown or at least a jumpsuit with a more formal fabric. 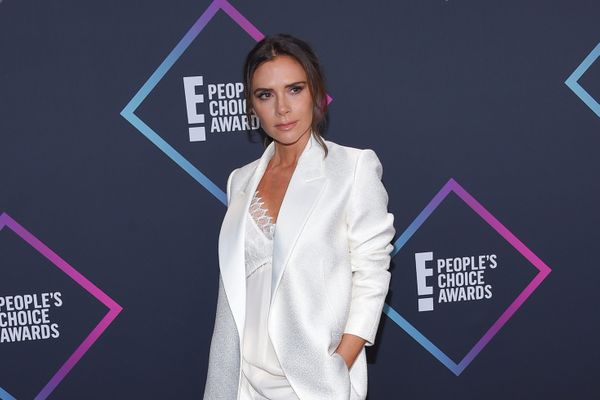