Victoria Beckham’s alter ego as Spice Girl “Posh” couldn’t have been a better choice in name for the chic fashionista. The star has gone through quite the transformation from her days in  the popular girl band, but as an entrepreneur and fashion designer she now has completely solidified her iconic sense of style. Beckham is best known for her minimal style that incorporates many black and neutral pieces that are tailored and sophisticated. She is constantly seen rocking her thick-framed diva sunglasses and has mastered the art of the most flattering paparazzi pose. Follow along for 8 of Victoria Beckham’s most iconic style moments:

Victoria Beckham looked like a life-sized Barbie doll when she stepped out onto the field to support David Beckham as he became the newest member of the Major League Soccer Club LA Galaxy. Beckham’s style has definitely evolved when it comes to color since this 2007 appearance and mostly opts for all black ensembles nowadays, but we couldn’t help but taking a moment to appreciate this bubblegum pink creation! Diva status at its finest, bravo Beckham!

The detailed Marc Jacobs dress that Victoria Beckham rocked at the 2008 CFDA Fashion Awards is undeniably one of her most memorable looks. The textured mini dress featured heart embroidery covering the entire dress and a glamorous one shoulder neckline. She gave herself an hourglass figure by adding a dark belt at her waistline, which broke up the monotone nature of the look. She topped the look off with sky high platforms that feature a uniquely shaped heel and wrap around details around her ankle. Absolutely flawless!

Beckham once tweeted that the airport is her fashion runway and this comfortable yet trendy outfit definitely rings true to her motto. She stepped out earlier this year in April wearing a trendy graphic tee with red print and a pair of dark wide leg trousers. The entire look is perfect for the airport by allowing maximum comfort with loose fitting pieces, yet is still super put together and sophisticated.

Victoria Beckham looks straight from a Hamptons photo shoot with this bright tangerine colored Donna Karan dress. Only Beckham could pull off wearing a pair of diva sunglasses indoors and look fabulous doing it! The draping of the dress flatters her curves in all the right places and the neon color complements her olive complexion flawlessly. She topped the look off with coordinating Versace strappy heels and flaunted her best runway model pose.

Staying true to her timeless yet chic style, Beckham was spotted leaving the Chelsea Hotel in New York donning a sophisticated trouser ensemble. She allowed the plaid trousers to really steal the show by keeping the rest of her look neutral and minimal. She added a feminine twist onto the boxy cream turtleneck by tucking it into the side of her tailored pants. She added a pair of stiletto muted booties and a neutral brown clutch to complete the polished ensemble.

The tailored ensemble that Beckham rocked at the Viva Forever! premiere in 2012 is definitely the epitome of her minimal chic style. The star wore a pair of wide leg black trousers slung around her hips with a simple button up white top and black pumps. To add an extra element of visual interest Beckham draped a maroon long-line peacoat over her shoulders. The entire look is effortless appearing with the timeless and basic pieces, but the simple act of draping the coat over her shoulders adds so much glamour.

In 2015 Victoria Beckham was spotted at the LAX airport rocking a classic and chic airport ensemble. She singlehandedly proved that some pieces simply will never go out of style — like this chic taupe trench coat! A piece like this has been in style for decades and never fails to look polished and on trend. She paired the classic outerwear piece with a simple white tee, distressed denim and pair of bold cheetah print pumps for a pop of print and color.

Victoria Beckham’s Good Morning America look from 2015 is definitely the epitome of her sophisticated sense of style. The look channeled major Audrey Hepburn vibes with the classic Little Black Dress silhouette yet she added her own trendy twist on it with the frayed hemline. She paired the body-hugging dress with a pair of black stiletto pumps and rocked her typical diva sunglasses. The look is chic, sophisticated and totally Victoria Beckham in a nutshell! 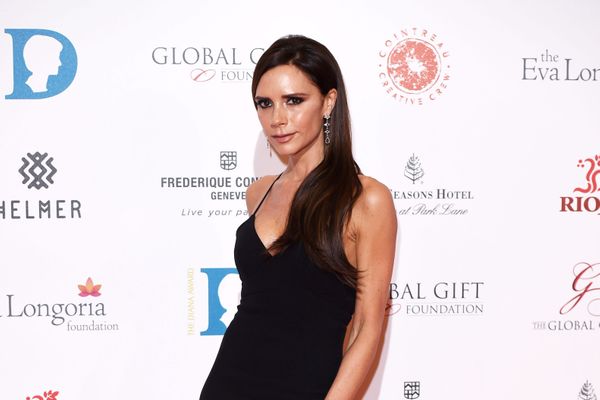