Featureflash / Shutterstock.comWe’re all still buzzing about Sunday’s MTV Movie Awards 2014, where all the hottest stars did some surprising things (including Zac Efron’s abs).

Fashion was unpredictable, as were the performances, speeches and video clips. Check out the video for a countdown of the 12 best moments!

We’re definitely excited about the upcoming movie The Fault in Our Stars (based on the book by John Green). A sneak peek of the film shows characters Hazel and Gus meeting for the first time — something fans were especially stoked about.

Another fun video clip was a comedy short starring Andrew Garfield, Emma Stone, Conan O’Brien. What happens when Spiderman forgets his computer password? It has something to do with Harry Styles…seriously!

Of course, it wouldn’t be an MTV show without great performances, and Ellie Goulding did not disappoint with her live rendition of “Find You.” Even more buzzworthy, though, was Rihanna’s and Eminem’s performance of their huge hit “Monster.” It was their first time doing the song live, and it was amazing!

The speeches involved a lotta dudes getting emotional, from Mark Wahlberg dropping f-bombs to Jonah Hill unabashedly talking up his bromances with hunky co-stars Channing Tatum and Leonardo DiCaprio. Channing also had his own moment in the spotlight, and he even seemed a little nervous accepting the Trailblazer award!

The crowd got emotional, too, during the show’s tribute to the late Fast & Furious star Paul Walker.

And then of course there’s the Best Kiss Award, which inspired some celebs on stage to start lip-locking randomly. Anything can happen with that one!

We haven’t even gotten to the #1 best moment — take a look at the video to see it! 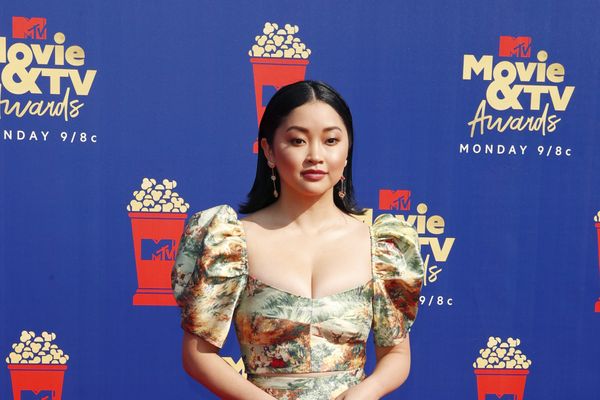