Every season of The Bachelorette brings its whole new set of drama, and it is safe to say that Becca Kufrin has had more than her fair share of interesting contestants. Through all of the fights and accusations she has managed to narrow it down to her final four, and as always fans have their own opinions on who she should pick! For those who love a good spoiler and can’t wait to find out which of the four she really loves, Reality Steve has all the information we need!

Reality Steve has become infamous for his spot on spoilers even before the season begins to air and he has been completely right so far, so read on to find who gets eliminated next and who ends up winning Becca’s heart!

For the fan favorite Hometown Dates episode, Becca heads off to Buffalo with Jason and the pair enjoy an adorable skating date before she meets his parents and interestingly enough because neither Jason or his parents actually live in Buffalo anymore, they had to rent a house from a producer’s friend to stage as a place to meet. She then goes to two different cities in Colorado for dates with Blake and Colton, and then ends up in California with Garrett where they do a tour of his old high school and visit his parent’s farm.

Although all four dates seem to go great, Colton gets unfairly knocked down when his ex, Tia, shows up to declare she still has feelings for him. In the end, Becca decides that Colton is not the man for her and sends him home.

With Colton out of the picture, Jason, Blake and Garrett are the lucky final three who get to travel to Thailand with Becca for the overnight dates. There is no telling what really happens on these dates but regardless someone has to go home and Becca eliminates Jason meaning Blake and Garrett are her final two!

It’s a tough choice between two charming men but in the end Becca chooses Garrett and leaves Blake heartbroken. As has been spoiled especially by TMZ, Garrett does propose and as far as we know they are still happily engaged but fans will have to wait until after the finale on August 6 to know what is happening with the couple now!

Get to know more about Becca’s final four with these interesting facts! 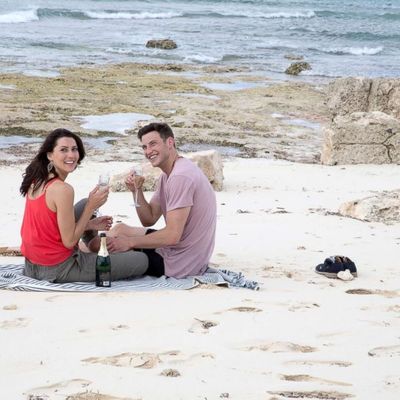