Dancing With The Stars Recap: A Night At The Movies

Last night’s episode of Dancing with the Stars had an exciting theme that paid homage to the classics – a night at the movies! Aside from the creative routines and extravagant costumes, the night also featured another lovely surprise, guest judge Shania Twain! Follow along for a recap of everything that happened on last night’s episode:

Nikki Bella and Artem Chigvintsev performed a tango routine inspired by the foreign film category. The performance was intense and sharp and landed them with a high 36/40. Tying with this duo was Vanessa Lachey and her partner Maks Chmerkovskiy who performed a quickstep that paid homage to musicals. Landing just above these two routines was Terrell Owens and Cheryl Burke who received a 37/40 for their jive inspired by the spy genre.

Near the bottom of the pack was Drew Scott and Emma Slater who landed a 30/40 for their action film-inspired paso doble. The high-energy routine was quite the hit with fans, but not so much for the judges. Just above the pair was Victoria Arlen and partner Val Chmerkovskiy who landed a 31/40 for their hockey-themed routine. Canadian Shania Twain was definitely a huge fan of the innovative performance! Tying with Arlen was Frankie Muniz and partner Witney Carson who also landed a 31/40 for their ’70s inspired jazz routine. Bruno called the routine a “psychedelic treat” despite the couple losing their footing a few times.

Jordan Fisher and Lindsay Arnold won the first perfect score of the season last week, so the pressure was definitely high for these two to measure up! Although they didn’t receive a 40/40, the couple definitely still rocked their rumba inspired by the drama genre and were awarded a 39/40. Lindsey Stirling and Mark Ballas received their first ever perfect score of 40/40 and definitely posed a threat for Fisher and Arnold with their sci-fi themed tango! “It is the best dance of the season,” Bruno said simply.

Unfortunately, by the end of the evening three couples were in jeopardy – Nick Lachey and Peta Murgatroyd, Terrell Owens and Cheryl Burke, and Victoria Arlen and Val Chmerkovskiy! It was ultimately Nick who was sent home after scoring a 26/40, the lowest score of the night, for his Western-inspired samba. “I enjoyed it,” the singer shared before his departure. “I came in not a very good dancer, going to leave not a very good dancer, but I’m proud of the effort I gave.”

Dancing with the Stars airs on ABC Mondays at 8 pm. 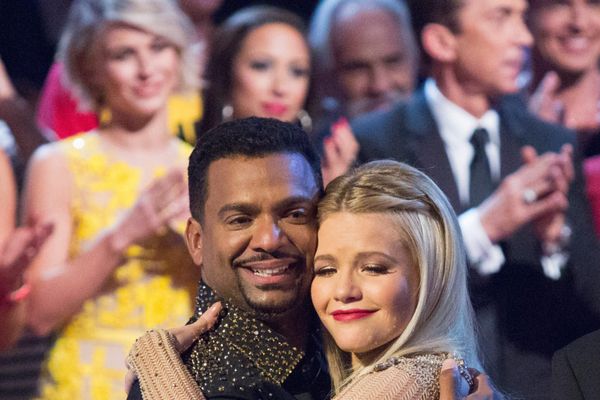