Donnie Wahlberg Opens Up About Mark Walhberg Skipping His Wedding

Donnie Wahlberg stopped by for a chat with Howard Stern, and the two talked about all things, including some silly TMZ report that Mark skipped Donnie’s wedding last August because the brothers aren’t very close, and Mark wasn’t particularly fond of Jenny McCarthy.

One can deduce accuracy by the first of the two statements made. First, that the brothers aren’t close. That’s absurd. Yes, both brothers are exceptionally busy, and they don’t get to spend a lot of time together, and they may not be the closest of all the brothers in the family… but not close? Absurd.

When Donnie and Jenny got married, it happened to be on Mark’s daughter’s birthday. That particular Wahlberg clan already had plans for the day. And if you have children, you know you can’t drag a young child to a wedding on their birthday. It’d be disaster waiting to happen. And Donnie was cool with that. The ceremony lasted a whopping 20 minutes.

Still, Donnie reassured fans that all is well between the brothers. Mark and family sent a well-wish tweet to Donnie and Jenny on their wedding day, and really, is it too much to say we’ve blown the whole wedding thing out of proportion anyway? It probably means much more to Donnie that Mark offers support for the marriage, long-term, than serving as a member of the party on the wedding day.

In kind, Donnie wasn’t at Mark’s wedding back in the day, because he was working.

This is probably where TMZ got the fuel for their fire, and perhaps there is some truth in the mix somewhere, but bottom line this was in August 2014… It’s April 1st… 2015. Why are people still asking the Wahlberg brothers about this stuff?

To see what Donnie had to say about his brother’s absence, check out the video below. 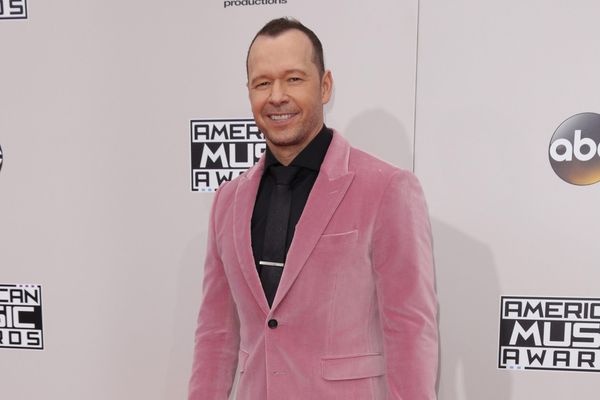