The Price Is Right host Drew Carey is calling for change in domestic violence laws after his ex-fiancée, Amie Harwick, was tragically killed following a fall from a balcony after allegedly being attacked by a former boyfriend.

On Tuesday, Carey shared a petition “Justice 4 Amie” that aimed to update laws for victims of domestic violence.

“Please sign this petition and chip in if you can. Thank you and bless you,” he wrote on Twitter.

The petition was created by Harwick’s friend Diana Arias. Harwick was a well-known family and sex therapist.

“Domestic Violence is a serious concern for everyone,” the petition read. “I recently lost a wonderful friend, Dr. Amie Harwick. She was murdered as a result of poor laws not protecting the victims and treating the offenders. I refuse to let her death be in vain. She was a doctor in the mental health field and advocate in the community. We need to do the same and advocate for Amie.”

The petition proposes that California lawmakers should prevent restraining orders from expiring and require stalkers/abusers to take mandatory in-person, long-term counseling. It also calls for California lawmakers to allow victims to have the choice of whether or not they want to testify against their abusers and introducing a stalker/abuser registry “made to warn others of the deviant behavior.”

“People shouldn’t have to die to make changes. If Amie’s murder can save countless others’ lives like she was doing when she was alive then it makes this pain of her death not in vain,” the petition added.

The petition is asking for 600,000 signatures to support the effort.

The Los Angeles Medical Examiner announced on Tuesday that Harwick’s autopsy had been completed, and revealed she passed away from blunt force injuries to her head and torso. In addition to the injuries, Los Angeles Medical Examiner Public Information Officer said they found “evidence of manual strangulation” and Harwick’s case had been ruled a homicide.

On Saturday at 1:15 p.m., police responded to an alarming call of a “woman screaming,” the Los Angeles Police Department revealed in a press release.

The officers then checked the residence and found Harwick unresponsive, lying on the ground beneath a third story balcony.

She was later transported to a nearby hospital where she late passed away. Harwick was 38 years old.

Drew Carey broke his silence about Harwick’s passing in a statement on Monday, saying, “Amie and I had a love that people are lucky to have once in a lifetime.”

“She was a positive force in the world, a tireless and unapologetic champion for women, and passionate about her work as a therapist. I am overcome with grief,” he added. “I would like to thank you in advance for giving myself and everyone who loved Amie privacy while we try to work through this tragic situation.”

Please sign this petition and chip in if you can. #JusticeForAmie
Thank you and bless you 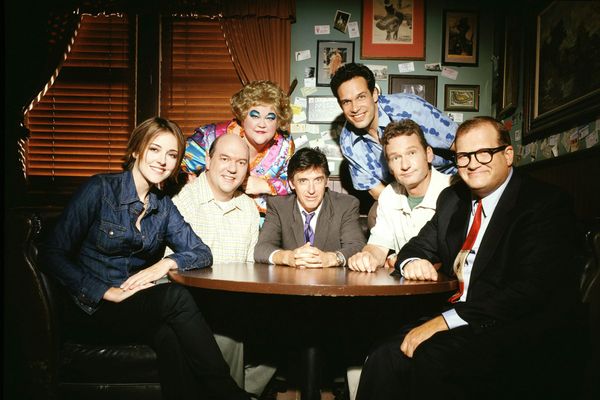 Cast Of The Drew Carey Show: How Much Are They Worth Now?