During JoJo Fletcher’s entire season as The Bachelorette, many questioned Jordan Rodgers intentions of being on the show, but despite everyone’s assumptions, they are one of the few Bachelor Nation couples still going strong and it looks like they might finally be ready to tie the knot.

“It’s happening,” Fletcher said of the impending wedding adding that it will most likely happen in the “spring or summer” of 2020. “We want an outdoor wedding in California either Malibu, Napa or Santa Barbara,” she says. “We’re going to tour and lock in a venue sooner rather than later.”

She also opened up about many questioning their relationship because they didn’t rush to the altar like many other Bachelor Nation couples. “In the beginning, we had more of the ability to say we’re going to date and court each other, but then three years go by and we started to feel like people were annoyed by it. They’re like, ‘You’re never going to get married!’”

“We wouldn’t change it,” she added. “Without having those years to go through different seasons of life together and learning how to navigate through the good and the bad, I wouldn’t feel as confident. It was important for us to know that this was what we wanted for the rest of our lives. I’m happy we waited. But now we’re good to go!”

The couple also recently bought their first home together in Dallas and recently filmed a new reality series called Cash Pad that follows them as they fix short-term rental properties. “We’ve had the best time,” Fletcher said of the show. “When it’s stressful, obviously you’re going to butt heads, but I am shocked with how little we have big disagreements.” 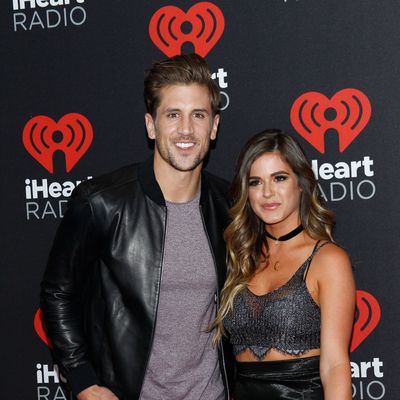