The moment we’ve all been waiting for has arrived — we’re finally able to catch a glimpse of Meghan Markle’s budding baby bump! The Duke and Duchess of Sussex, Prince Harry and Mrs. Meghan Markle, are currently on their 16-day Royal tour where they’ll journey through Austrailia, New Zealand, Tonga and Fiji. The Royal duo announced Markle’s pregnancy just before setting off on the tour, which makes their public appearances all the more excting throughout the journey, especially when it comes to Meghan’s maternity style!

So far, she’s kept her bump relatively modest and we’ve hardly even noticed it. Most recently, however, the duo attended a reception and dinner hosted by the president of Fiji after landing in the country where Meghan wore a sleek dress that had her budding bump on full display. The mother-to-be donned a full-length blue gown by Safiyaa which had a relatively simplistic cut, but featured a dramatic cape detailing which trailed behind her. The color worked fabulously on Markle’s complexion and dark hair, while the shape of the dress really showed off her budding baby bump like no other dress has before. We can’t wait to see more of Meghan’s stunning maternity fashion moments like this one!

Check out the full look below:

This isn’t the first time Meghan Markle stepped out with a winning fashion moment! Check out some of her best Royal fashion moments so far:

The Duchess of Sussex Meghan Markle has always been stylish, even during her Hollywood days before being connected to Prince Harry! Markle is all about outfits that exude effortless sophistication and has carried this style practice into her public appearances as a royal. She seems to have elevated her laidback Toronto style into a more polished professional look that is appropriate for a Duchess, yet still remains true to her own personal taste. Follow along for all of her best royal fashion moments so far:

Kate Middleton is known for wearing her sleek, summery dresses when she’s spotted in the stands at Wimbledon. Meghan Markle, however, has taken a new approach to dressing for the annual tennis championships. This year the Duchess opted for a blue and white striped button-down paired with white linen trousers and held a white wide-brim hat in hand. We love that Meghan prefers to opt for trousers than dresses on occasion and think this look was the perfect choice for a sunny afternoon in the stands.

On July 26 Meghan Markle proved that she knows how to dress impeccably well for a heatwave! The star stepped out in a flattering Carolina Herrera dress which featured a chambray texture and a statement belt cinching in her waist. She pulled her hair back into a low-key bun and held a woven bamboo clutch in her hand. It’s truly the details that make Markle’s style standout from the rest and prove that she’s not only modest and professional but also a fashion-forward trendsetter.

Meghan Markle dressed in a chic olive green dress designed by Ralph Lauren for St. Louis Christening earlier this year. The color of this outfit truly flattered Markle’s complexion and we love that all her accessories down to the gloves, purse, and shoes matched accordingly. The look was conservative, which was definitely appropriate for the religious event, yet still fashion-forward and savvy.

Meghan Markle stepped out in July wearing a striking little black dress designed by Dior for the RAF Centenary at Westminster Abbey, London. The dress was quite similar to her wedding dress with its simple shape and bateau neckline. She dressed the look up with a chic fascinator and nude pointed heels. She also pulled her hair back into a sleek bun which really showed off the flattering neckline of the dress and her petite frame.

Meghan Markle recently stepped out for her first solo appearance with the Queen wearing this chic and sophisticated taupe dress. The dress was designed by Givenchy which is the same designer that created her highly anticipated and iconic wedding gown. Her wedding gown also had an off-the-shoulder neckline which has proven to be the Duchess’ go-to for many of her royal public appearances so far.

In early June the Duchess of Sussex stepped out wearing this crisp off-the-shoulder dress which featured buttons trailing down the front. She paired the look with a matching soft pink fascinator in classic royal style. Her look caused quite the stir with the public and many deemed the off-the-shoulder neckline inappropriate for a royal engagement. We, however, think she totally rocked this look and that the neckline was super elegant.

Meghan Markle stepped out in late April wearing this chic taupe coat for a morning memorial service in honor of Anzac Day. The style moment was well-received by fans and many fawned over the fact that her navy wide-brim hat perfectly coordinated with Harry’s longline navy coat. These two make a seriously fabulous power couple when it comes to fashion!

In mid-February Meghan Markle stepped out wearing a chic duster coat by Burberry for a visit to Edinburgh. The plaid coat was highly appropriate for the appearance and clearly paid homage to Scotland with its classic print. She paired the look with a crossbody bag that coordinated perfectly and was quite low maintenance as she greeted the crowds.

Meghan Markle has broken quite a few royal dressing traditions, one being that she often opts for pants over skirts! Kate Middleton and Queen Elizabeth rarely wear trousers which is why this particular Markle outfit was quite groundbreaking. We love that Markle continues to dress true to her own personal style despite her new royal status, especially because she looks super chic and sophisticated in a strong power suit!

In late April of 2018, Meghan Markle stepped out wearing this sleek and polished little black dress for a Women’s Empowerment reception in London. The dress was highly buzzed about because it closely resembled a look that Jackie O wore dubbed the “Jackie belted dress.” Many believed Meghan’s look was intended to pay homage to the ultra-stylish First Lady.

Meghan Markle stepped out looking prepped and primped for spring when she rocked this pleated green dress to attend the Invictus Games Sydney celebration reception. The Self-Portrait number featured a V-neckline, ruffles along the bodice and a mid-length skirt. She paired the look with a sleek blazer which added an air of sophistication and formality to the soft, feminine dress.

The afternoon before her wedding Markle stepped out to greet her mother as she arrived in London wearing this sleek navy number. The bride-to-be was all smiles as she stepped out of the limo wearing this Roland Mouret ruffled dress. The neckline of the garment is clearly a Markle favorite and is the same boat-shaped style she rocked one day later on her wedding dress to marry Prince Harry.

Markle proved just how stylish she truly is with this look she rocked on December 1, 2017. The trend of knee-high boots paired with a midi length skirt was huge during the fall and Meghan jumped on board yet styled it in the most classic way possible. Many compare this look to that of Carolyn Bessette Kennedy, who Meghan has admitted is one of her greatest style icons.

Meghan Markle proved she could blend seamlessly into British fashion when she stepped out on the arm of Prince Harry for this year’s Christmas reception. She rocked a classic British fascinator in a chocolate color which matched perfectly with her boots. In classic Meghan Markle fashion, she rocked a taupe wrap coat which quickly became her signature look during the winter months this year.

Meghan is a huge fan of sleek shapes and minimal pattern when it comes to her style and this outfit is the perfect example of that. She visited Ireland wearing a mermaid-cut olive skirt and a cream cashmere sweater designed by Victoria Beckham. To top her look, she wore a taupe wrap coat and pointed toe velvet heels. The true standout style element of this look is her tousled messy bun! Previously it was expected for royals to have prim and propper glossy curls, but Meghan broke boundaries and stayed true to her own low key style with the bun.

We couldn’t have a Meghan Markle style roundup without mentioning her highly anticipated wedding dress! There were many mixed reviews when it came to her dress, but when it comes down to it, the dress rang very true to her style. She favors pieces that are quite low maintenance and simple, which is why a sleek long sleeve dress with a subtle boat neck collar was the perfect choice for her fairytale day!

One of Meghan Markle’s most iconic looks to date is the outfit she wore to announce her engagement to Prince Harry back in late November of 2017! The fashion moment became instantly infamous and created the “Meghan Markle effect” which caused the crisp white wrap coat to sell out within minutes of the appearance. The wrap coat has become a staple for Markle and one that we have come to expect from her during the colder months.

Another royal fashion moment worthy of note was the outfit that Markle wore in her official engagement photo shoot with Prince Harry! The Ralph and Russo number she wore came as quite surprising due to its sheer bodice and expertly placed embellishment. We personally love the romantic vibes of ruffled skirt and sheer bodice, but the look definitely stirred some controversy for being overly risque for a soon to be member of the royal family.

One of Markle’s chicest looks was the outfit she wore in mid-March for a Commonwealth Day service at Westminister Abbey. Her look consisted of a sleek and sophisticated white coat, a mid-length navy dress and matching navy pumps. She added a little flair by topping her outfit with a beret which sat perfectly on the side of her head. We love how this classy look is both traditional and trendy in the perfect combination!

One of Markle’s most stunning fashion moments was when she stepped out in late May for her first public appearance as Prince Harry’s official wife and the Duchess of Sussex. The soft blush pink look was glam with the dramatic fascinator yet still feminine and highly modest. She even wore a pair of stockings for good measure and looked every bit a Princess!

One of Meghan Markle’s boldest royal looks so far is this sophisticated yellow dress she wore for a Commonwealth event in London. Previously, she had stuck to a relatively neutral wardrobe palette filled with blacks, blush pinks and nudes, so the bright canary yellow gown was a lovely surprise. Aside from the color, the midi dress also fit her body perfectly and featured an elegant bateau neckline which has seemingly become her signature.

1. May 19, 2018
Of all of Meghan Markle’s royal looks so far, the favorite has got to be the sleek white dress she changed into following the civil wedding ceremony! Again, the look was quite simple, but the halter neckline and sleek shape really brought the glamour. The dress fit her like a glove and opting to pull her hair back to show off the neckline was the perfect touch. 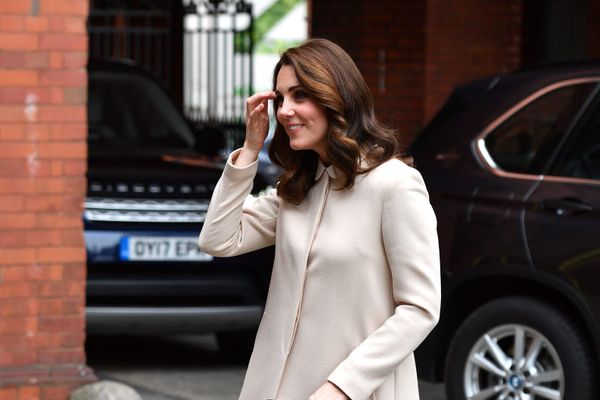 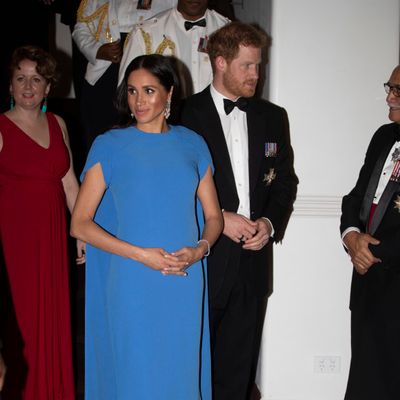