Hugh Jackman has a reputation for being the nicest guy in Hollywood — so why did he make a fan cry on the red carpet of X-Men: Days of Future Past?

Because she was so excited and star struck that she cried tears of joy!

Fans camped out to catch a glimpse of Hugh and his fellow co-stars at the premiere of the latest installment of the X-Men franchise — and one young woman dubbed Hugh’s “ultimate fan” was chosen to come on to the red carpet to meet Hugh, who plays Wolverine in the film.

She was a little scared to come up and actually meet her idol, but he was sweet and gracious as you’d expect. “She was so nervous,” the host explained as the fan broke down in tears. Hugh gave her a hug to calm her down  before they took a photo together — check out the video to see the adorable fan interaction!

“I love it. These guys are awesome,” Hugh gushed about the movie’s fans. “We have the greatest fans. I guarantee, you would not be here without them.”

But one person in Hugh’s life isn’t that impressed by his famous dad: his son. Hugh says his so doesn’t think he’s cool, and makes a point to tell people that his dad is nothing like Wolverine.

Also Check Out: 16 Celebrities Who Will Do Anything For A Fan! 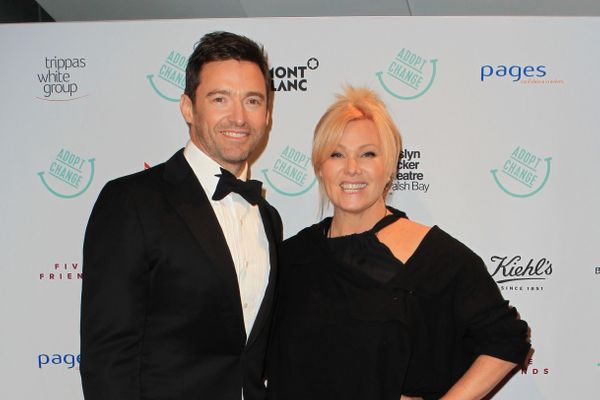