Jimmy Fallon starred in his very first Super Bowl ad and released it ahead of the big game on Sunday!

The ad begins with one-on-one weight training between Fallon and Cena, where the 45-year-old Tonight Show host sends his kettlebell flying through the window. Next, Fallon is at a bar and tells Cena, “Working out sucks!” right before the commercial transitions to how many sports and exercises Fallon has attempted.

Of course, Fallon brought along his Tonight Show band The Roots!

Viewers can see Fallon struggling to keep up with Cena on a runner’s track while grunting, “This is it! This is how I die!” just as the band makes their entrance as Fallon’s personal cheer squad. Then things take a turn when Olympian Usain Bolt shows up on the track to shout: “Still got it, Jimmy!”

As Fallon gets more comfortable exercising and starts to love it – even though he pales in comparison to other athletes like golf pro Brooks Koepka and volleyball stars Kerri Walsh Jennings and Brooke Sweat, who make a 60-second cameo in the commercial. All this exercise leads up to a football field where Jimmy dodges and sacks a remote-controlled dummy. “I’m so proud I could squat you,” Cena says to Fallon, as he embraces him.

So many people loved the Super Bowl ad, that it’s been viewed on Youtube more than 800,000 times since it’s debut on Tuesday, January 28.

Although the commercial is hilarious, Fallon said he “was so sore” from either “the Michelob Ultra or working out.” He shared with Today that he “lost 10 pounds doing that commercial.” In the same interview, he shared that an advertising agency reached out to him saying they stumbled upon a photo of Fallon at the gym and was looking for someone who “hates working out but loves beer.” Fallon, who has shared he is a beer fan and not a fan of working out, was clearly perfect for the role! 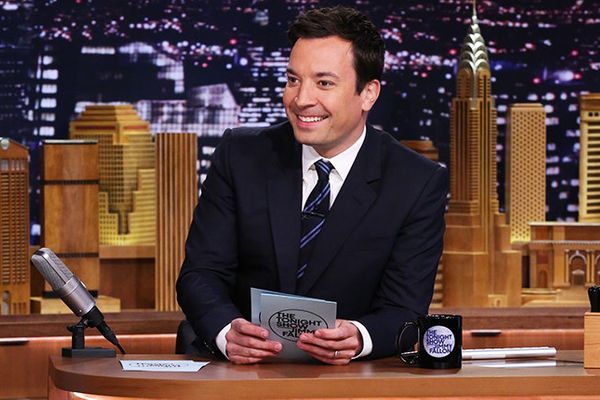