The Friends reunion special will begin filming in March, according to former Friends star Matthew Perry!

Perry shared an update on the highly anticipated reunion and announced that the special is being rescheduled to begin filming in March 2021, which marks over a year after the reunion was first announced. HBO Max shared with EW that plans are still being finalized, but confirmed Perry’s comments that early next year is being targeted for filming.

“Friends reunion being rescheduled for the beginning of March,” Perry wrote in a tweet on Thursday. “Looks like we have a busy year coming up. And that’s the way I like it!”

The reunion special will be unscripted and will bring together the NBC sitcom’s six main cast members on screen together again for the first time. The special was originally planned to debut on HBO Max alongside the streaming service’s May launch date, but the production faced many delays due to ongoing global health concerns. In August, filming for the special was postponed indefinitely.

“The truth is, we’ll do it when we all determine it’s safe to do so,” Schwimmer told EW in July. “There’s no question we want to do it and it’s going to happen. It’s just really a question of when will be the safest time to do it.”

The special will reunite David Schwimmer, Matthew Perry, Jennifer Aniston, Courteney Cox, and Lisa Kudrow on the original Friends soundstage on the Warner Bros. studio lot. The co-creators of the series Marta Kauffman and David Crane will also join them. The group will chat and reminisce about working on the series in an unscripted way, which should lead to some interesting conversations. 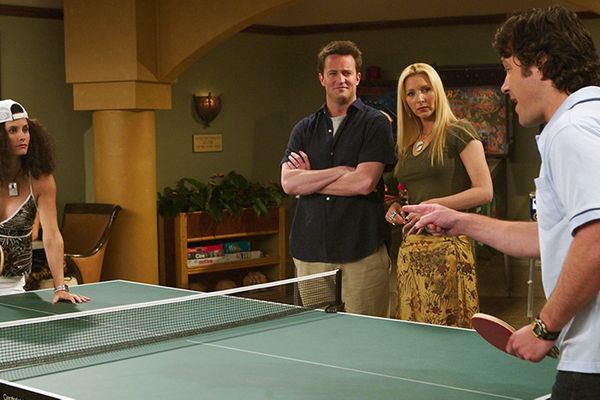 Friends Quiz: The One All About Season 9