Mila Kunis has always been stunning, but the new mom to baby Wyatt — who she and Ashton Kutcher welcomed in October 2104 — was rocking the red carpet on Tuesday June, 23.

Kunis stepped out for a Gemfields event in London in a white sheath, blazer styled dress, with a high slit and plunging neckline, that showed off her killer curves.

Matched with white pumps and side-swept hair, she reminded us all why she is one of the most desired actresses in Hollywood.

Since having baby Wyatt in the fall, she has been more than happy to stay out of the spotlight in order to be there for her daughter, only stepping out for some premieres and special occasions, including this one; she’s a spokeswoman for Gemfields jewelers.

Just last month, in a Q & A on reddit Kunis stated, “I’m proud to be a stay at home mom. I want an ecofriendly car, I want to compost everything, because I want the world to be better for her.”

Similarly, Kutcher has also been spending a lot of time at home with his family. Shortly after Wyatt’s birth, he stated that he and Kunis wanted to make sure they didn’t have to get a nanny. “We just want to know our kid. We want to be the people that know what to do when the baby’s crying to make the baby not cry anymore. We want to know, like, when she makes a little face or something, we want to be emotionally in touch with her. And I think the only way to do that is by being the one who’s there.” 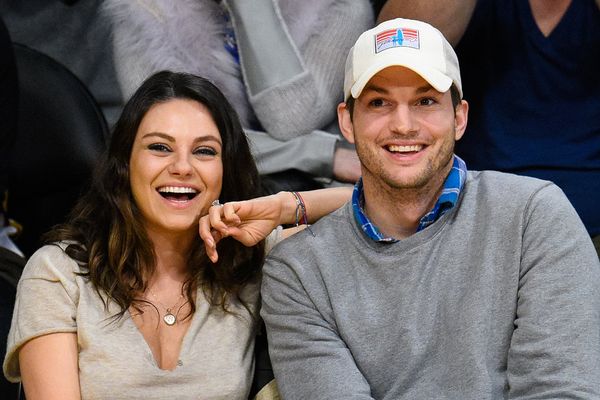