“A very long time ago, on this very day, this handsome man was born,” the 42-year-old actress wrote on Instagram, sharing a throwback photo of a teenaged Prinze Jr. showing off his toned abs.

“I am extremely happy about that (although I doubt he’s happy that I still have this high school picture) happy birthday @realfreddieprinze#happybirthday,” she added.

Gellar also shared a black-and-white selfie of her and her “handsome” husband via Instagram Story with the caption “Happy Birthday” and her the actor’s Instagram handle.

The couple married on September 1, 2002, after meeting on the set for the 1997 thriller I Know What You Did Last Summer. Gellar and Prinze Jr. began dating in 2000 and will celebrate their 18th wedding anniversary this coming September.

Recently, the pair opened up about what nearly two decades of marriage have taught them.

“We appreciate the perspective from the outside, but when you’re in a relationship, you just try to be in the moment. We don’t analyze it,” Prinze Jr. told PEOPLE.

“It’s our marriage and we just try to stay in the moment,” he added.

They also revealed that to make sure that they both stay in the moment, the couple makes an effort to unplug from their phones when together.

“We have a no phone rule at the dinner table,” Gellar said. “It’s about making sure that eye contact is made and that conversations are had.”

The couple shares 10-year old daughter Charlotte Grace and 7-year-old son Rocky James, and haven’t allowed their children to have phones of their own yet. “Our kids don’t have phones — that’s a grownup rule,” Gellar said.

Gellar and Prinze Jr. also shared what they’ve learned when it comes to tag-teaming meals and cooking for their family.

“I love to cook, I’ve cooked since I was a kid,” Prinze Jr. said. “I cook more, she bakes more. She does more desserts and breakfasts, I do more lunches and dinners.”

His wife revealed that they let themselves indulge on weekends. “We don’t do dessert every night of the week. We ration that for the weekend,” Gellar said.

A very long time ago, on this very day, this handsome man was born. I am extremely happy about that (although I doubt he’s happy that I still have this high school picture) happy birthday @realfreddieprinze #happybirthday 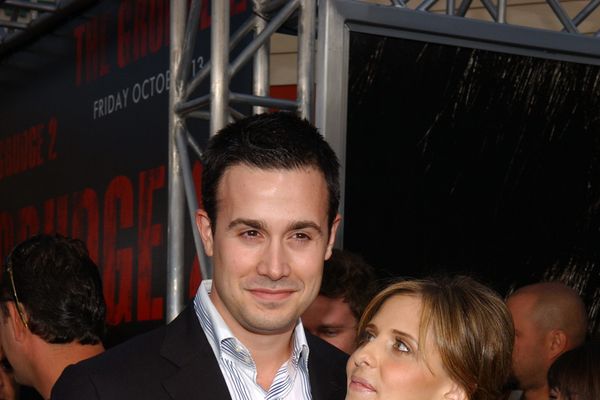