There won’t be any dull moments this week on The Young and the Restless, Days of Our Lives, General Hospital and The Bold and the Beautiful! Find out what will happen with our spoilers for June 22, 2020:

Monday on Y&R, Traci will be rescued by Danny (Michael Damian) and Cricket; Nikki’s plan to reunite Victor and his estranged mother, Cora (Dorothy McGuire), will backfire; and Lauren will face off against Gina Roma (Patti Weaver). The episode originally aired on June 27, 1984.

Rafe will attempt to strike a deal with Rolf on Monday’s episode of DOOL while Chad and Gabi will get into a heated exchange. Also, Jake will get hot and heavy with Gwen, and Claire will apologize to Hope for hurting Ciara.

GH’s Monday episode aired on December 3, 2003. Jason Morgan and Sam McCall will meet when they are both arrested for aiding and abetting suspected crime boss Sonny Corinthos.

Liam will discover his father is none other than publishing czar Bill Spencer Jr (Don Diamont), and he will not thrilled by it the news. Hope (Kim Matula) and Katie will try to referee between the two. Stephanie and Ridge will be ecstatic to learn Thorne (Winsor Harmon) is not Liam’s father. The episode originally aired on September 1, 2010.

Calling all Days of Our Lives (DOOL) fans! Wonder what’s on tap for the coming week? There will be some wedding drama. As well, a couple won’t be able to keep their hands off each other, and another character will have her day in court! Learn about these storylines and others in the DOOL spoilers for the week of June 22, 2020.

This coming week will focus on Gabi’s trial and her alleged drugging of Abigail DiMera! According to DOOL spoilers, Rafe will try and strike a deal of sorts with Dr. Rolf. Could his testimony help Hernandez? Regardless, by Friday, Gabi will learn her fate and whether or not she’s headed to prison (again). But, not before a little bit of drama unfolds.

Before she hears the verdict, Chad will roll back into town when actor Billy Flynn reprises his DOOL role. Abigail won’t be with him, but he’ll come back to Salem to ensure that Hernandez fries for what she has done to Abby. Early on in the week, expect Gabi and Chad to have a heated confrontation.

While it’s hard to say at this point whether or not these former lovebirds even really want to see each other, DOOL spoilers suggest that the two will cozy up, early next week. In fact, teasers imply they’ll get a little “hot and heavy,” so expect some steamy scenes between the exes this coming Monday.

Claire will be filled with some ups and downs the week of June 22nd. First off, DOOL spoilers hint that she’ll take the time to apologize to Hope around what she did to Ciara. As the days go by, Ben will worry about the fact that Ciara has chosen Claire to be her maid of honor, so sometime between now and next week, it’ll be confirmed.

5. Allie And Her Baby

There will be a lot of things going on with Allie, and it seems her baby will be at the center of the drama. First off, Lucas and Nicole will argue over her, and this might likely have to do with her expecting. Speaking of, seems as if Horton may come to the realization around what kind of future she wants her child to have.

4. WilSon In The Mix

As per DOOL spoilers, Allie will have an epiphany after a chat with Sonny and Will. In fact, she’ll approach Eric and Nicole to inform them that she has plans on giving her child to someone in Salem. Could WilSon be the parents she’s thinking of? Will she share her idea with them? In other related spoilers, Sonny and Will talk to Lucas about their plan, and Allie will have a heartwarming reunion with Rafe.

DOOL spoilers reveal that Brady will get confronted this week regarding his intentions. The person who approaches him? None other than his grandfather Victor! In other related teasers, Eli places a wedge in some plans that Victor and Brady come up with. Could Eli’s interruption have to do with his wedding or police business? Meanwhile, early on in the week, Sarah will confess something to Xander, and as the days go by, she’ll get angered by something he does to surprise her.

Across town, Eli and Lani will be busy with the final preparations around their wedding, which will take place on Friday. First off, someone mysterious will spy on Lani. It’s hard to say if she notices this or not; however, the evening before she is set to say, “I do,” Lani will approach her hubby-to-be with a new concern.

Interestingly enough, DOOL spoilers suggest that Lani will also get a visit from someone unexpected on the morning of her wedding day. Meanwhile, Rafe and Eli share a nice moment as the two men get geared up for the big day. In other Days teasers, Steve and Kayla will share a heart-to-heart conversation at some point this week. 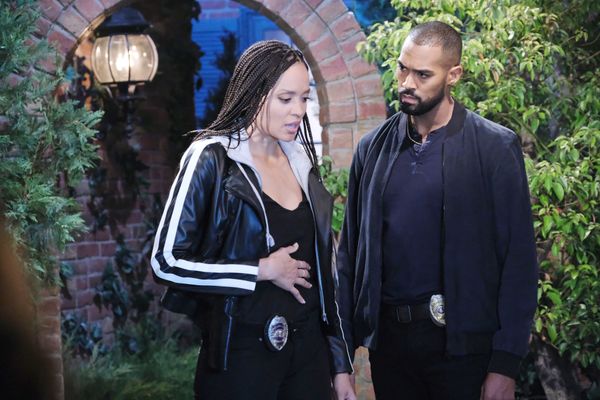