Who Does JoJo Fletcher Pick In The End: Bachelorette 2016 Finale Spoilers

Monday night means it is time for The Bachelorette, so grab your wine and settle in, because things are really getting good!

Tonight’s episode will see the remaining eight men and JoJo Fletcher in Buenos Aires, Argentina, after which JoJo will narrow it down even more, leaving only six contestants. As the season gets closer and closer to the final four, and final rose ceremony, it is harder and harder for fans to determine who JoJo will (or should) pick! From the beginning her front-runner has been Jordan Rodgers, but surely she can’t pick him after last week’s confrontation about his cheating history…or can she?

For those who can’t wait, trusty spoiler king Reality Steve has all the information needed for this season, right down to the final rose ceremony, and while he isn’t always right, he is correct very often. So, let’s get to it.

Who Does JoJo Fletcher Pick In The End?

At the end of this season, according to Reality Steve, it all comes down to Robby Hayes and Jordan Rodgers, and even with all of the rumors, JoJo goes with her gut and chooses Jordan. It may be even more surprising to learn that Jordan does propose and they are engaged! What will be most interesting however will be after the finale airs and see how long JoJo and Jordan stay together, because rumors are already swirling he is just in it for the media attention and the break-up won’t come long after all the press and whirlwind interviews die down.

Get the full rundown of her final four and winner here! 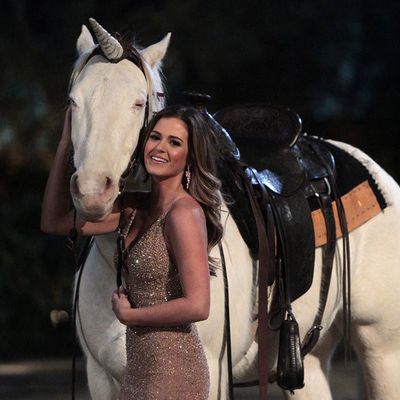