Who Wins The Bachelorette 2018: Who Does Becca Choose In The End?

Grab your wine and snacks and get ready, The Bachelorette fans because the end of Becca Kufrin’s season is on the horizon!

Every season, passionate Bachelorette fans tune in week after week to get to the most interesting episodes: hometown dates, overnight dates, men tell all, and of course, the finale! Now that we are closer than ever to the finale, some fans just can’t wait any longer, and luckily for them, Reality Steve has once again provided all of this season’s spoilers right down to the finale and winner — and so far he has been spot on!

After saying goodbye to everyone’s favorite golden boy Colton Underwood last week, this week will take Becca and her three finalists, Jason, Garrett, and Blake to Thailand for the overnight dates! While Reality Steve can’t divulge what actually happens on these dates, he does know one thing for certain: in the end Becca eliminates Jason, revealing her final two to be Blake and Garrett!

Although the finale is close, fans will first have to get through the Men Tell All episode which is sure to be full of bombshells, revelations, and drama and will be airing on July 30th.

On August 6th, the finale will go down and while many love Blake, it shouldn’t be surprising to learn that Becca chooses Garrett, and they become engaged, leaving Blake heartbroken! 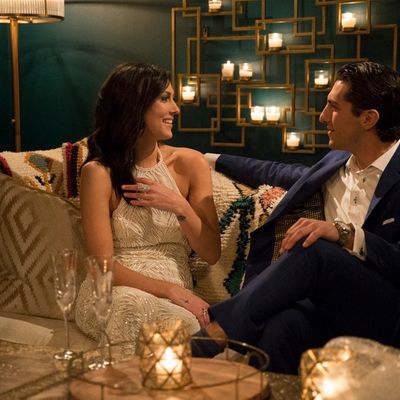