How much chaos will Sheila cause for Steffy and Finn? Will Paris get involved? What about the new levels that Quinn, Carter and Eric have reached in their respective relationships? As the temperatures cool down over the coming weeks, the drama will heat up on Bold and the Beautiful (B&B)! So, what happens next? It’s hard not to speculate. As such, below are some B&B plotline predictions for fall 2021.

13. Sheila Continues To Cause Drama For Steffy and Finn

It doesn’t take a rocket scientist to see that Sheila will cause more chaos for Steffy and Finn as the fall months proceed. Steffy will work overtime to show Finn what his bio mom is truly about, and Finn will consistently feel torn. This will ultimately push Finn closer to Paris, and further from Steffy. That’s already happening.

What if Hayes suffers from an illness where he needs a blood transfusion or something of that sort? What if Sheila is the only person who can help? Will Steffy allow a piece of Sheila to forever be a part of Hayes? What if it is something that could save his life? Steffy questioning whether or not to accept this would cause Finn to see his wife in a new light.

B&B fans on the Internet have been buzzing on this one. Sheila will continue to blackmail Jack about their little “secret” in the weeks and months ahead. What if someone else from Sheila’s past is Finn’s dad? Could this secret be revealed sometime in the fall? Some viewers of the soap have been chirping on social media that Deacon Sharpe could be Finn’s bio dad. What if this unfolds?

As if Sheila isn’t enough, Paris and Finn will continue to bond over the fall months ahead. They are bound to cross a line at some point. There’s a good chance that Sheila will make up a lie about Steffy, which could send a distraught Finn straight into the arms of Paris. Could she tell him she caught his wife with someone else? Could Paris and Finn have a “drink or two” as they commiserate over their romantic woes and get caught up in emotions?

If Paris and Finn wind up in bed sometime in late September or early October, could she find out she’s expecting? Would she turn to Finn, or possibly tell Sheila? Mrs. Carter wouldn’t only revel in the fact that Finn cheated on Steffy, but she’d love the idea of being a grandmother to another innocent being she could manipulate.

8. The Protection Of A Parent

B&B spoilers imply that Ridge and Brooke will remain committed to protecting Finn and Steffy. Could they cross a line when it comes to Sheila? The only way to protect this couple is to try and get rid of Ms. Carter. Will Brooke and Ridge do the unthinkable? Could they try to organize an “accident”? Sheila’s been a thorn in everyone’s side for too long. They may get desperate.

This storyline is a bit over-the-top at this point and has gotten very complicated since Eric gave the “okay” for Carter to sleep with Quinn. On the one hand, it is hard to believe. However, on the other hand, it’s something fans haven’t seen in a soap opera storyline… well, ever! Is this a temporary thing? What if Eric gets his groove back? What then?

B&B spoilers imply that Brooke will get involved in this storyline at some point in the fall. Could she help her ex fix this situation? What if she sends him to a specialist? Some medications and therapies can help, although other lifestyle factors might also help him get over this current condition.

If Eric gets better, he may decide to “release” Carter of his duties in the bedroom. But can Quinn turn off her emotions that easily? Fans know she loves Carter, and by Eric giving the “thumbs up”, she and Carter could get that much closer as time wears on. Will Quinn have to make a decision at some point?

4. Eric Has An Affair

What if Eric decides to get better for the sake of his marriage? He may wallow in self-pity for a bit, but then decide to secretly surprise Quinn. He could “work” on his condition or go on treatments. He may be “ready” to create a romantic night for his wife. If he stumbles in on Quinn with Carter revealing true feelings for each other, he may realize there’s love there and feel dumb for what he’s done. He could retreat and jump into bed with someone else. Maybe share a night with Donna?

It does seem farfetched, especially considering her age, but other characters in soaps have wound up expecting babies far later in life than the norm. What if Eric gets better and Quinn decides to “choose” him, casting Carter aside? What if she ends up expecting Carter’s baby? This would certainly complicate things!

B&B spoilers for fall indicate that Liam and Hope will deal with some challenges of their own. Haven’t they been through enough as it is? Added teasers note that a mystery person will enter their world and create some drama. Could this mean an ex of Liam returns? Could he have a child he’s unaware of?

Bill and Katie will have an interesting fall as they try to bring their family together. Katie has affected Bill like no other love he’s had in the past. He doesn’t want to give up on her and their family. Both will work hard to make things right. However, will they be able to succeed this time around? They don’t have a good track record! 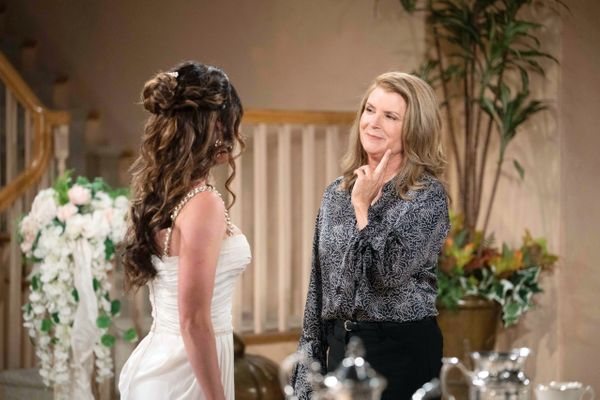 We Weigh In: Why Has B&B’s Sheila Carter Returned?