Bold And The Beautiful Plotline Predictions For The Next Two Weeks (December 6 – 17, 2021)

As Brooke continues to defend her daughter (and entertain Deacon’s advances), Ridge will find some much-needed peace when Taylor returns. Also coming up on The Bold and the Beautiful (B&B), Liam will waffle on whether moving out of the cabin is a good idea, while Sheila sees an opportunity amid Deacon’s cockiness. Let’s speculate on the latest spoilers with B&B plotline predictions for December 6th to 17th, 2021.

Ridge is already frustrated that Brooke doesn’t see Deacon causing any harm to herself or her daughter. Yet by demanding that Hope either cut off communication with Deacon or move out of the cabin, Ridge is the one causing harm… and Brooke will defend her daughter! Increasingly, it’s beginning to look like Brooke will have to choose between her husband and daughter — and we all know she’ll pick the latter!

Liam made a solid case to Hope that their young family could be just as happy – if not happier – without living amid the constant tension of Ridge and Deacon. But are Liam and Ridge’s goals about to diverge? After all, a change of address won’t suddenly make Liam content with Deacon stopping by for visits with his wife and kids, will it? It certainly won’t make Steffy any happier!

Liam is about to have one of his classic changes of heart. When he visits with his dad for advice, as B&B spoilers suggest, Liam will get an earful about not letting Deacon come within a mile of his family. If Bill can convince his son to break the law, which viewers saw happen this past spring, he’ll have no problem convincing Liam to protect his family — whether it aligns with Hope’s goals or not.

The whole subject of Hope and Liam moving out might be moot, if Brooke gets her way. “My daughter is not moving out!” she shouted at Ridge after learning that Hope and Liam were willing to leave the estate. Now that Hope is ready to take up Ridge on his ultimatum, Brooke will be furious with her husband for putting such an idea into her daughter’s head. And Deacon is ready to capitalize on her anger.

8. Deacon Wants It All

Having eavesdropped on some of this conversation, Deacon is gaining confidence in his ability to have a place in his daughter’s life. But is he also becoming greedy? His humble desire to be in Hope’s orbit has suddenly expanded to winning Brooke back and driving Ridge crazy. Deacon’s cockiness could be his undoing, especially now that Sheila is being dismissed by her erstwhile roommate.

Sheila has made a few romantic overtures toward Deacon, but he’s wise enough to realize that intimacy is a means of control for Ms. Carter. When her latest flirtation received a firm rejection, Sheila realized she’ll never control Sharpe. “I’m saving myself,” he said, with Brooke in mind. Sheila, already annoyed by the level of attention Logan receives from men, will be even more spiteful to learn that her rival has more control over Deacon than she can muster.

Deacon has made it clear that Sheila’s hotel room is just a place to recharge and grab a bite, so she’ll look to teach Mr. Sharpe a lesson in scheming. But first, she’ll look to prove that she can cover just as much ground with Finn as Deacon has covered with Hope. Sheila will visit her son at the hospital and tell him that she convinced Jack to confess his paternity.

Will Sheila’s admission sway Finn at all? It likely will, although that move alone won’t change the way Finn’s confidantes (Steffy and Hope) feel about her. That’s where Sheila’s lesson in scheming might come into play: if Ms. Carter decides to spill the tea on Deacon’s plan to win back Brooke, his true colors will be visible. But how will Sheila gather enough evidence for anyone to believe her? And who will she tell?

Sheila knows how to bait Deacon into telling her everything, even when he’s worried about jinxing his progress. Could she use the “home court advantage” of her hotel room to record Deacon gloating about his odds of coming between Ridge and Brooke? If she were to show this evidence to Ridge (or conveniently leave it for Justin), the Forrester’s blood pressure would go through the roof!

Better yet, could Sheila eavesdrop on Deacon and Brooke to gather evidence that Brooke is aware of Deacon’s motivations to reunite their family? Brooke keeps telling her husband that Deacon is harmless, yet she knows that her ex wants her back. Since Sheila already despises Brooke, will she gather evidence of Brooke’s duplicitous nature and offer it to Ridge?

No matter how Sheila decides to take advantage of Deacon’s overconfidence, Ridge is a powder keg just waiting to go off. With actor Thorsten Kaye’s temporary leave on the horizon and Taylor Hayes back on the canvas this week, it seems inevitable that his presence in this conflict will soon come to an end. Why would Sheila not take an opportunity to blow up Ridge and Brooke’s marriage?

“All I want is peace,” Ridge explained to Brooke after she scolded him for giving Hope an ultimatum. “So do I,” Brooke responded. But viewers know otherwise – these two have been sticking their noses in other peoples’ business and stirring the pot for months! In the minds of many B&B fans, “Bridge” is about to get a dose of long-awaited karma! So when Taylor returns to LA on Friday, December 10th, and reunites the family, will Ridge sense a new opportunity for peace? 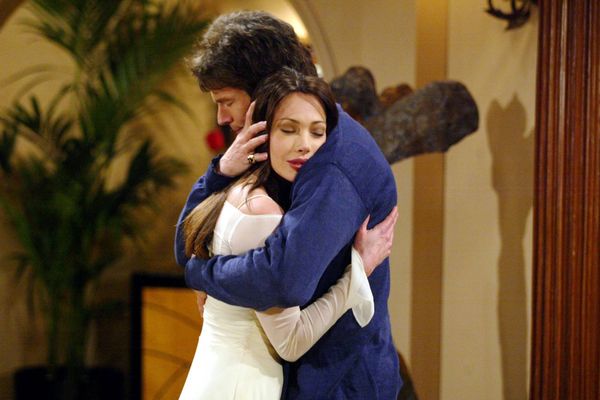