Bold And The Beautiful Plotline Predictions For The Next Two Weeks (October 11 – 22, 2021)

Finn will grow increasingly connected to Hope as she struggles to maintain a relationship with her dad. Speaking of Deacon, he’ll get caught up in Sheila’s web. Also, Steffy will risk relapsing while Eric is miraculously cured! Let’s look beyond the spoilers with The Bold And The Beautiful (B&B) plotline predictions for October 11th through 22nd, 2021.

Thomas will begin to woo Paris over the next two weeks. B&B spoilers indicate that Ms. Buckingham will receive an unexpected gift, and it’ll likely be from the Forrester. Zende will catch a glimpse of this gift over the coming days and be suspicious of his cousin’s intentions. But what will Paris think about getting cozy with her sister’s ex?

We already predicted that Hope and Finn would get much closer as autumn wore on, but now that Deacon Sharpe is back in the picture, the possibilities for these two become endless! Finn’s heart is already crying out for Hope on an empathetic level, as he wonders just how she’s coping with the very situation he’s struggling with. But as the next two weeks progress, Finn’s heart will feel more torn than ever.

After Steffy told Finn about Deacon’s release from prison, the conversation inevitably swung to Sheila Carter and the parallels of both situations. As Steffy defended her handling of Finn’s birth mother, Finn’s eyes glazed over. He’s committed to Steffy, but still deeply conflicted about how the choice to keep Sheila away from his family was forced upon him. Seeing Hope struggle with the same problem will make Finn increasingly distant from his wife.

10. The Love Triangle Of Doom Continues?

We talk about Finn and Hope’s bond as if it’s the only issue threatening both of these marriages, when really, the common ground between Steffy and Liam is a far more pressing concern. As Liam is now echoing Steffy’s position about Sheila but in regards to Deacon, could this love triangle between Hope, Steffy and Liam have yet another chapter ahead of it? It’ll be hinted at over the next two weeks, as Liam and Steffy commiserate on their similar frustrations.

Liam and Steffy aren’t just on the same page, they’re basically on the same sentence — and this will worry Hope. Might she confide this truth to her dad, when she’s trying to explain why his presence in her life might be too disruptive? Deacon might be disappointed but accept Hope’s rejection, while Sheila might recognize Steffy’s relationship with Liam as the wedge to break up her son’s marriage.

If Deacon can adequately play the doting father to Hope, he might just uncover other useful information regarding Steffy Forrester. Perhaps he’ll learn that Steffy was addicted to pain medication. If Sheila catches wind of Steffy’s past addition issues, she just might smuggle some ground-up painkillers into the cliff house living room and drug the Forrester’s coffee!

Sheila’s plan to get Steffy back into opiates might work faster than she thinks! There has been a lot of speculation around Steffy’s drinking thermos, and I can’t blame B&B viewers for questioning the contents of her beverage. A surprising quantity of shots featuring Steffy enjoying a drink from her thermos have made it into the final cut of episodes lately. Could she already be self-medicating with alcohol, or something else to ease her stress levels?

As previously predicted, Sheila and Deacon will team up in a bid to gain access to their estranged children, but it wasn’t diabolical love at first sight. In fact, Deacon made some solid points when he rejected Sheila’s planned allegiance a handful of times. However, Deacon’s not only broke and homeless, but he doesn’t look as far into the future as Sheila does. If he couldn’t look an hour into his future to realize he’d have to pay for all of the drinks he’d ingested, he’ll have no chance of withstanding this master manipulator!

Sheila will offer Deacon a couch to crash on, but will she eventually welcome him into the bedroom? These two had an interesting chemistry at the bar, trading barbs and playing it cool in front of each other. Those romantic undertones might be explored, but probably not within the next two weeks. The playful banter will continue between these two, even as their scheme begins to gather victims.

4. Deacon Gets A Job

Sheila doesn’t want a roommate, especially a flat-broke one! She wants to get Deacon a job, spiff him up a little, and give Hope no excuse not to give her dad another chance. She’ll ask a favor (or, in Sheila terms, blackmail) the assistant manager of the hotel she’s staying in to help Deacon score a job. If Hope can convince her family that Deacon is turning his life around, how will Finn not try to force the same issue with Steffy?

All of Ridge and Brooke’s wailing over the way Eric conducts his private life will leave an impression on the elder Forrester: that perhaps this open marriage thing isn’t for him. He has struggled throughout the whole experiment and will decide that enough is enough. He’ll demand that Quinn stand by his side and ditch Carter, or move out of the mansion.

2. Eric Will Have A Breakthrough

Shortly after this demand, Eric will have a breakthrough as far as his erectile dysfunction is concerned. Let’s just say it’ll be an uplifting moment and when it occurs, he won’t be thinking about his wife! Will this breakthrough happen while he’s reflecting on Katie’s kindnesses over the past while? It would reinforce that Eric’s whole problem was really a matter of trust: he couldn’t trust his wife, but he implicitly trusts Katie.

Meanwhile, Quinn will struggle to figure out where her heart belongs amid all of this drama. She confessed that she loves Carter, but is it more lust than love? Is she willing to lose all the perks of being Eric’s wife? Or will this be an opportunity to ditch his interfering family and explore a fresh start with Carter? She will be saying goodbye to someone over the coming days, and I’m thinking it might be Carter. But we’ll have to keep watching B&B to find out! 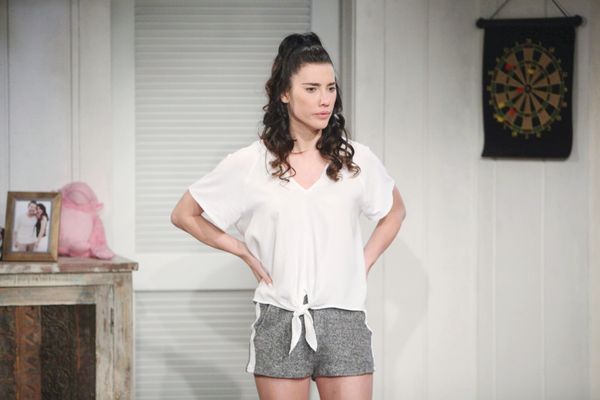