Bold And The Beautiful Plotline Predictions For The Next Two Weeks (September 27 – October 8, 2021)

Sheila is done using her words to get past “gatekeeper” Steffy, so things will get physical on The Bold and the Beautiful (B&B). Justin will weigh his options regarding how to deal with Eric’s polyamorous arrangement, and Katie might make a play in order to keep it secret! Also, what’s next for Quinn, Hope and Bill? Let’s look beyond the spoilers with B&B plotline predictions for September 27th through October 8th, 2021.

Fresh spoilers suggest that someone from Hope and Liam’s past will return to LA, and the B&B rumor mill has been speculating wildly on the identity of this person. Could this mark the return of Oliver Jones, or Ivy Forrester? Since there’s also a spoiler promising that Thomas is about to find a new love interest, we’re hoping these two narratives converge. Could a friend from Hope’s past catch Thomas’s eye, and could Hope find herself jealous?

Maybe it’s a good thing that Hope and Finn are about to become better friends, as it sounds like she’ll need someone to talk things out with. And we all know Finn is going to need someone, since spoilers tease that Paris will decide to move out of the cliff house. These two will find a lot of common ground as their personal lives get crazier over the coming weeks.

Steffy has drawn out the borders of her territory and Sheila has repeatedly encroached that domain. Now, it looks as though the ladies are done talking, and ready to take their turf war to the mat! After pleading with Steffy to see Hayes, Sheila was physically rebuffed by the Forrester on the episode for Monday, September 27th. And it’s about to get so much worse!

Sheila had humbled herself in front of Steffy, literally begging to see Hayes. “It doesn’t have to be ugly or complicated,” she said. “I’m not that person anymore.” But Sheila’s impassioned plea was laughed off. Spoilers indicate that Steffy and Sheila will get into a physical fight at the cliff house, forcing Finn to play referee between them. While this wrestle may not result in any serious injuries, the gloves are clearly off.

If Sheila gains anything from this encounter, it’ll be noticing her ability to unnerve Steffy. Since the restraining order barring Sheila from the Forrester family appears to be null and void, and the additional security around the cliff house is just a few pylons, Sheila might double-down on stalking Steffy. Will Ms. Carter cause the “gatekeeper” to have a nervous breakdown? If so, she could use an ally who knows Steffy’s routine… What’s Paris up to right now, anyway?

7. Quinn Will Regret Fessing Up

In further evidence that the LAPD has totally abandoned B&B, Quinn and Carter had to accept that Justin trespassed his way into the Forrester COO’s loft. It’s like the wild west! Quinn felt she had no alternative but to tell Justin about Eric’s arrangement, as she implored with Barber to keep Ridge in the dark. But is trusting Justin with this salacious information even worse than trusting Ridge with it? Eric might think so.

6. Justin Should Weigh His Options

Will Justin ignore Quinn’s pleas and tell Ridge all about Eric’s arrangement? If he’s looking to build trust with Ridge at all costs, then that’s the play. However, Justin’s recent bad-boy persona seemed to peel off as Quinn and Carter explained Eric’s impossible decision. Maybe Justin will decide to honor their secret… on certain conditions, of course!

Justin will have to decide between loyalty and opportunity. After all, holding Eric’s open marriage over the elder Forrester’s head could give Justin the upper hand over Ridge as well. He could blackmail Quinn and Carter now, and then blackmail Eric and Ridge later. However, none of this will get him closer to seeking revenge on Bill… if that’s still what he wants.

It’s hard to think of a better way to squeeze value out of Justin’s new intel on Eric than by taking it to Bill. First off, the details on Eric, Quinn and Carter’s polyamorous relationship could be weaponized to maximum effect in Bill’s hands. Also, it might restore some of Spencer’s faith in his former friend and legal eagle.

3. A Matter Of Trust

Speaking of Dollar Bill, will Katie feel any urge to share the news with her estranged hubby that Ridge and Justin are working together? Katie and Bill appear to be on the verge of reuniting, so she may feel that it’s in Bill’s best interest to know what Justin’s up to. On the other hand, Bill made everyone swear to never speak Justin’s name again, so maybe not…

Katie and Ridge acknowledged that Justin has a knack for uncovering any dirty secret, so Katie might try to mend fences between Spencer and Barber in an attempt to keep Eric’s secret safe. She could either prod Bill to buy the information and safe-keep it, as proof that he’s a changed man. Or she could approach Justin herself and try to sabotage Ridge’s investigation.

Katie could be getting smitten with Eric. She recently described him as “loyal”, “principled” and “the kindest man” — all qualities she clearly respects. As someone who has had no shortage of health issues herself, Katie might empathize with Eric’s bedroom issues and see a meaningful future between them. How would Donna process such a development? 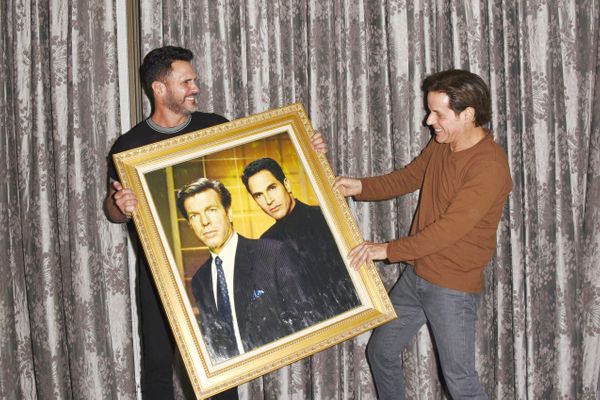