Bold And The Beautiful: Spoilers For January 2022

Hope will warn Taylor and Steffy not to interfere in Brooke and Ridge’s marriage and an argument will ensue, coming up this month on The Bold And The Beautiful (B&B). Also, Carter will be unnerved when Zende says he thinks Paris may be interested in another man. Plus, will Douglas tell Thomas what he saw on New Year’s Eve? Learn more below in the B&B spoilers for January 2022.

B&B spoilers tease that someone’s relative will unexpectedly arrive in Los Angeles. Rumor has it, Zende will arrange to bring someone special to town for Paris. But will it be her sister Zoe or her mother? As it has just been announced, Paris will reunite with her mom, Dr. Grace Buckingham. Perhaps Zende will hope her mother can be a positive influence on her and may even encourage Paris to think about settling down.

Zende will confide to Carter that he thinks Paris may be interested in someone else. He’ll also reveal the conversation he had with his girlfriend on New Year’s Eve and ask Carter for his advice. Of course, Carter will feel very uncomfortable, considering he’s the man Paris has become interested in. But what will he tell Zende?

A new female character will also hit the B&B canvas in January. Rumor has it she’ll be working at Forrester Creations. Many viewers are hoping the fresh, new face will also become a romantic interest for Thomas, who has been unlucky in love for years now and is long overdue for a healthy relationship.

Although Ridge will support Brooke’s quest to remain sober, she’ll be hiding a secret from him – she kissed Deacon on New Year’s Eve. So, it seems more than likely their marriage will show even more signs of crumbling as the month progresses. And once Ridge does find out what Brooke is keeping from him, all bets are off regarding how long “Bridge’s” marriage will last.

8. Brooke Deals With Her Problem

Brooke will continue to struggle with her alcohol problem throughout the month of January. She’ll admit to her daughter and her husband that she’s tempted to drink every day. She’ll begin to believe she needs help staying on the wagon and Ridge will offer to accompany her to an AA meeting.

Brooke will have several emotional conversations with her loved ones, including Ridge and Hope. It’s rumored Brooke will break down with her daughter, when Hope demands to know why Deacon is now banned from the property. But will she blame him for breaking her sobriety, or will she tell Hope the truth about what really happened on New Year’s Eve?

Liam will comfort Hope when she tells him it’s her fault Brooke broke her sobriety. She believes that making her mother relive her affair with Deacon and then insisting that he be a part of their lives was a big factor in Brooke falling off the wagon. Liam will tell Hope that Brooke is a grown woman who makes her own decisions, and she shouldn’t be blaming herself for her mother’s actions.

Sheila’s revenge plot against Brooke won’t end with switching champagne labels. She’ll continue to target her enemy throughout the month of January and make a promise to herself to destroy Brooke. However, what will Sheila do next? One thing’s for sure, her ire for Brooke will catch the attention of Taylor, when Sheila drops by her office again early in the month.

B&B spoilers tease that Steffy and Taylor will be worried about Ridge after he confides in them that Brooke fell off the wagon. They’ll try their best to support and encourage Ridge, but they’ll also be concerned about the effect Brooke’s problems are having on him. Taylor and Steffy will tell Ridge they’re on his side and that he can count on them no matter what.

3. Another Steffy And Hope Blowout

Hope will warn both Steffy and Taylor not to use Ridge and Brooke’s current problems to their advantage. She’ll tell them if they know what’s good for them, they had better not interfere in “Bridge’s” relationship. Taylor won’t say much but viewers know Steffy can give as good as she takes, and it’s expected she’ll blast her former rival.

2. Ridge And Taylor Get Closer

After their argument with Hope, Steffy will do her best to persuade Taylor to pursue Ridge. Her mother has already admitted she’s still in love with him, so Steffy will play on her emotions. And it won’t be all that difficult for Taylor to fight for Ridge, because he will continue to go running to her every time he has a problem with Brooke. Rumor has it, the exes will grow closer during the month.

When Douglas tells Thomas he looked through Brooke’s window and saw her kissing Ridge on New Year’s Eve, he’ll be puzzled. He knows his father was sitting on a grounded plane in New York that night. Thomas even spoke to his father on the phone just before the stroke of midnight. So, he will begin to wonder what Douglas really saw. But will Thomas put two and two together and realize Brooke was kissing another man? Stay tuned to B&B to find out! 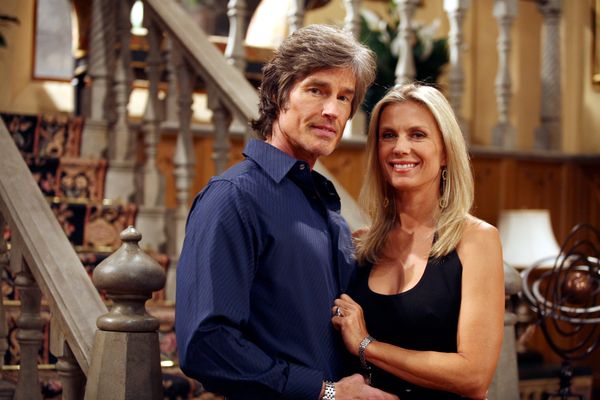