Bold And The Beautiful: Spoilers For Summer 2021

Thomas will find himself in danger when he learns the truth about what happened on the night of Vinny’s demise, coming up on the Bold And The Beautiful (B&B). Also, Steffy and Finn will be thrilled when Steffy gives birth to a healthy baby boy. Plus, after Carter and Quinn’s secret comes out, a despondent and heartbroken Zoe will leave LA. Learn more below in the B&B spoilers for summer 2021.

Steffy and Finn’s baby boy will arrive this summer and the couple will be thrilled. Kelly will also be happy to have a new sibling in her life, and a baby brother at that. The delivery will go smoothly, and mother and baby will be fine and healthy. But what will Sinn name their new son?

B&B spoilers tease that Finn will swiftly become the dominant father figure in Kelly’s life, with Liam locked away in a jail cell, possibly for years. Kelly will miss her daddy, but she’ll also be happy that Finn is around to help her mother and also have fun with. Steffy, too, will be grateful that Finn is in her daughter’s life and they’ll settle into being a happy, blended family.

B&B Executive Producer Bradley Bell has promised viewers they would soon learn about Finn’s background and his family. So far, we know nothing about the handsome doctor’s relations. We don’t even know if he’s really a good guy, or a bad guy in disguise! But this summer, fans should at least get some hints of who his mother might be. Rumor has it, Finn’s mom may already be on the canvas and could be Shauna, Quinn or Brooke. Or will a new character be brought in to play his mother?

With Steffy back in LA and she and Finn welcoming their new baby this summer, could wedding bells be far behind? Sinn fans have been patiently waiting for their favorite couple to get married since they got engaged back in March. Will viewers see a romantic, cliff house wedding in the next few months?

Will Wyatt and his fiancé Flo get a storyline this summer, or will they continue to be relegated to background players? It seems like all they ever do is comment on what everyone else is up to. If Shauna and Quinn can put all their drama aside for a while and concentrate on planning a lovely wedding, then perhaps Flo and Wyatt could at least make it down the aisle this summer.

Hope will continue to advocate for Liam while he’s in jail and she’ll keep pestering Justin to help her husband. Hope wants Liam released so he can be with her and their children. Surely, he’s not going to spend the whole summer languishing behind bars! And, irony of ironies, it could be Thomas who will end up being the person responsible for Liam’s freedom.

Thomas will be determined to get to the bottom of how Liam ended up hitting Vinny on that fateful night. He’ll wonder where his best friend was headed on the night he died. And whatever Thomas does uncover about Vinny’s demise, rumor has it he’ll end up in grave danger. But what will Thomas discover?

5. The Truth Comes Out

B&B spoilers tease the truth about Vinny’s untimely demise will finally be disclosed. But what is that truth? Fans have believed since the moment Liam hit Vinny that it seemed way too convenient. So, what really happened to the former lab technician? Our money is on the theory that Vinny was already badly beaten by the time he stumbled (or was pushed) onto the road. But who did it?

Other B&B spoilers point to a stunning twist in the murder mystery. There’s been some conjecture about suspects who aren’t even on Deputy Chief Baker’s radar including Wyatt, Justin and Finn. Even Thomas is considered a suspect. However, it seems impossible that Thomas had anything to do with it. After all, he was with his son Douglas that night. He’s also the person who will uncover a clue and may even solve the mystery of who really killed Vinny.

Now that Paris knows they had a fling, Carter and Quinn will struggle to keep it a secret from everyone else. They are well aware the only reason Paris hasn’t immediately told someone else is because she decided to protect her sister. However, they both know the secret could blow up in their faces at any time. But when and how?

Rumor has it, a heartbroken Zoe will leave LA for good. As most viewers know, actress Kiara Barnes is departing B&B in early July for a prime-time gig, so she’ll be exiting the canvas this summer. And it won’t be a happy departure for the Forrester model, as she’ll be devastated when she finds out her so-called friend Quinn betrayed her by sleeping with Carter.

Spoiler photos recently surfaced on social media that indicate Quinn and Carter’s secret will be revealed this summer, and in spectacular fashion. Eric and Quinn will decide to renew their vows in front of their friends and family. During the ceremony, ironically officiated by Quinn’s former lover, someone (hopefully Brooke) will stand up and accuse Carter and Quinn of having an affair. The looks on their faces will make it obvious to everyone that the accusation is true. Carter will end up alone when Zoe leaves town, but will he also lose his job at Forrester? And will Eric dump Quinn again when he finds out she cheated on him? Keep watching B&B to find out! 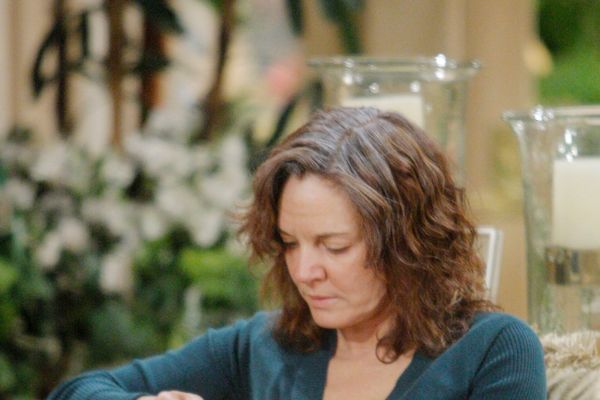