Quinn and Carter’s affair will be revealed during Queric’s vow renewal ceremony, coming up on The Bold And The Beautiful (B&B). Also, Thomas will be taken hostage by Justin, while Bill and Liam remain in prison. Plus, Steffy and Finn will be overjoyed when she gives birth to a healthy, baby boy. Learn more below in the B&B spoilers for June 21 to July 2, 2021.

12. Bill Gets A Visit From Katie

Katie will find herself overcome with emotion when she visits Bill in prison. She’ll tell Bill she’s worried about Will. Their son could grow up without his father in his life, because Bill foolishly covered up a hit-and-run. She hasn’t yet told Will where his father is but eventually she’ll have to. Katie will lash out at Bill for what’s happened.

11. Steffy And Hope Team Up

Spoilers tease that Hope will be afraid for her husband when he tells her he’s sure he’ll be locked up for years to come. So, she’ll team up with Steffy to cheer up Liam. They know he’s been down and can’t blame him for that as he’s facing a long jail term if he’s convicted in the hit-and-run. But they both want to let him know that he can’t give up on his future. After all, he’s got two little girls who both need him.

Steffy will go into labor and Sinn will happily welcome their beautiful and healthy baby boy. Both mother and baby will get through the water birth with flying colors. Finn will be thrilled to have a child with the woman he loves and Steffy will be excited to bring a sibling home for Kelly. Joy will abound in the Sinn household, at least for now.

With Liam and Bill sitting in prison cells, Justin will take over the reins at Spencer Publications, even though Bill recently told Wyatt he would be in charge. Wyatt will kick up a bit of a fuss at first, but Justin will lie and explain that Bill called him and changed his mind.

Liam and Bill will discuss Justin’s plan to help them get out of prison. They’ll be hopeful for the first time in weeks. However, neither of them will realize that Justin has no intention of springing them from the joint. In fact, he’s hoping they’ll both be sitting in a jail cell for many years to come.

Thomas will be stunned when he unblocks Vinny’s number and receives quite a few texts from his best friend. B&B casting news indicates viewers will also get to see Joe LoCicero (Vinny) in flashbacks. Of course, there will be several apology messages about tampering with Steffy’s paternity test and Thomas will feel bad. But there will also be other texts that will lead Thomas to believe he’s knows exactly what happened to Vinny the night he lost his life.

Believing he can free Liam and Bill from prison, Thomas will go straight to Justin with the evidence he’s uncovered from Vinny’s texts. But he won’t realize at first that he’s made a big mistake and gone to the wrong person. Spoilers indicate that Justin’s going to knock him over the head and drag him to the basement of Spencer Publications.

B&B spoilers tease that Thomas will wake up in a locked storage cage and it will dawn on him that Justin’s the one who put him there. He’ll ask Justin why he’s keeping him there and will make an appeal to the lawyer’s sense of decency. Justin will tell Thomas he has no pity for him. Then he’ll remind Thomas that the way his niece lost her life was in no way decent and he knows the designer had a hand in it.

A horrified Thomas will be stunned when Justin relays what he plans to do. He’ll explain to Thomas that he’s in charge at Spencer, thanks to Bill and Liam’s confessions, and he doesn’t plan on giving that up anytime soon. And if Thomas thinks he’s ever getting out of that cage, he can think again.

Wanting a fresh start with her husband, while at the same time panicking that Paris is going to blab, Quinn will ask Eric to renew their vows. He’ll agree to it, of course, and will tell Quinn they’ll have a huge celebration and invite all their friends and family. Eric will also tell her he wants Carter to preside over it and she’ll nervously agree. What could possibly go wrong?!

B&B spoilers tease that Paris will decide she needs to do the right thing. She’ll have been sitting on Quinn and Carter’s dirty little secret for days and will finally tell someone what she knows. Unfortunately for Quinn, the person Paris will confide in will be none other than Brooke. She will be stunned by the juicy information, but not surprised. Brooke has noticed that Carter and Quinn have been rather chummy lately, which raised her suspicions. Rumor has it, Brooke will ask Paris to keep the secret to herself for a little while and let her deal with Quinn.

They say revenge is a dish best served cold and Brooke will get a sweet serving of it when she busts Quinn for sleeping with Carter during Queric’s vow renewal ceremony. Viewers know Quinn did something similar to Brooke when she and Ridge held a reunion party last year. A video of Brooke and Bill kissing played on Ridge’s digital photo frame for all to see. So, it’ll be some satisfying payback for Brooke when she outs Carter and Quinn’s affair in front of everyone. But how are Eric and Zoe going to react? Keep watching B&B to find out! 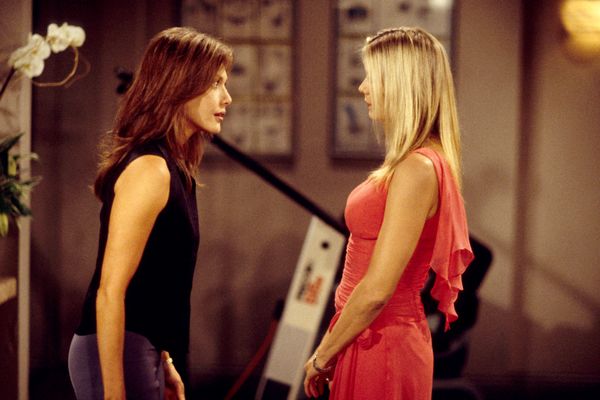