Flo may think she’s in a good spot when it comes to the Logans, but she’ll soon discover that not everyone has forgiven her, coming up on the Bold And The Beautiful (B&B). Also, Hope and Liam will separate, and Steffy and Finn will continue to revel in their love. Plus, Shauna and Quinn will play catch up. Learn more below in the B&B spoilers for March 22 to April 2, 2021.

Hope will once again go to her mother for advice about what to do when it comes to Liam. Brooke will suggest forgiveness, but why doesn’t practice what she preaches?  She recently looked down her nose at Thomas and even suggested he may have been in cahoots with Vinny when he changed the paternity test. However, when it comes to Liam, Brooke will be all about mercy and compassion. Will Hope listen to her mother’s advice and take pity on her husband?

Spoilers tease Hope is done with Liam, for now. After carefully watching his reaction to the news that Steffy’s unborn baby wasn’t his, Hope can’t take it anymore. Liam also admitted he declared his love to Steffy on the night he slept with her. But when he accused Hope of starting the ball rolling by forgiving Thomas and becoming friends with him, it was just too much for her to take. Hope will decide she needs space from her husband, and she’ll tell him she wants to separate.

Liam’s worse nightmare will come true when Hope kicks him to the curb. The Waffler has begged and pleaded with her a thousand times for another chance, but he’s not going to get it, at least not for the time being. This was Liam’s worst-case scenario and he’ll be completely thrown off kilter. Will he head to Steffy’s place to vent?

Rumor has it, Liam will turn to turn to Bill for his advice. He feels guilty for ruining his perfect little family with Hope and will vent his frustrations to his father. Bill will tell him the cold, hard truth – he’s made his bed and unfortunately now he has to lie in it. Although Bill will be a little harsh with his son, he’ll tell him he made his own mess with Katie and she’s finally forgiven him, so Liam shouldn’t give up on his marriage.

Spoilers tease Liam will lean on his brother after seeking Bill’s counsel regarding this difficult time in his life. He’ll tell Wyatt he knows he blew it, but he was hoping his wife could get past his infidelity. Wyatt will provide some guidance and a lot of comfort to his brother, but will he also invite him to move into the beach house?

Although they’re far from friends, Shauna will reach out to Brooke to thank her for forgiving her daughter. She’ll express her appreciation to Brooke and will also tell her she’s grateful for giving Flo a position at Forrester Creations. Bill should also be thanking Brooke – now Flo won’t be spending all her time hanging out at Spencer Publications, distracting Wyatt’s while he’s trying to work.

Shauna and Quinn will dish about all the goings on in their lives and in the lives of the Forresters, Spencers and Logans. Quinn will be thrilled when Shauna tells her Flo has been forgiven by the Logan sisters and even been given a job at Forrester Creations. The two besties will also discuss Quinn’s reconciliation with Eric. Rumor has it, viewers will see much more of Quinn and Shauna in the coming months.

Ridge was proud of his son for doing the right thing and pursuing Vinny about the paternity test. And rumor has it, Thomas will find another way to prove to his father that he can be trusted. It wasn’t all that long ago that Thomas was on the outs with everyone in his family, including his father. But he went the extra mile for Steffy and Hope. Thomas will continue to prove, especially to Ridge, that he can be counted on to do the right thing.

Steffy and Finn will continue to revel in their love. They’re engaged and having a baby together and the Forrester CEO and the doctor feel like they’re on top of the world. “It feels like this huge weight has been lifted off my shoulders,” Steffy told her fiancé on a recent B&B episode. “Now that I know I’m pregnant with your baby.” But how will everyone react when Sinn tells them they’re engaged?

3. Flo Gets Another Gift

Rumor has it, Flo will receive another gift this week. Viewers know a few weeks ago, she was gifted a job at Forrester Creations, courtesy of Ridge and the Logan sisters. Will they give her another promotion even though she just started working there? Or will this gift be more of the romantic variety?

Speaking of Flo, spoilers tease there’s another marriage proposal coming up. It’s rumored that Wyatt will get down on one knee and ask Flo to be his wife. Or will it be Bill who asks Katie for her hand in marriage again? Our money is on Wyatt proposing to Flo, but will he?

1. Not All Is Forgiven

Spoilers tease that not everything will be coming up roses for Flo in the next couple of weeks. Since her aunts have forgiven her for her part in the baby selling scheme that she participated in, Flo may think that she’s been resolved of all accountability. However, she’d be wrong. There’s one person who won’t be so quick to forgive her. Rumor has it, when Flo reaches out to her cousin, Hope will turn on her. But how will Flo react? Keep watching B&B to find out! 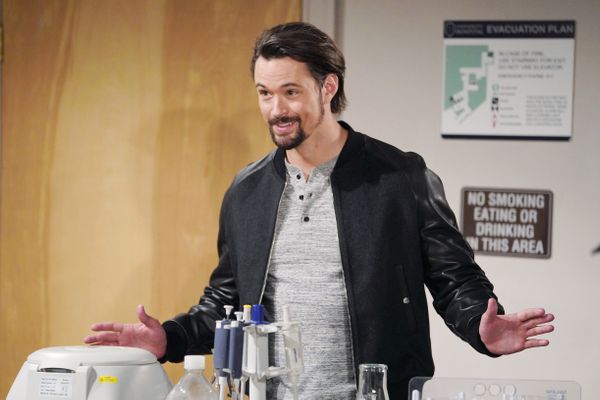