Sheila will fight to the bitter end when Deputy Chief Baker shows up at the cliff house to arrest her, coming on The Bold And The Beautiful (B&B). Although Eric will feel bad, he’ll continue to conceal his affair with Donna from his wife. Plus, the truth about what Sheila did to Brooke will finally be revealed. Learn more below in the B&B spoilers for May 9th to 20th, 2022.

Eric’s conscience will get the better of him when Quinn goes out of her way to be kind to him. He’ll feel guilty about betraying his wife with Donna, even though he’s happy when he’s with his former wife. But he’ll also try his best to conceal his affair from Quinn. Of course, Eric is good at hiding his cheating ways. He did it for years when he cheated on Stephanie with lots of other women. 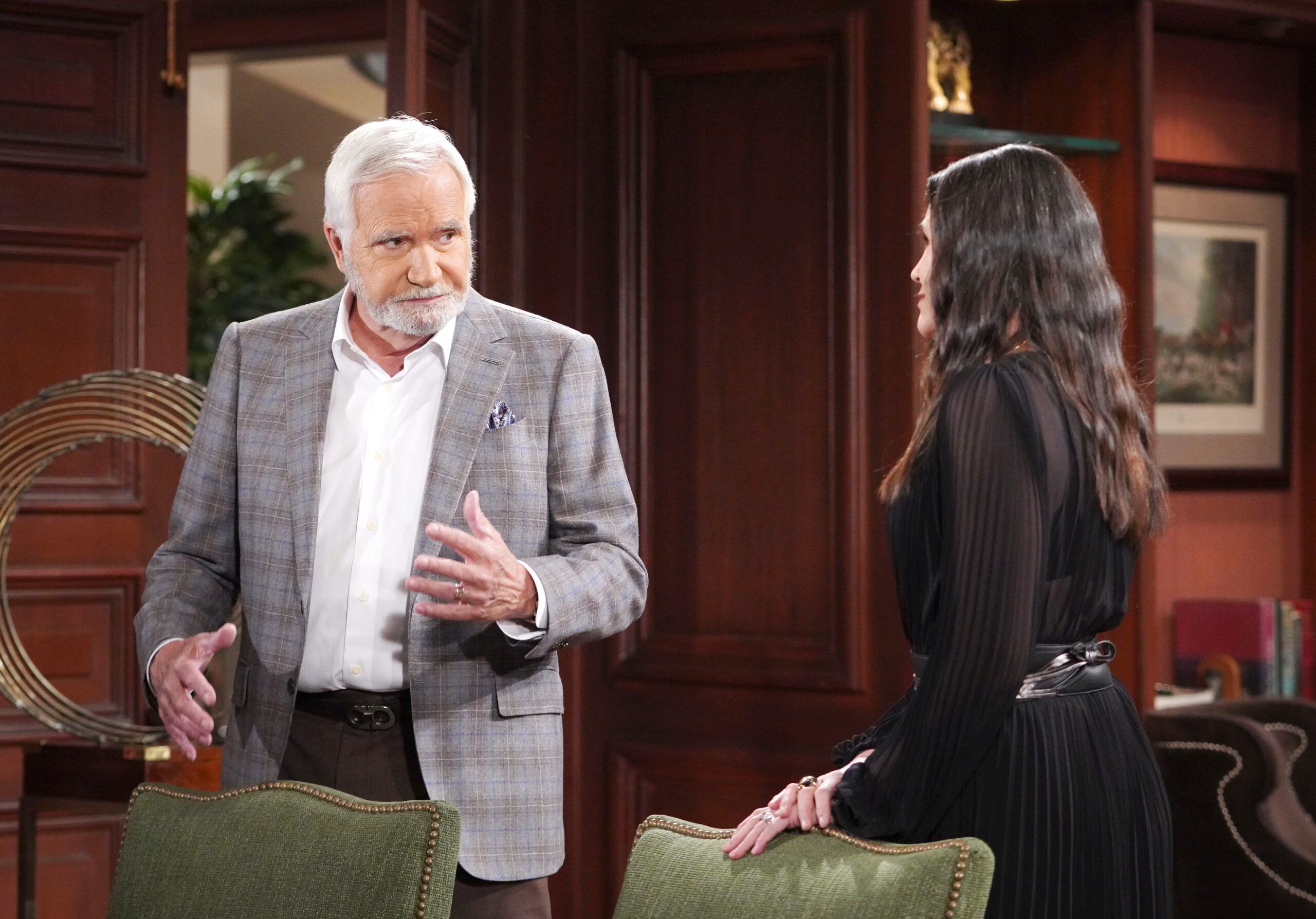 Carter will find himself in a bit of a pickle after Paris asks him if he’s still hung up on Quinn. He’ll stammer and attempt to answer her question but in the end he won’t need to. Because Quinn will choose that moment to enter the office and save him from the uncomfortable situation. 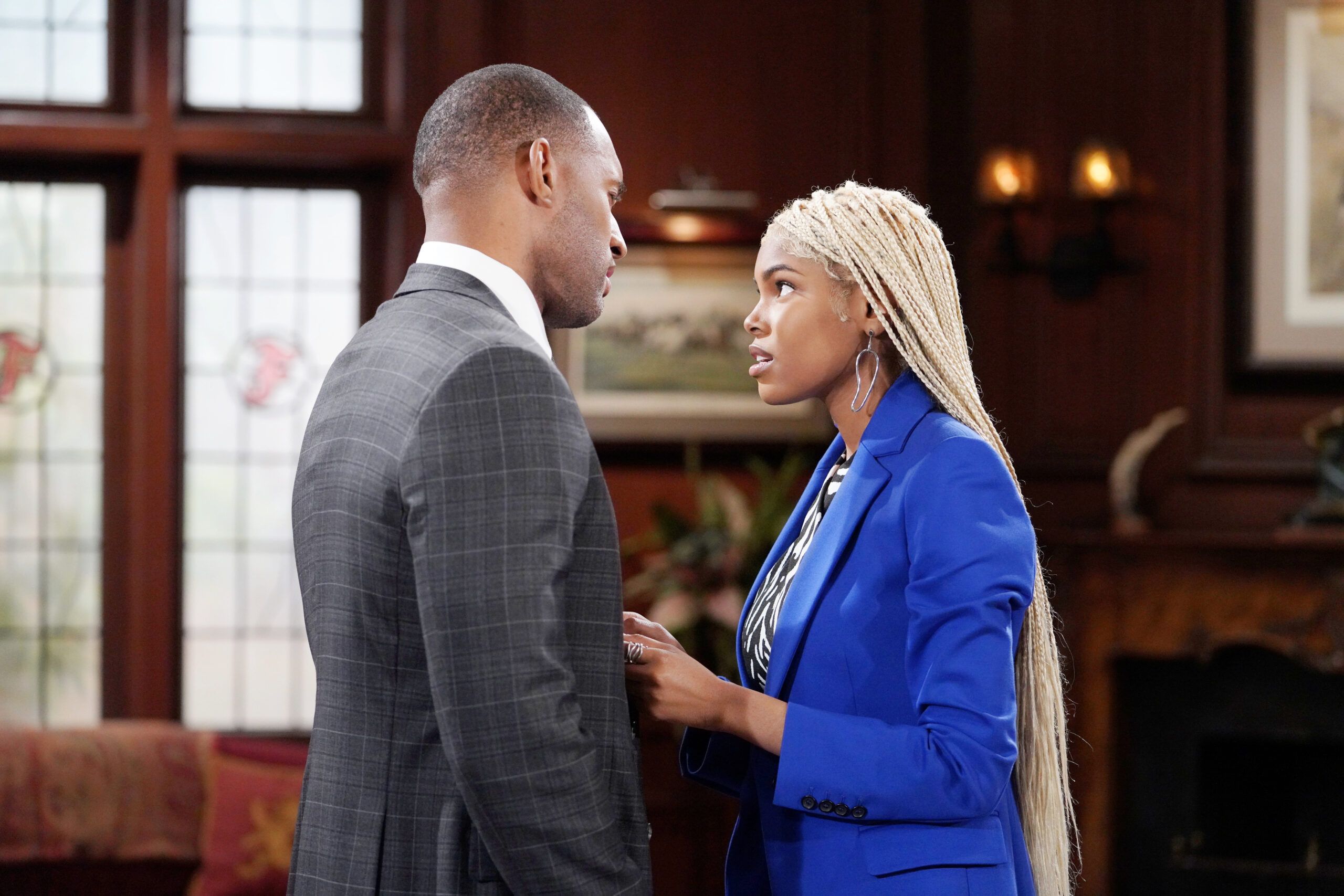 Deacon will tell Hope and Brooke that Sheila feels as though there’s nothing left for her in L.A., and she’s decided to leave town. Brooke will say she’s beyond thrilled. Even though she’ll admit it’s sad that Sheila lost Finn, Brooke believes that no one else wants her around, especially Steffy. 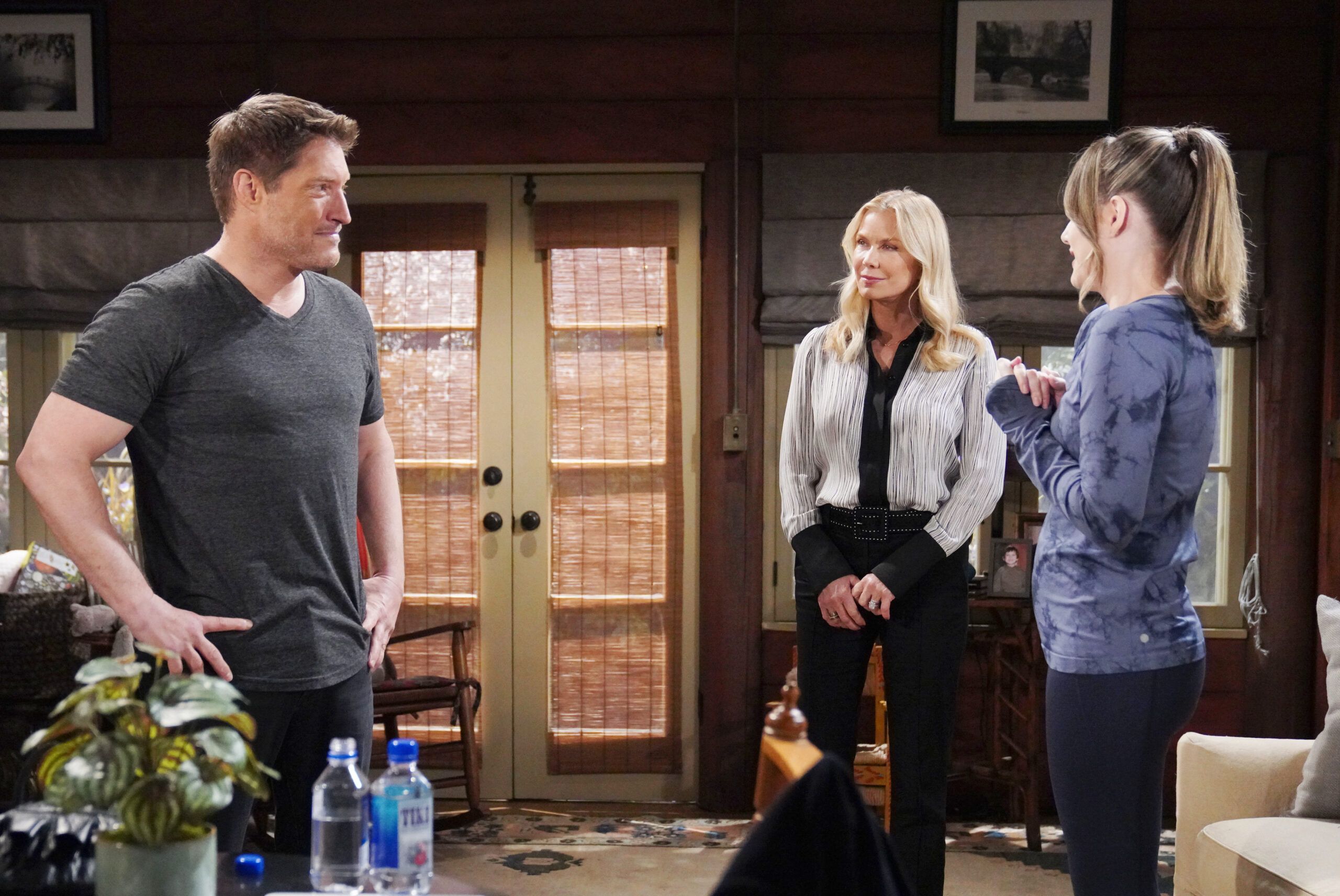 After Sheila finally leaves the cliff house, Steffy’s memories of the shooting will begin to return. Taylor had advised her that something would likely trigger her and seeing Sheila in her home did just that. Steffy will recall her fierce argument with Sheila in the alleyway and it’ll all start coming back to her.

As Steffy’s memories of the fatal shooting begin to flood in, she’ll recall when Finn leapt into action. She had no idea her husband was even in the area, but he was suddenly standing right in front of her as Sheila held a gun and pulled the trigger. And she’ll be flabbergasted that Sheila shot her own son. 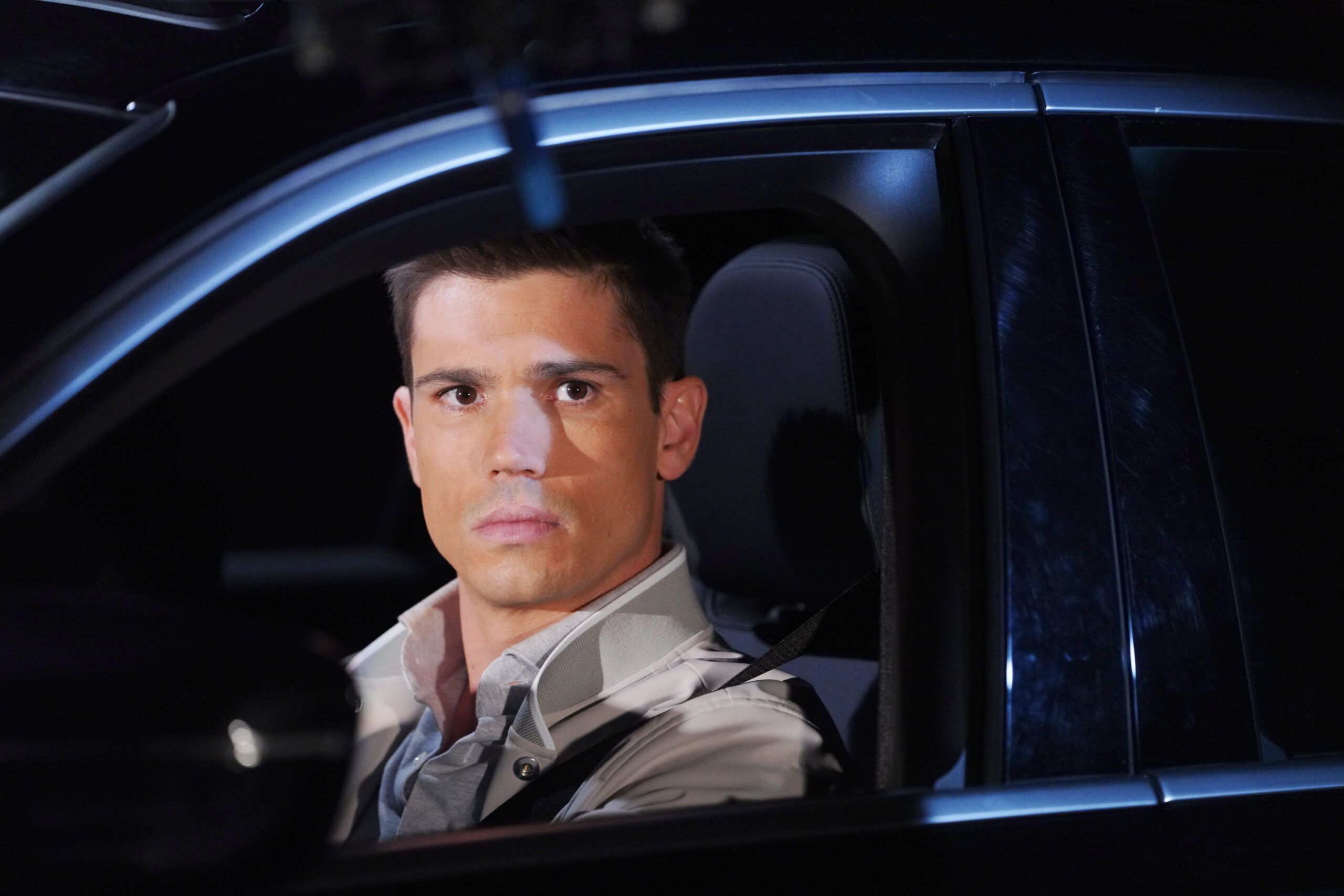 B&B spoilers tease that Steffy will share her disquieting memories with Ridge and Taylor. They’ll want to call the police right away, but Steffy will disagree. She wants to be the one to take Sheila down, once and for all. So, she’ll call Sheila and feign friendship; plus she’ll tell her she can see Hayes. Taylor and Ridge will agree to their daughter’s scheme, as Sheila will jump at the chance to visit her grandson. 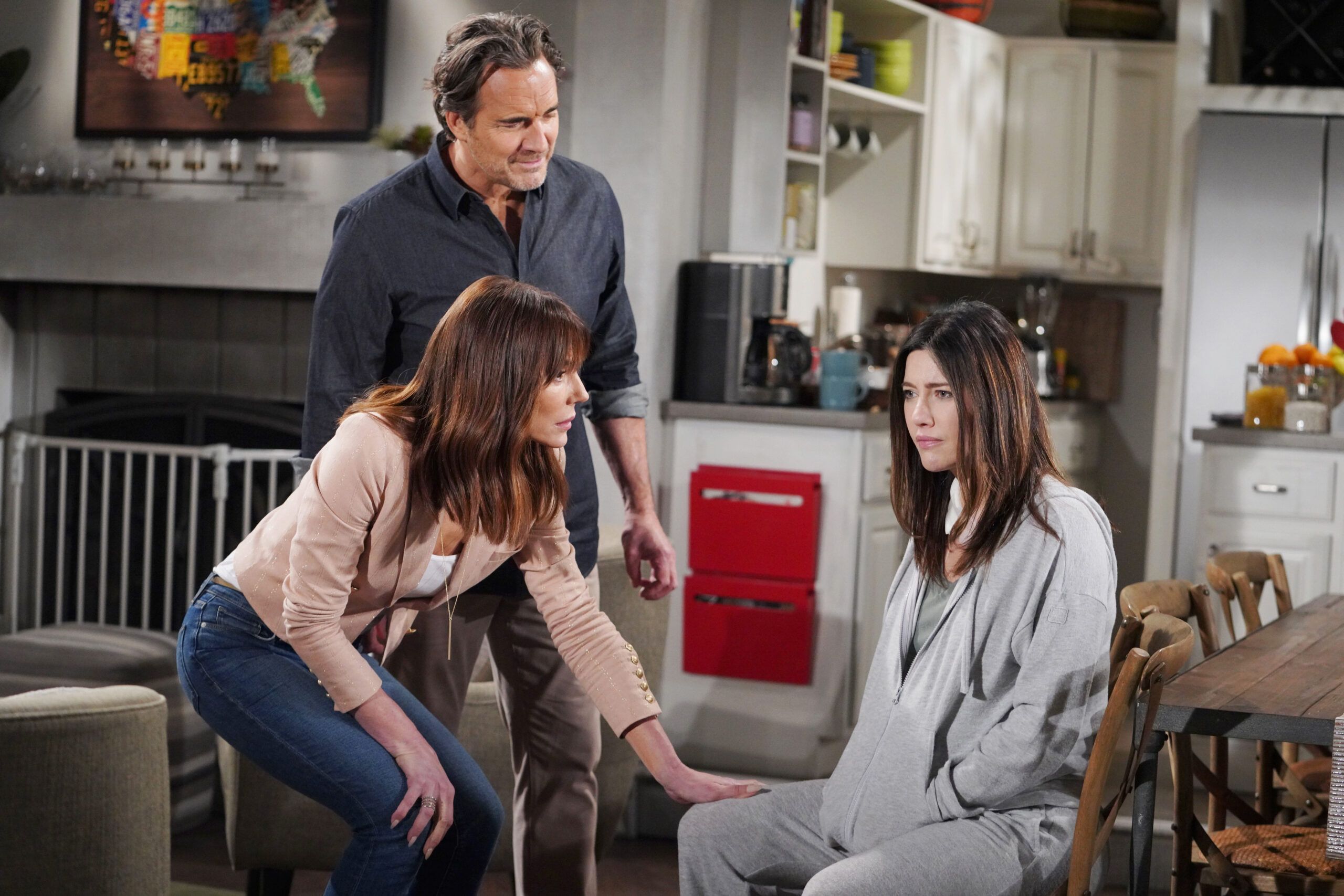 Sheila won’t know what hit her when she heads back to the cliff house. She’ll believe she’s finally going to get what she wanted: a relationship with her grandson. Unfortunately for her, she’ll be sadly mistaken. Because the moment she steps through the door, Steffy, Taylor and Ridge will ambush her. 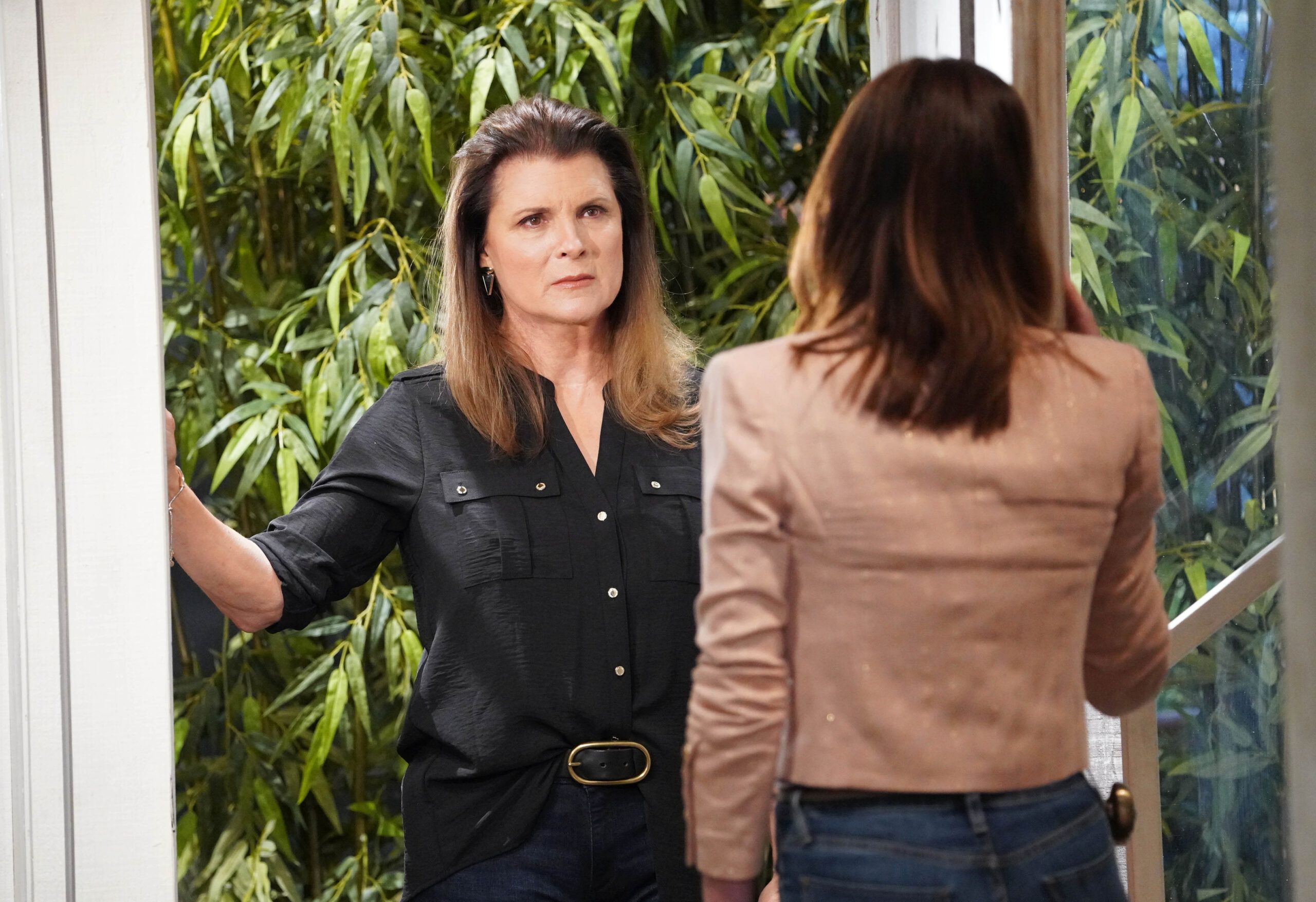 5. Steffy Recalls Why She Confronted Sheila

Not only will Steffy tell Sheila she remembers the criminal killed Finn, but she’ll also suddenly recall the reason they were arguing. Sheila pulled a switcheroo on Brooke’s champagne labels on New Year’s Eve, causing Brooke to fall off the wagon. So, how will Ridge feel when he hears this?

Rumor has it, Sheila will fight to the bitter end when Deputy Chief Baker walks into the cliff house. He’ll be holding a pair of handcuffs and will tell Sheila she’s under arrest. But this is Sheila we’re talking about here. So, she’s definitely not going to go quietly, and she’ll resist arrest. 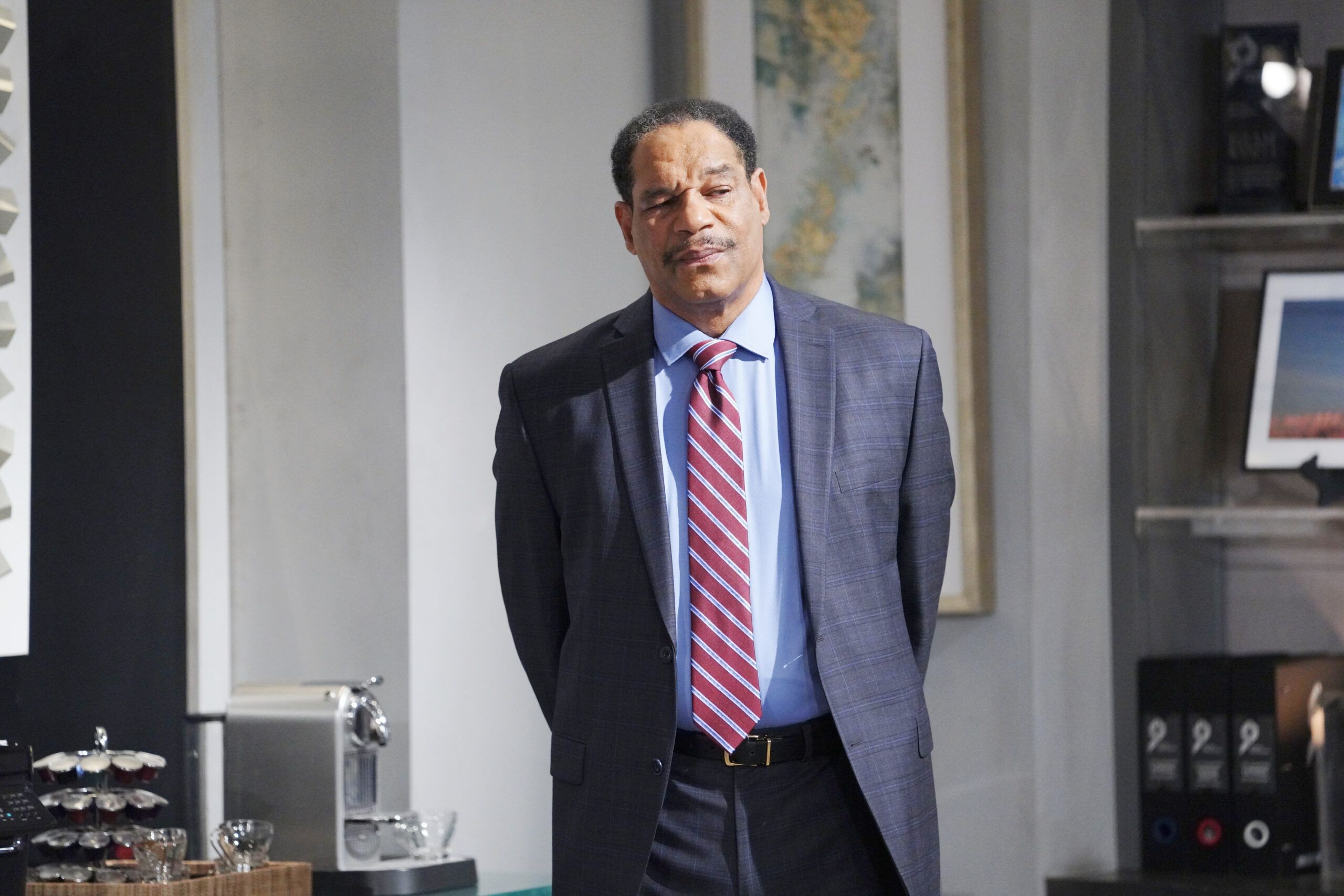 B&B spoilers tease that Ridge will be at Brooke’s side when she learns the truth about what Sheila has done. First, she’ll find out that the criminal shot Steffy and Finn. Then she’ll be flabbergasted when she learns that Sheila was the reason she broke her sobriety. Of course, Brooke will assume this puts an end to the whole chapter and Ridge will come home to her. 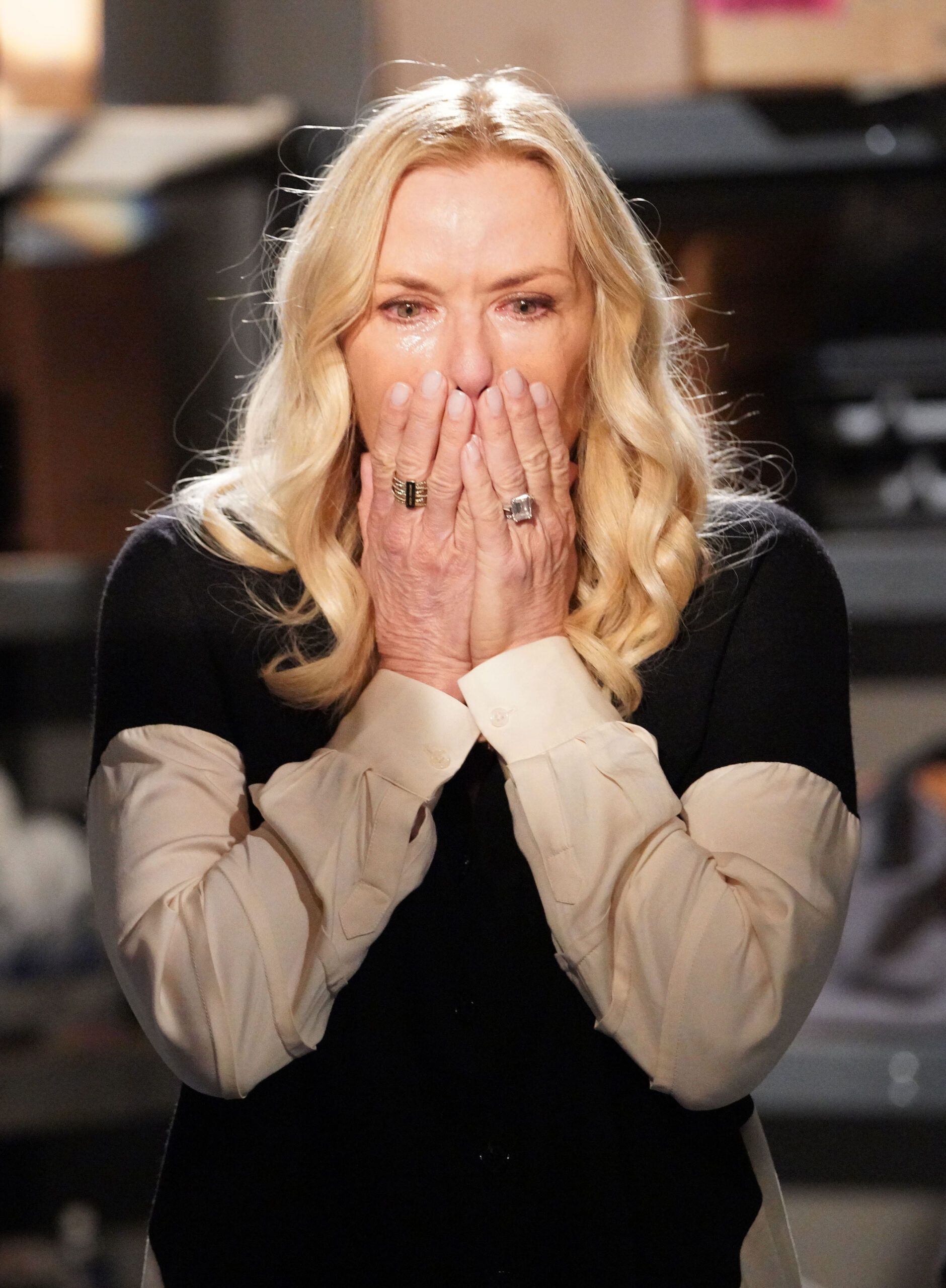 Taylor will be concerned that Ridge will return to Brooke, now that Sheila’s dirty deed has been exposed. And she’ll confide in Steffy that she’s worried about her relationship with her ex. Rumor has it, Taylor will speak her truth to Ridge when he reveals to her his future plans. But what are they? 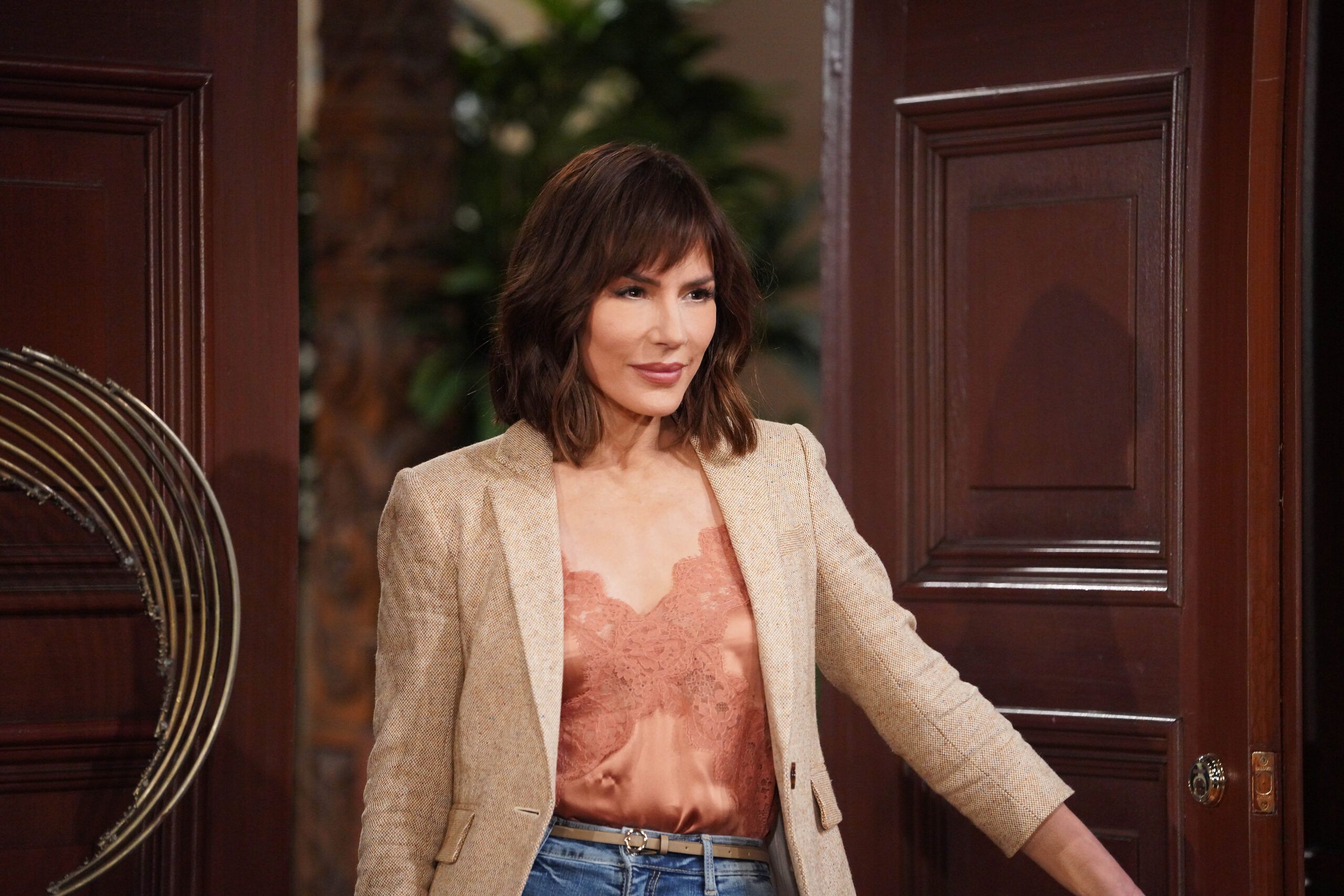 1. Who Will Ridge Choose?

After hearing about Sheila switching Brooke’s champagne labels on New Year’s Eve, Ridge will be torn about what comes next. As viewers know, he’s been growing closer with Taylor. They’ve bonded over their daughter’s tragedy during the past few weeks. But is Ridge still in love with Brooke or has he fallen for Taylor, and which woman will he choose? Keep watching B&B to find out! 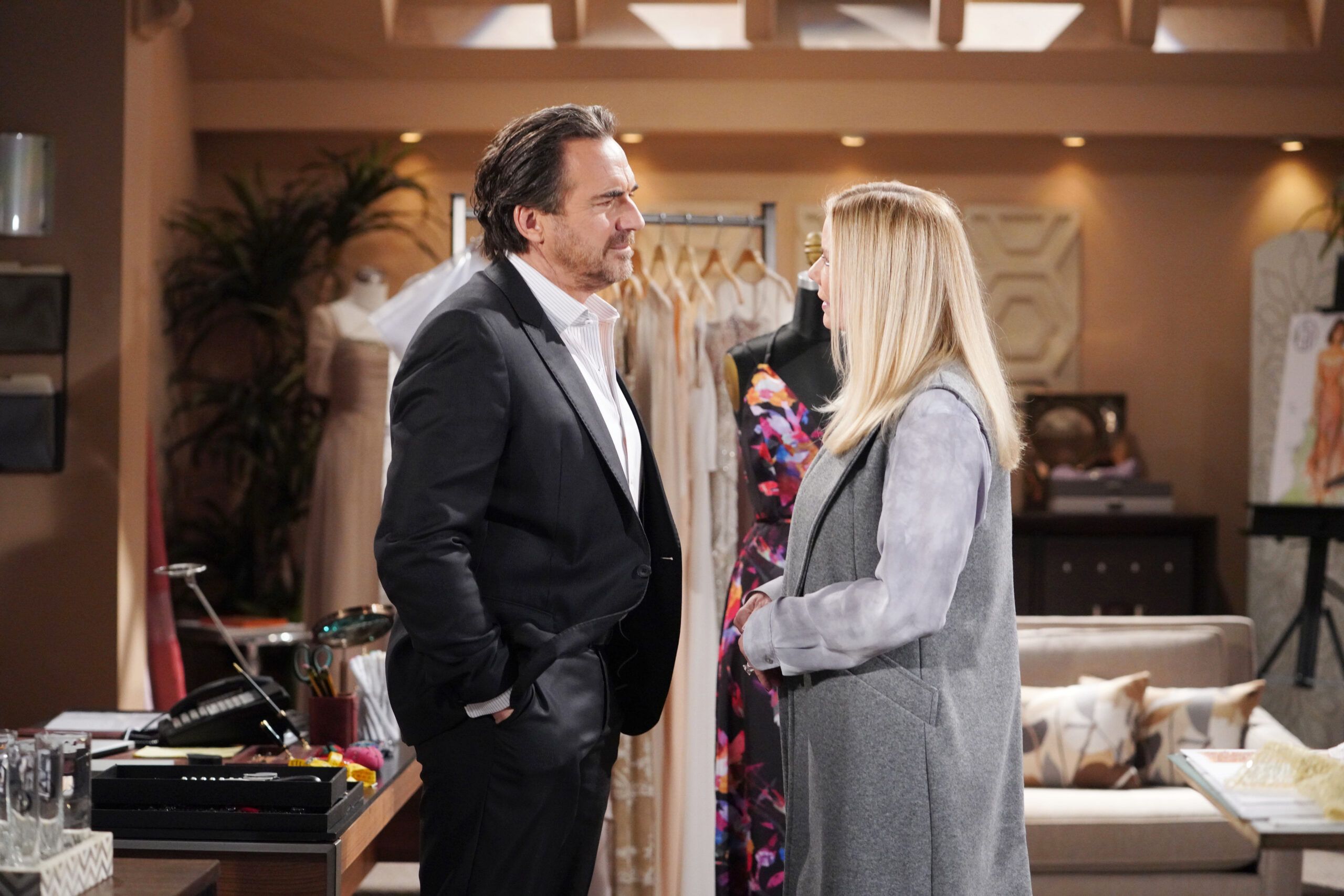 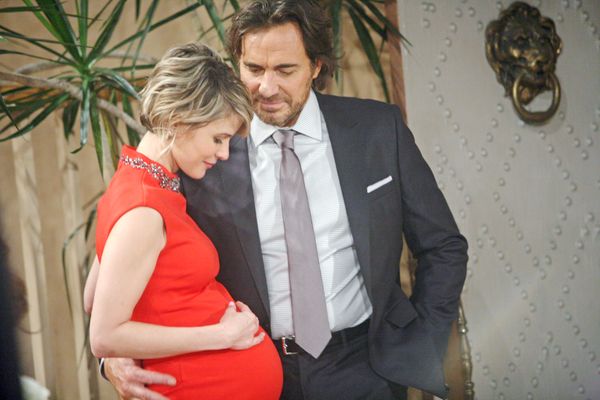