Thomas decides to influence the situation between Liam and Hope to his own advantage, this week on the Bold & The Beautiful (B&B). Also, with Flo back in town, Quinn is determined to put an end to Wyatt and Sally’s relationship. Plus, a marriage proposal may be in the works. Learn more below in the B&B spoilers for the week of April 22, 2019.

9. When A Man Loves A Woman

Liam will plan a romantic evening for Hope this week. He is hoping the evening will provide them with some time to just enjoy each other’s company, reconnect and forget their troubles, even if it’s just for a few hours. Liam will tell Hope he loves her and has missed spending time with her as husband and wife. Hope is still grieving but will try not to disappoint her husband. 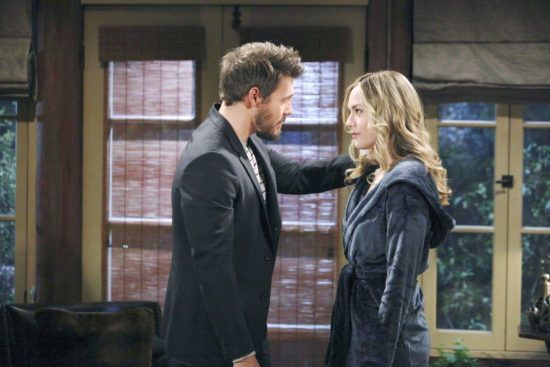 Rumor has it, Liam and Hope will make love this week. Hope has had many issues since she and Liam lost their daughter Beth on Catalina Island and she’s already expressed to him that she doesn’t ever want to be pregnant again. Maybe she’s afraid that if they are intimate, it could result in a pregnancy. Spoilers say that Liam will reassure her, and the couple will make love for the first time in months. 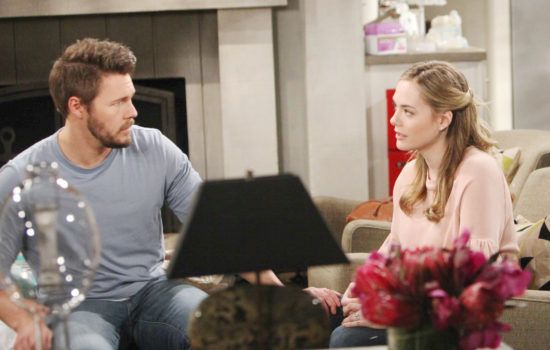 Thomas will feed into Hope’s guilt when she expresses to him that she believes Kelly and Phoebe should be growing up in a house with Liam. Thomas will tell her that he agrees with her that the girls would be better off living with two parents. Other spoilers indicate he will talk to Sally about Liam and Hope’s marriage and she will tell him they’re having problems and haven’t been intimate. Spoilers tease Thomas will confide in Sally that he wants to break up Lope so Hope can be Douglas’ mom. Sally will be puzzled and confused by it all. Will she tell Wyatt about this strange and disturbing conversation she had with Thomas? 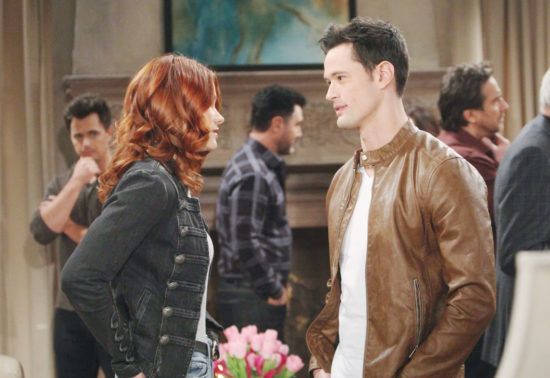 Spoilers tease Quinn is going to try to put an end to Wyatt and Sally’s relationship. Now that Flo is in LA, it’s become obvious to viewers, and to Sally, that Quinn would much prefer to see him back together with his high school sweetheart. She had no problem admitting this to Bill recently. Quinn should know better than to intrude in her son’s life again. Her interference in the past has done nothing but come back to bite her in the end. When the baby switch secret comes out eventually, will Quinn still see Flo as the pillar of virtue and the perfect woman for Wyatt? B&B fans know Sally is not going to take this meddling sitting down and will fight for her man. But how is Wyatt going to react to his mother trying to manipulate yet another one of his romantic relationships? 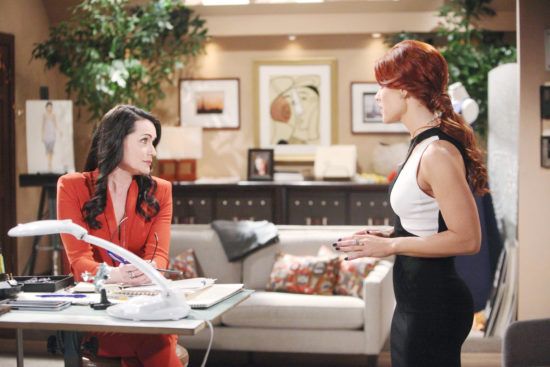 As if she wasn’t worried enough that the baby swap secret was going to come out, Zoe will have another concern to have to deal with, and it’s a doozy. When she returns to LA this week, she’s going to be none too happy to learn that Flo is related to the Logan family. In fact, she’s going to be absolutely horrified to hear of it. Zoe has constantly tried to convince Flo to go back to Vegas. Now that Flo’s mother Shauna is in LA and Flo has learned she’s a Logan, Zoe knows there will be no convincing her now. She can only hope for the best – that Flo will keep her mouth shut about the whole incident. 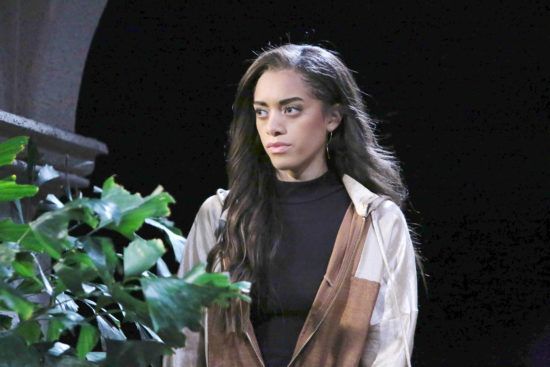 Viewers may get a glimpse of Steffy this week, as casting news indicates Nicola Posener will return as Amelia the nanny. Will Liam visit Steffy and his daughter in Paris this week? Or will he call her to set up a visit? Liam and Hope have discussed whether he should tell her that Phoebe’s “birth mom” Flo is a Logan. Clearly, Steffy has every right to this information. The last she knew, Flo had left LA and she would likely never see her again. But not only is Flo sticking around LA, but she has also become a part of Steffy’s extended family. Steffy will likely not be pleased by this news, and Liam may be concerned that she may not want to come home from Paris. 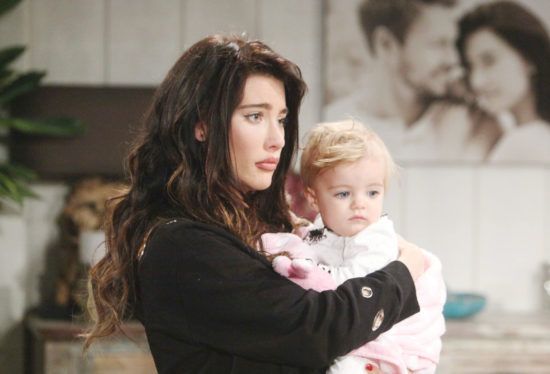 It looks like Simon, Tiffany and Emma will be back at Forrester this week, and spoilers show the interns will be reporting to Thomas. He will be rebooting Hope For The Future and will ask Tiffany and Emma to head up the line’s social media campaign. Rumor has it, he will send Xander to the production room with his new designs. When the interns ask him if Hope has approved any of the designs, he will not answer them and just tell them to get to work. 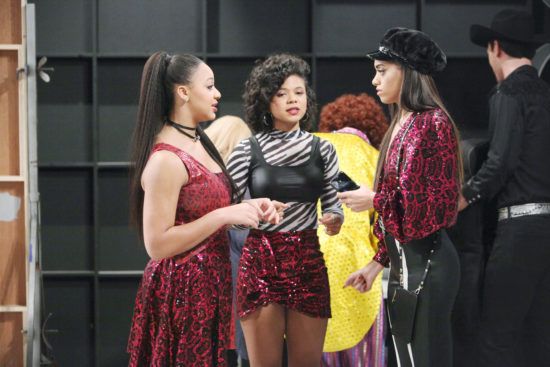 Spoilers tease Bill will make an offer to Katie to reunite their family. Bill and Katie have been growing closer over the past few weeks, partly due to their matchmaking Cupid Will. But will Bill want to take the next step in their relationship? Is he going to invite Katie and Will to move back into the house they used to share? 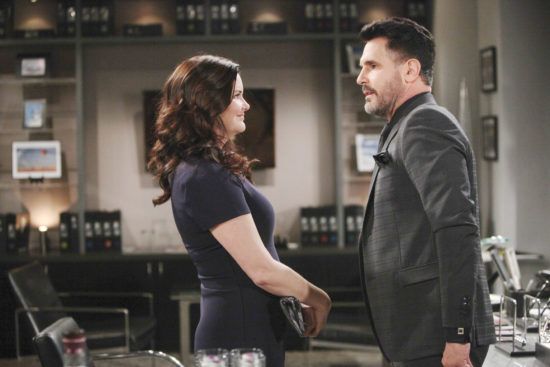 In other casting news, Robert Michael Lee will appear on B&B as a mysterious jeweler this week. Does this mean someone will be buying an engagement ring? All signs point to yes! And chances are good the person buying that ring will be none other than Bill. But if Bill does buy Katie an engagement ring and prepares to propose to her, will she agree to marry him? Stay tuned to find out! 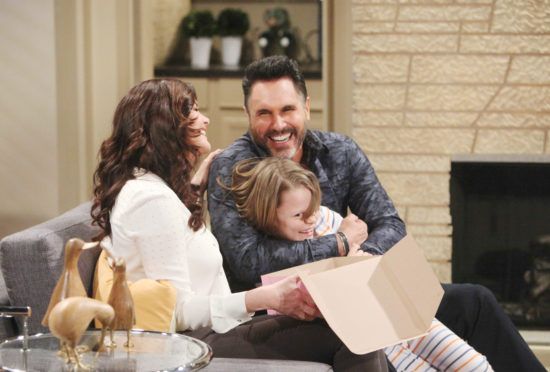 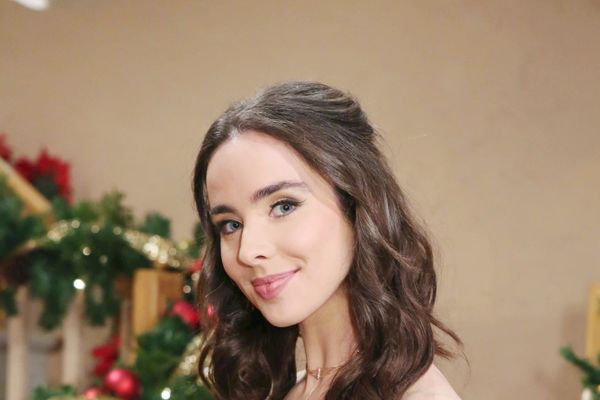