Finn will bond with Paris over the massive secret he’s keeping from Steffy, coming up this week on The Bold And The Beautiful (B&B). Also, Jack will warn Sheila to stay away from his son and his new family. Plus, Quinn will be stunned when Eric says he wants her back. Learn more below in the B&B spoilers for the week of August 16th, 2021.

B&B spoilers tease that Carter will be tired of sneaking around with Quinn behind everyone’s backs. So, is he going to break things off with her? That’s a big no! Carter will want to do the opposite. He’ll tell Quinn he doesn’t care if Eric fires him. He wants to go public with their relationship. But unfortunately for Carter, a very big wrench is going to be thrown into his plan.

Rumor has it, Quinn will be stunned when she visits Eric to sign the papers ending their marriage — and he tells her he wants her back. But what is Eric’s motivation here? Quinn broke his heart when she cheated on him with Carter, and he told her they were through for good. He even took her portrait off the wall, gave it to Carter and told him to trash it. However, it seems he’ll do a complete turnaround this week. Was seeing evil Sheila in the flesh again the driving force that prompts Eric to ask Quinn for a reunion?

Quinn will head straight to Carter’s loft to apprise him of Eric’s request. He will be surprised, to say the least. Quinn will hope Carter can help her understand Eric’s reasoning. But while they’re discussing this stunning turn of events, they’ll also declare their love for each other. However, in the coming weeks, Quinn’s going to have a big decision to make. Should she make a fresh start with Carter or return to Eric?

6. The Forresters Put Sheila On Notice

B&B spoilers tease that Steffy will channel her grandmother and order Sheila to stay away from her, Finn and her family. And the rest of the Forresters will seek out a way to prohibit Sheila from interfering in their lives. Maybe they’ll ask Carter to take out a restraining order. Ridge and Eric will lead the charge, but is there anything they can do to extricate themselves from Sheila, once and for all?

Rumor has it, Steffy won’t be the only one putting Sheila on notice. Finn’s father, Jack, will also have a warning for Sheila. He’ll tell her she’s to have no contact with Steffy and Finn, or he and his wife. Jack will say she never should have shown up in Finn’s life to begin with, much less on his wedding day. And if she knows what’s good for her, she better stay far away from him.

4. Sheila Will Not Be Ignored

The Forrester family wants Sheila banned from Finn and baby Hayes’ lives, but she’s not going to fade into the woodwork so easily. She’ll start texting Finn, telling him she’d like nothing more than to meet her grandson. She’d also like to get to know him; after all, he is her son. So, Sheila will suggest they meet on the sly. And despite Steffy’s wishes, Finn will text her back and he’ll remain in contact with his birth mother. But is he going to agree to meet with her?

Finn will discover he has a new confidant in his roommate, Paris. The two will become fast friends and he’ll confide in her that he feels torn between his wife and his birth mother. Finn will tell Paris he’s secretly been in touch with Sheila but is keeping it from Steffy. “He’s hoping that by sharing this with Paris, they can come up with some kind of game plan,” Tanner Novlan (Finn) recently told Soap Opera Digest.

As Finn continues to confide in Paris, they’ll find out they have something in common – villainous parents. Paris’s father, Dr. Reese Buckingham, is also despised by the Forrester family. Viewers will remember that Reese stole baby Beth from Hope and Liam, after telling them she was stillborn. Then he sold her to an unknowing Steffy. And of course, the Forresters have hated Sheila for years. Paris understands how it feels to still love and forgive your parent, despite the terrible things he or she may have done. Finn and Paris will bond as they lean on each other, but will it turn into more?

Finn will remain in touch with Sheila, despite Steffy’s demand that he has nothing to do with his birth mother. But Finn believes in forgiveness and second chances. After all, he gave Steffy another shot after she cheated on him with Liam. The doctor desperately wants his birth mother to be a part of his new life. However, this spells big trouble for Sinn. They haven’t even been married a week and Finn will already be keeping a massive secret from his new wife. But will it tear them apart? Keep watching B&B to find out! 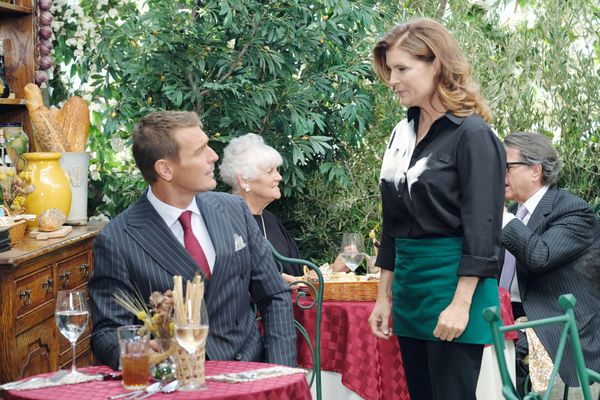