Bold And The Beautiful Spoilers For The Week (December 30, 2019)

Zoe will attempt to convince herself that Thomas’ feelings for her are genuine, and the pair will go out on a date together, this week on the Bold & The Beautiful (B&B). Also, Liam will become concerned when he realizes his Forrester spy is falling for her target. And a new man will ask Steffy out. Plus, a sneak peek at next week. Learn more below in the B&B spoilers for the week of December 30, 2019.

Viewers should note, a new episode of the B&B will air on Tuesday, December 31 on the east coast, however, the show will be pre-empted on the west coast for CBS Sports: The Sun Bowl. The west coast will see the New Year’s Eve episode on Wednesday, January 1 and east coast viewers will see an encore episode that day. B&B’s regularly scheduled programming will resume on Thursday, January 2.

Rumor has it, Zoe will continue to convince herself that she and Thomas have a future together. Despite the warnings of others, including Liam and especially Steffy, she’s falling for him and is hoping he feels the exact same way. She’s felt a connection between them for months, but is Thomas’ interest in her sincere? If it isn’t, can she convince him that she is his future, not Hope?

Spoilers tease Zoe and Thomas will go on a romantic date together. Their first date, a dinner at Forrester, was interrupted by Hope, so they’ll finally get a chance to go on a real date.  They’ve already kissed several times, and Zoe told Steffy she believed their kisses were real. But what she doesn’t know is that Thomas only kissed her to make Hope jealous. And rumor has it, Thomas and Zoe will also make love this week.

Other B&B spoilers indicate Hope will be anxious and unsettled by Thomas’ most recent actions. She’s clearly uncomfortable being in the same room with both he and Zoe. But are her reactions simply pangs of jealousy – or is she starting to have feelings for Ridge’s son? Or does she suspect he’s using Zoe to get to her? On the other hand, after all he’s done, perhaps Hope just feels that Thomas deserves to be alone.

Other spoilers show Thomas is looking to astonish Hope this week. Rumor has it he will ask Hope to babysit Douglas while he takes Zoe out on their date. Hope will be thrilled to spend some extra time with her adopted son. But will Thomas also arrange for Hope to somehow happen upon he and Zoe in bed?

Ridge is convinced that Thomas’ obsession with Hope is over and he has decided to move on with Zoe. Thrilled that Thomas is finally seeing the light of day, Ridge will attempt to convince Brooke that his son’s change of heart is real. He’s hoping if Brooke can accept that Thomas is no longer a threat to her daughter Hope, she will put her hatred of his son aside and give their marriage another chance.

Spoilers for this week also indicate that Liam will be stunned when he starts to suspect Thomas is already manipulating Zoe. Steffy hired her back at Forrester to spy on Thomas, not to become his ally. But it will begin to look like Thomas has already turned the tables on Liam and Steffy’s scheme. Liam will have a chat with Zoe and his greatest worries will be confirmed when she defends Thomas to him. Will Liam go to Steffy with his suspicions, or will he use his brother Wyatt as a sounding board first?

Rumor has it, Steffy will meet a new man at Forrester Creations. This mystery man will be captivated by her and will ask her out. Steffy may be flattered, but will she say yes and go out with him? Fans have been voicing their opinions that Steffy needs a new man for months now – will they finally get their wish?

Spoilers tease Thomas will try to coerce his sister Steffy into making a move on her ex-husband Liam.  But will his manipulation work? And Liam will propose to Hope, but with a startling demand. Will he make her promise never to leave him or annul their marriage again? Or will Liam ask Hope to sign partial custody of Douglas back over to Thomas? Keep watching to find out! 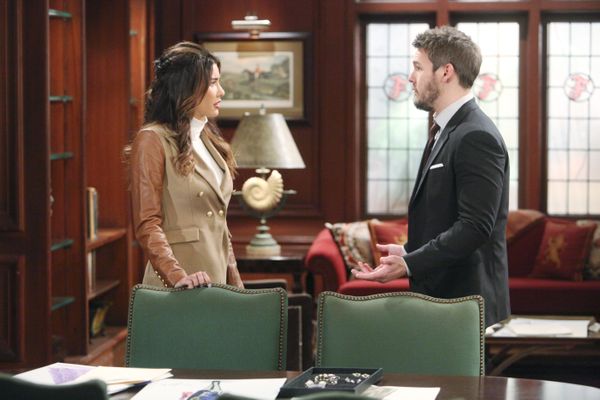 Bold And The Beautiful: Spoilers For Winter 2020