Steffy will make her final decision on whether to adopt an infant girl as a sister to baby Kelly this week on the Bold & The Beautiful (B&B). Also, Wyatt will question Steffy’s motives and have a warning for Liam, and Thatie’s marriage will start to show signs of cracking. Learn more below in the B&B spoilers for the week of January 21, 2019.

Now that Bill is stepping up as a father to Will, Thorne’s instant family isn’t exactly coming along as he had imagined. When he’d married Katie in the summer, he thought he’d be taking Bill’s place as Will’s father, but it sure hasn’t worked out that way. This week, as Thorne jealously watches Bill, Katie and Will spending time together, he will think back fondly and sadly on memories of his late wife Darla and their happy marriage and family.

When Wyatt finds out this week that Steffy is considering adopting a sister for baby Kelly, he will begin to question Steffy’s motives. Is she filling a void because she is no longer married to Liam? Wyatt then starts to wonder if Steffy has some kind of agenda and is hoping to win Liam back. Although she handed Liam over to Hope months ago, her decision did come with some regret and she is still in love with her ex-husband.

Spoilers indicate Wyatt will warn his brother about something this week after Liam asks him to keep a secret. Will the secret be Steffy has asked him to meet the baby she is considering adopting, but he’s not planning to tell Hope about the encounter? Wyatt may warn Liam to keep his distance from Steffy and the whole situation lest he upset his already distraught wife. He knows his brother is a flip-flopper and has admitted to him in the past that he wishes he could be married to both women. Wyatt will be concerned that the Waffler is starting to have feelings for Steffy again.

Speaking of Hope, another rumor making the rounds implies that Hope’s grief will reach its second stage. Her sadness will turn to fury and rumor has it, she’s going to lash out at her husband Liam. She will be very angry when he returns home from a visit with Steffy and his daughter Kelly. Hope will tell him he will never be able to comprehend how she feels about losing baby Beth because he has a child, whereas, she is childless. Liam will be completely shocked by his wife’s wrath.

Spoilers show Flo will find evidence this week that Reese is using her for a different agenda than what he’s told her. Up until now, Flo has believed that Reese is trying to hide the fact that the baby’s real mother is a deadbeat. But will she discover proof that he kidnapped a baby from the Catalina Island clinic? Or does she find out that his daughter Zoe is in danger because of his gambling debts? Either way, it looks like Flo will begin to question Reese’s motives in the whole adoption scheme.

4. Stick With The Plan

Later in the week, Flo will confront Reese about what she knows, but he will tell her to stick with the plan. He knows he’s set everything up perfectly and is very close to reaching his goal and collecting the money from Taylor and Steffy. He doesn’t want Flo to ruin things for him now. But if the baby up for adoption really is Hope and Liam’s daughter Beth, will Flo eventually be the one to blow Reese’s plot wide open?

3. Eyes On The Prize

Reese will be practically salivating this week over the cash he’s going to make from the two suckers he’s hooked. But will Taylor and/or Steffy agree to pay him cash for the baby and, if so, will he get the money in time to pay off his debts and save his daughter from the thug? And, who knows, he may even ask the women for more than $200,000, thinking a little bit of extra money could go a long way.

Zoe, Tiffany and Emma decide to have a bit of fun together and audition for a talent competition this week. Zoe will be excited about it, but she will be unaware that a thug has been following her and that by entering and participating in the contest, she is putting her life at risk.

Steffy will make her decision on whether she will adopt “Flo’s” baby this week. Rumor has it, she will feel a special bond with the infant when she meets her. Fans have noticed that “Baby Phoebe” is already in the B&B end credits, so it looks like she will decide to go through with the adoption and name the child after her late sister. Spoilers indicate that adopting the child will affect Steffy’s life for years to come. 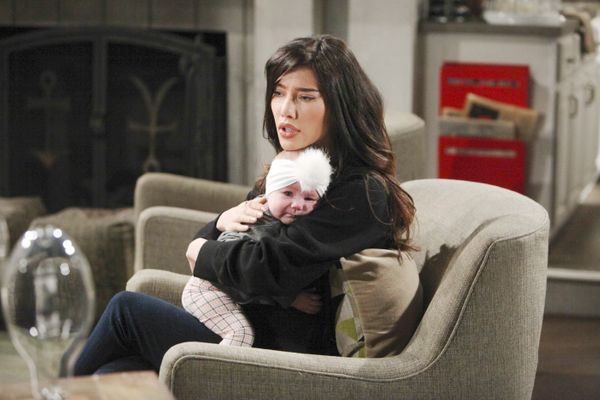 Bold And The Beautiful: Spoilers For January 2019