Thomas finds out the truth about the baby switch and confronts Flo, this week on the Bold & The Beautiful (B&B). Also, Liam will move in with Steffy and the girls and Zoe will question Xander’s feelings for her. Plus, a sneak peek at next week. Learn more below in the B&B spoilers for the week of June 10, 2019.

Spoilers tease Thomas will be incredulous when he accidentally discovers the baby switch secret. He knows a secret this massive getting out could destroy the plans he has for his future with Hope. It could also ruin any possible Steam reunion and leave Steffy heartbroken in its wake, if she had to give Phoebe over to Hope. Thomas will confront Flo this week and she will break down and try to justify her actions to him. She will also beg him to keep the secret. It looks like Thomas will struggle with the information, knowing that any action he takes, someone is going to get hurt.

Brooke is still reeling over Hope ending her marriage to Liam for the sake of the children. And even though they’ve signed the annulment papers, she feels it’s not too late for Lope. This week, she will push Hope to reconsider her choice and tell her daughter that leaving Liam is not the answer to her pain over losing Beth. Spoilers show mother and daughter will argue about Hope’s decision.

Ridge starts to become concerned that his relationship with Brooke is being negatively affected by their children’s problems. He knows his wife gets angry with him when he even suggests that Liam belongs with Steffy and her daughters. He has become hesitant to even discuss the children with Brooke these days, and for good reason. The baby switch secret has already claimed Lope’s marriage, will it also destroy the Bridge marriage in its wake?

This week, Liam accepts Steffy’s offer to move in with her at the cliff house, so they can raise Kelly and Phoebe together. Since the break-up of his marriage to Hope, Liam has been over to her house a lot more often to see his daughter. So Steffy figured she may as well put the offer out there, so Liam can reunite with Kelly and see her every day. But in the back of Steffy’s mind, is she also considering reuniting with Liam herself?

Xander is still adamant that he will find a way to tell Liam and Hope their daughter is alive. After Xander found out the baby switch secret, Zoe was sure that once he calmed down, he would keep his mouth shut. She assumed he wouldn’t want to see her go to jail. But now she’s not so sure and Zoe will start to question Xander’s feelings for her.  She never wants the secret to come to light, but would she harm Xander if he continues to threaten to disclose it?

This brings up an obvious question. Spoilers have teased for weeks now that someone who knows the baby switch secret will die soon. Speculation indicates this person is none other than Xander. He may suffer some horrible accident, or something more sinister could happen. Will Xander be murdered? And if he does go to meet his maker, who will kill him? There’s no question Zoe loves Xander, but if he continues to insist he’ll spill the beans to Hope, would she kill him to protect herself from going to jail? Her father Reese could catch wind of Xander’s knowledge and fly to LA from London to do the job. Or, as many are speculating, once Thomas finds out about baby Beth, he may do anything to protect his budding relationship with Hope. But would he commit murder?

The Three Stooges welcome a new troupe member this week. Shemp (Xander) makes his debut as he argues with Larry (Zoe) and Curly (Flo) about baby Beth. With Moe (Shauna) out of town, the Stooges have no one to reign them in when they keep running their mouths. And yes – you guessed it – someone else will overhear them. This time it’s Wyatt, and spoilers show he will demand answers from the idiots deluxe. Whether he hears the whole truth or not remains to be seen, and spoilers indicate he won’t be the last one to eavesdrop on these three dummies.

Rumor has it, Thomas will have a change of heart about keeping the secret. At first, he will demand that both Hope and Steffy be told the truth before any more damage is done. But the more he reflects on it, the more he realizes that keeping the truth from the two Sister Wives is what’s best for him. He will back up his newfound belief by stunning Zoe, Flo and Xander when he threatens them this week.

Spoilers tease that someone else will learn that Beth is alive – but who will it be? It seems like everyone in LA will find out before Hope, Liam and Steffy finally hear the truth. Also, now that Hope is on her own, she is ripe for the picking and Thomas will continue to manipulate her. Viewers know she only left Liam for the sake of Phoebe, Kelly and Thomas’ son Douglas. But Thomas has made it very clear he’s interested in pursuing a romantic relationship with her. With her marriage to Liam over, will she finally give in to Thomas next week? Stay tuned! 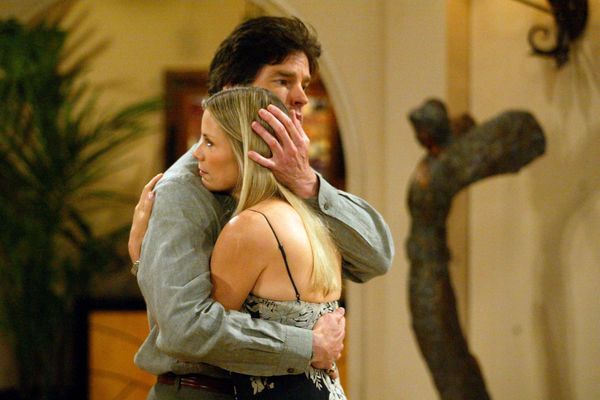