Brooke will be stunned when she witnesses a moment between Ridge and Taylor, this week on the Bold & The Beautiful (B&B). Also, the families gather together after they hear about the shocking death of one of their own. Plus, a sneak peek at next week. Learn more below in the B&B spoilers for the week of March 18, 2019.

Programming note – the B&B will be preempted on Thursday, March 21 and Friday, March 22 this week, due to March Madness basketball coverage on CBS. Viewers will have to wait until Monday, March 25 to get their B&B fix and find out what happens next to the Spencer, Forrester and Logan families.

8. Katie Falling For The New Bill

Rumor has it, Katie will fall harder for ex-husband Bill this week. She sees he’s made a big change, in his life and in his thinking, and this will make him all the more attractive to her. In fact, she sees in him the man she fell in love with all those years ago and begins to believe that maybe he’s an even better man than he was back then. He’s stepped up for their son Will, and for her, since her break-up with Thorne. Bill has broken her heart in the past, so she’ll still be guarded, but she’s thinking a reunion with Bill might just be possible.

First it was a chance meeting at Il Giardino, and as Bill and Katie continue to “accidentally” bump into each other, they begin to see a pattern forming. But who is the Cupid who keeps setting them up? The pair take it all in stride though and both Bill and Katie begin to secretly wish for an unintended encounter.

6. Could Taylor Set Off A Bridge Collapse?

When Brooke spies Ridge and Taylor kissing this week, she will be furious. She eventually forgave Ridge for kissing Quinn the day before they were supposed to marry, and he promised he would never do it again. But once a cheater, always and cheater, and Ridge has always had a wandering eye. Will Brooke confront Ridge or Taylor about what she saw? Or will she go running to Bill? Brooke defended Ridge’s loyalty to her many times when her Stallion pursued her last year. Now that it’s looking like Batie is heading for a reunion, are viewers going to see Brooke go after Katie’s man a third time?

Thomas will be moved to see Hope connecting with his son Douglas this week. Once Steffy has left for Paris with baby Phoebe, Hope will begin to feel a little lost. It looks like Douglas will be the remedy she needs to get over that loss. As he watches Hope with his son, will he start to develop feelings for her? And will those feelings start to be reciprocated?

It looks like Taylor’s interference won’t end with her insistence to Steffy that she should take Liam back and fight for her family. As she watches Hope and Thomas together, the doctor will mention to Ridge that she thinks they would be good for each other. It seems like she’s becoming increasingly desperate to break up Lope by any means necessary. B&B spoilers tease that Taylor also notices a bond is beginning to form between Hope and her grandson Douglas.

Spoilers tease Sally will apologize to Thomas about their break-up. This rumor has surprised fans, who are asking why Sally would feel the need to apologize for anything when it comes to her ex. But Sally and Thomas’ split occurred offscreen in New York, and all viewers saw and heard was Sally’s side of the story when she returned to LA after Thomas dumped her. Maybe Sally had jealousy issues or did something else to precipitate it? Could the break-up have been her fault? It looks like Wyatt will be worried as she speaks with Thomas, who will assure her she has nothing to apologize for.

This week, the Spencer, Forrester and Logan families will gather to honor someone who has passed away. Rumor has it, that someone is Caroline Spencer. With the return of Thomas, and his son Douglas in tow, in makes sense that he’s come home to Los Angeles. He’s likely looking to seek comfort in the arms of his family after the mother of his child has died.

After witnessing Taylor kissing her husband, Brooke will accuse her nemesis of still being in love with Ridge. The two will argue and rehash their past and spoilers tease the argument could get physical. Will all this lead to a knockdown, drag-out fight, similar to the epic Brooke-Taylor brawls (wedding cake-flinging, in the mud, in a pond) we’ve seen in years past? Keep watching to find out! 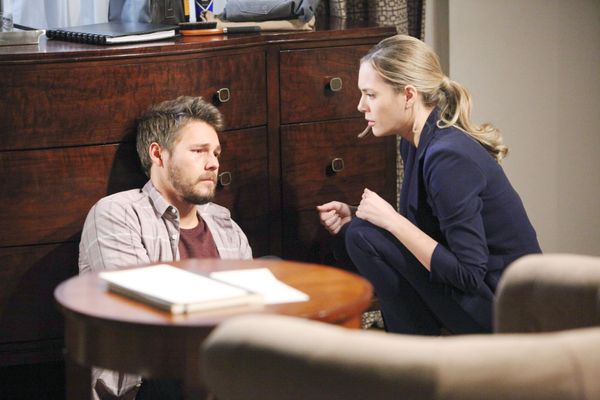