Bold And The Beautiful Spoilers For The Week (November 22, 2021)

Finn will be heartsick and furious when he finds out Jack is his birth father, coming up this week on The Bold And The Beautiful (B&B). Paris will be taken aback when Thomas confesses his true feelings for her. Plus, Ridge and Brooke will host the annual Thanksgiving dinner. Learn more below in the B&B spoilers for the week of November 22nd, 2021.

The B&B will not air a new episode on Thursday, November 25th or Friday, November 26th due to the Thanksgiving holiday. Thursday’s show will be a repeat. For viewers who missed it the first time around, or who’d like to see it again, Steffy and Finn’s August 2021 wedding will be shown. The happy couple will say their “I do’s” in front of all their family and friends. Plus, Friday’s show will be pre-empted for CBS college football. New episodes will return on Monday, November 29th.

This year’s Thanksgiving episode will be a little different from years past. As an alternative to Eric’s usual event, Brooke and Ridge will host the feast at their home for the first time. Invited guests will include Steffy, Finn, Carter, Katie, Hope, Liam, Zende and Paris. It can be assumed that Quinn won’t be there, but will Pam and Charlie attend to make sure the meal goes off without a hitch?

Although the Thanksgiving dinner will not be at Eric’s mansion this year, will the Forresters and the Logans continue with some of their familiar traditions? For the past few years, everyone around the table has had to say something nice about the person sitting to their right. But will viewers see them carry on the custom this year?

On the other side of town, the two resident B&B criminals will feel rather depressed and disillusioned. Sheila and Deacon will eat takeout in Sheila’s hotel room. And the pair will fantasize about what it would be like to share the Thanksgiving holiday with Finn and Hope. Sheila will complain to Deacon that instead of enjoying a turkey dinner with their children, they’re spending the holiday eating Chinese takeout instead — all thanks to the Forresters.

Finn will be angry and heartsick when he hears the truth about his paternity from Jack. The man he thought was his adoptive dad has been his biological father all along. Finn will also be incredulous that Jack kept the truth from he and his mother for more than three decades.

Rumor has it, after Jack tells him the truth about his parentage, Finn will tell his father to get out of his house and his life. He’ll express outrage towards Jack for his deception and his lies. For more than 30 years Finn wondered who his birth mother and father were, but Jack had known all along.

Sheila will see how regretful Jack is and use it to her full advantage. She knows she no longer has Finn’s paternity secret to hold over Jack’s head, now that it’s finally out. So, she’ll use his pain against him to benefit her. But how will Sheila continue to employ Jack in her plan to get closer to her son?

B&B spoilers tease that Thomas will stun Paris when he confesses his feelings for her. Ever since he saw her singing the national anthem at the Dodger’s game, Thomas hasn’t been able to get her out of his head. But does Thomas truly care for Paris, or is she just the latest in a long line of women he’s become obsessed with?

Not sure who to turn to, office gossip Paris will tell the first person she sees about Thomas’ confession. And it’ll happen to be Carter, who has already witnessed an awkward moment between the two. Paris will tell Carter that Thomas confessed he’s smitten with her, and she has no idea what to do about it. But will a stunned Carter give Paris any meaningful advice? Keep watching B&B to find out! 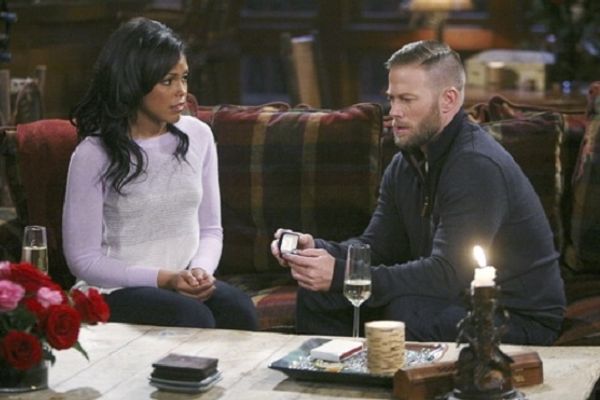