It’s been over 20 years since Clueless introduced us to the fabulous Beverly Hills lifestyle of teenager Cher Horowitz. Released in 1995, the film became a surprise hit at the box office, and has since garnered a cult following. For actors like Alicia Silverstone, Breckin Meyer, and Donald Faison, Clueless was their big break in the entertainment industry. If you grew up during the 90s, you probably remember the influence that Clueless had on fashion and teen life. (Fluffy pens, anyone?) The film is also one of the most quotable movies of the 90s, and created a new generation of teen attitude. How many of these Clueless quotes do you remember?

Cher: “So okay, I don’t want to be a traitor to my generation and all but I don’t get how guys dress today. I mean, come on, it looks like they just fell out of bed and put on some baggy pants and take their greasy hair (eww!) and cover it up with a backwards cap and like, we’re expected to swoon? I don’t think so.”

Cher: “Searching for a boy in high school is as useless as searching for meaning in a Pauly Shore movie.”

Cher: “She’s my friend because we both know what it’s like to have people be jealous of us.”

Dionne: “Hello, that was a stop sign.”
Cher: “I totally paused!”

Cher: “Dionne and I were both named after famous singers of the past, who now do infomercials.”

Cher: “He does dress better than I do, what would I bring to the relationship?”

Amber: “Ms. Stoeger, my plastic surgeon doesn’t want me doing any activity where balls fly at my nose.”
Dionne: “Well, there goes your social life.” 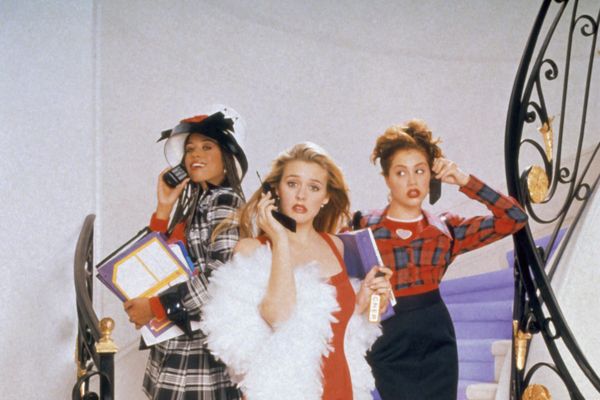