It’s the most wonderful time of the year! It’s tradition to dig up and dust off the classic Christmas movies we all love to watch once a year, and there’s plenty to choose from, but let’s turn our attention to the small screen! When our weekly television shows dedicate an episode to Christmas, it’s typically the best gift ever. In honor of this, we are here to spread the holiday cheer from our favorite shows of the past and present, so get ready to cozy up to the television because here is a compiled list of the best TV Christmas episodes to watch over the holidays:

Season 1 is still the honeymoon stage of Serena and Dan’s relationship which is one of our favorite things to remember, but in this episode, the couple needs to find each other gifts under their spending limit of $50. Being the creative mastermind and all, Dan comes up with the perfect swoon-worthy gift of Christmas spirit by bringing Serena a real Christmas tree to her cold and non-homey hotel room. After a bit of trouble, Serena comes up with a non-materialistic gift and it’s pretty romantic. Serena transforms Dan’s green Christmas by decorating Rufus’ art gallery with projected images of a snowy forest while pieces of white confetti fall like snow. Dan then gifts Serena with the beginnings of his story inspired by the blonde beauty. Creepy or romantic — we’re not quite sure. But to top it all off, when the couple wakes the next day and looks up at the ceiling window of the art gallery — it’s snowing! Hallelujah. 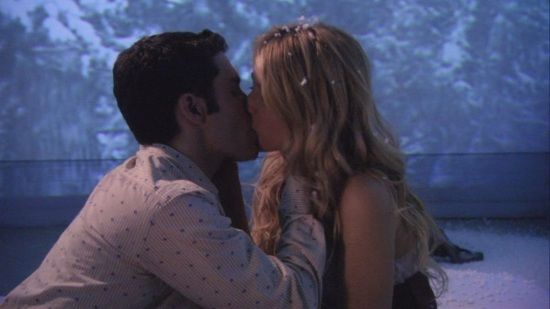 9. Grey’s Anatomy, “Grandma Got Run Over By a Reindeer”

This Christmas episode made all our hearts grow three sizes bigger by teaching us a little lesson on having faith. Christina and Burke are at odds over philosophical differences as their patient, a little boy, is refusing his heart transplant because he doesn’t believe Santa sent it to him like his mother insists. Christina bonds with the little boy over their shared skepticism. She wants him to take the heart but doesn’t agree with believing in something outside medicine. Meanwhile, Alex is trying to prepare for an exam so Meredith calls on the others to help him through it. Of course, Izzie refuses because she’s upset he cheated on her, but for once Meredith is the one to save the day and convinces Izzie to channel her inner holiday spirit to help Alex. Derek isn’t in a festive mood with his estranged wife, Addison, because he believes the holidays are about being with the one you love [aka Meredith], and he isn’t. 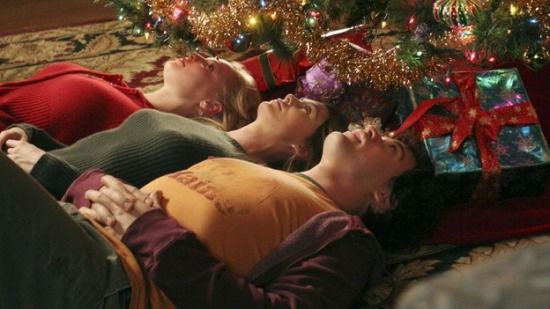 We can always rely on Gilmore Girls to not push the sappy feelings — we get a taste for it, but it’s never overwhelming. The episode “Forgiveness and Stuff” is great because it offers up some holiday feel goods without being too cheesy. Lorelai gets dis-invited to her parents annual Christmas party over a fight with her mother. She mopes around, then heads to Luke’s diner to complain (and subtly flirt) about not being able to attend her own family’s tradition, which seems odd because Lorelai is usually making the opposite complaint. Luke cheers Lorelai up with a disgusting Santa-styled burger, but in the midst of all this, she gets a phone call that Richard is in the hospital. She rushes to his side proving to them all that through thick and thin, family matters most. The episode shows that no matter how much we might be at odds with our family, Christmas is about being together. 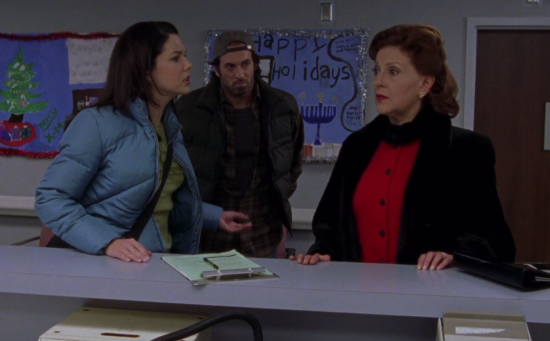 This episode had to make it onto the list for the sole reason that it was the beginning of Chrismukkah! Seth coined the phrase to combine his parents’ religions. This first Chrismukkah episode is the first of four and definitely the most lighthearted — despite Marissa’s typical woes, but that’s not unusual. The best part about the episode is Seth, a boy who is usually unnoticed by women, who finds himself playing both Anna and Summer because he can’t choose between the two. In the end, the two girls gift him with the responsibility of choosing between them once and for all. Meanwhile, Ryan experiences a Chrismukkah miracle when he gets off without a hitch after being pulled over driving Marissa (who is drunk) home. Despite Ryan stating that he hates Christmas, the episode ends with him hanging his new stocking and joining his new family, Kirsten, Sandy, and Seth on the couch for a movie.

Jack’s mother sets out to reveal that Liz Lemon’s family isn’t as cheerful as they seem and she succeeds by making them all turn against each other. Liz accidentally reveals to her brother, whose memory is stuck on December 7, 1985, that he’s actually 40-years-old. Meanwhile, the TGS writers prepare for their annual Christmas party known as Ludachristmas. But Tracy is upset because he has to wear an alcohol-monitoring ankle bracelet and no one in the office knows the true meaning of Christmas, so he takes things into his own hands. He locks them up for a depressing evening of Bible studies and videos of refugees who don’t get real gifts. Their failed party leads them to get drunk and attempt to chop down the Rockefeller Center Christmas tree. Cheers to that! 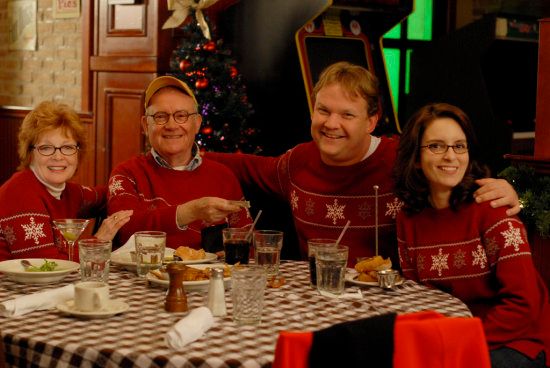 Phil coins the term “Express Christmas” after they all find out that none of them will be together on the actual day of Christmas. In typical Phil fashion, “ho-ho-hold up” they decide to celebrate right then and there and set up their holiday in less than 24 hours. Tasks are delegated to each person: Phil and Manny are responsible for getting the turkey; Claire and Haley shop for gifts; Gloria and Luke retrieve the angel from the attic; Jay and Cam wrap gifts; and Mitch, Lily and Alex have to get the tree. Of course, things go awry for each character and in the end, Jay offers to take everyone out for Chinese food. He wants to get them all out the door so that the workers he hired to set up the snow-making machine can finish up and the family can enjoy Christmas in a wonderful winterland! The biggest Christmas miracle? Jay lets Cam give him a holiday hug. 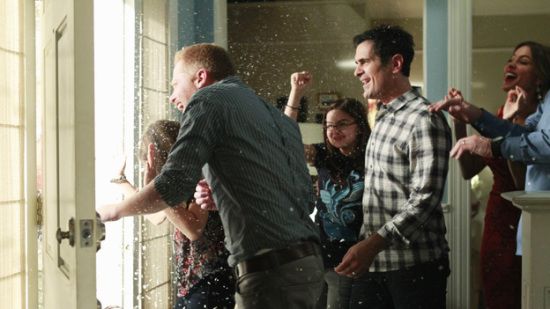 This Christmas episode is a way-back-play-back, but one that we love to tune into time and time again. The Tanner family gets snowed in at an airport on Christmas Eve, threatening to ruin Christmas. Danny is upset because it’s a trip that he’s spent months planning; D.J. is upset that all the gifts they brought with them are now missing; and in typical kid fashion, Stephanie’s only worry is that Santa won’t be able to find them to deliver their gifts. Uncle Jesse gets fed up with the whole gang and their sour attitudes. He does his best to lecture them all about the true meaning of Christmas. They may be stuck in baggage claim on Christmas eve, but at least the family is all together. The next morning, Santa shows up and leads them to their gifts. 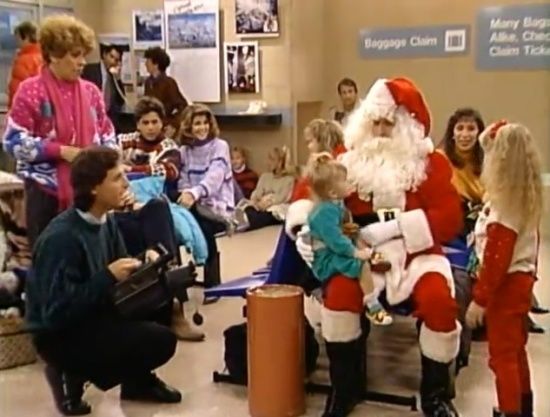 Micheal has a true gift for not picking up on normal social cues, but we love him regardless because it’s always seemingly innocent. Of course, nothing is different at the office Christmas party. The gang is opening their secret Santa gifts, but when it comes around to Michael, he’s not happy with his handmade gift. He declares a game twist of “Yankee swap” and gifts begin to fall into the wrong hands as he ends up derailing Jim’s heartfelt gift with personal items to Pam. It’s a great episode for fans rooting for the Pam and Jim romance and despite Michael’s constant mishaps, at the end of the day, they are all a small dysfunctional office family. 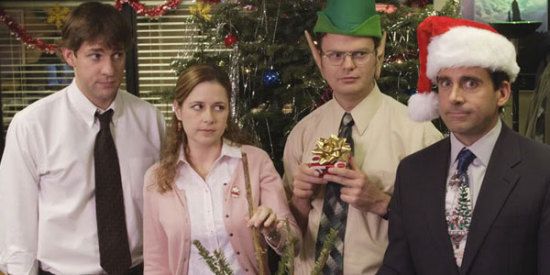 Mindy Kaling never fails to entertain on The Mindy Project, and this Christmas episode is no exception. Mindy goes to great lengths to throw a holiday party for the entire office building. She has a secret agenda, she’s only doing it so that she can spend more time with Cliff, but her elaborate plan to seduce him falls through. Firstly, Cliff shows up and is mislead into thinking that Mindy isn’t at the party and then Mindy’s thunder is stolen by Brendan’s date Maria Menounos’s rendition of “Santa Baby.” Wallowing in self-pity, Mindy resorts to getting drunk off her wine bra. The best part of this episode? We begin to realize that Danny cares a lot about Mindy…and he shows off a secret talent. Danny had been refusing to participate in the secret Santa gift exchange, but in order to cheer Mindy up he offers up some moves to an impeccably timed dance routine (which is awesome BTW). Our only Christmas wish is to see that performance again! 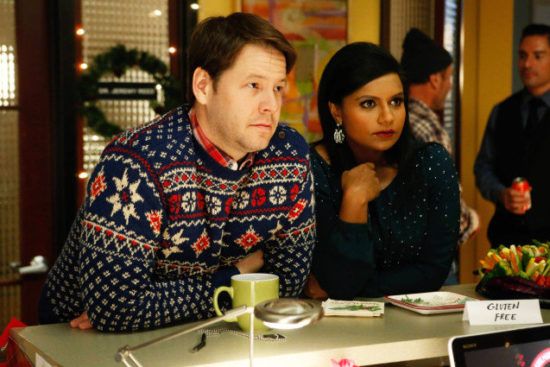 Rachel and Phoebe are all searching through Monica’s apartment for their Christmas presents while Ross and Monica are at the New Years Eve taping for Dick Clark’s New Year’s Rockin’ Eve. Rachel, Phoebe, and Chandler finally find the gifts Monica so coyly hid! They are about to open the gifts when Chandler talks them all out of ruining the surprise of opening their gifts on Christmas day. When the show is almost over, Monica and Ross realize they haven’t made it on camera. They decide to do their hilariously embarrassing dance routine from sixth grade in order to get some screen time, but unfortunately, it only makes it onto the blooper reel. 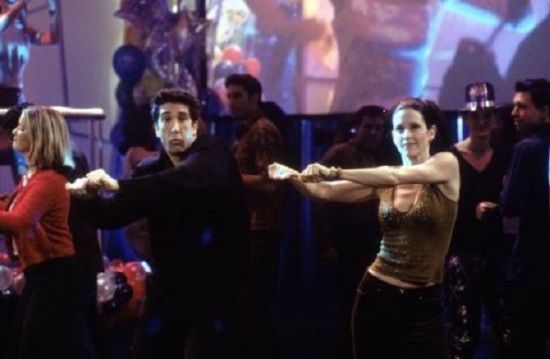 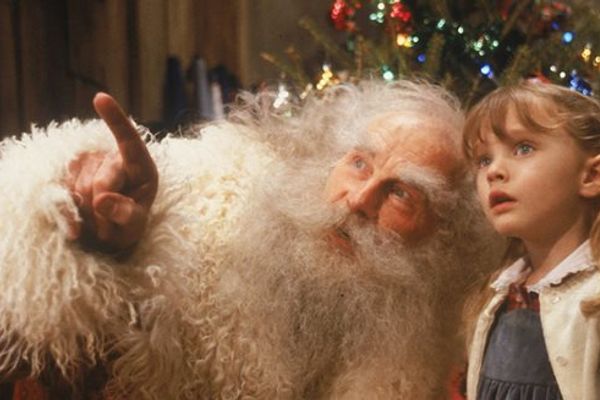