Growing Pains was a popular sitcom that aired on ABC from 1985 to 1992. It was the launching point for many stars like Alan Thicke, Joanna Kerns, Kirk Cameron and even Leonardo DiCaprio! The show followed the lives of the Seaver family which consisted of a dad, Jason, who works from home as a psychiatrist while his wife Maggie returns to work as a reporter, and their four kids! Similar to many other sitcoms, Growing Pains had a lot of guest stars over the course of seven seasons; many were just at the beginning of their career and have now gone on to become hugely successful stars! Here are 10 celebrities you probably forgot guest starred on Growing Pains!

Before she became widely known as Kirsten Cohen on The O.C., Kelly Rowan guest starred on Growing Pains as Rachel, a single mom who watches the attention of Mike, in the episode “Daddy’s Mike” of season 6. Mike meets her after he attends a meeting for single parents with his friend Eddie. Their relationship doesn’t last long because he quickly begins to feel bad about lying to her about being a father.

After a guest role on Growing Pains as Sandy, he co-starred on one of the most popular television shows of all time — Friends. Matthew Perry is now best known for his long standing role as Chandler Bing, but before that he appeared on Growing Pains for three episodes as Carol Seaver’s boyfriend, Sandy. Perry was written off the show when his character got into a car accident after drinking and the producers felt it necessary to teach viewers a lesson about drinking and driving so they killed him off.

At the age of 16 Leonardo DiCaprio was already defining himself as a teen heartthrob when he appeared on Growing Pains between 1991 and 1992 in the recurring role of Luke Brower, a homeless teenager taken in by the Seaver family. His role came at the end of the series, right before his film career began to take off, but it was definitely clear, even in the early days of his career that he would make it big.

Jennie Garth appeared on Growing Pains as a girl in a red convertible who flirts with Ben and Mike. This was before she became famous from Beverly Hills, 90210 as Kelly Taylor.

Who knew this once guest star on an ’80s family sitcom would become a huge A-list celebrity? He appeared in two separate episodes of Growing Pains as two different characters. He first appearance came in 1987 when he was 24-years-old in the episode “Who’s Zoomin’ Who?” as a classmate who flirts with Carol. He returned again in 1989 in the episode “Feet of Clay” to play the musician Jonathan Keith.

It should come as no surprise that Robin Thicke once appeared on the show that made his father famous. He played an extra in two different episodes before he landed the minor role of Ralph, one of Ben’s classmates. The role lasted three episodes in 1989. Thicke was only 12-years-old at the time. There’s even an interview of him at the age of 13 with his dad on the set of the show where he talks about one day becoming a musician.

One of Heather Graham’s first roles as an actress came in 1987 on the set of Growing Pains when she was only 17-years-old. Similar to Brad Pitt, she appeared in two separate roles in two different episodes, first as a girl named Samantha and later as a girl named Cindy.

This Hollywood actress had a two-episode arc on Growing Pains as Sasha, a friend of Luke’s who he met on his first day at Dewey High. At the age of 16, this was one of Hilary Swank’s first roles as an actress as she starred alongside an also teenaged Leonardo DiCaprio — what a way to start!

Candace Cameron Bure appeared on her brother Kirk Cameron’s show Growing Pains the same year she started co-starring on her own show Full House in 1987. In her guest appearance she played one of Mike’s classmates named Jennifer “Jenny” Foster. Her brother returned the favor a year later when he appeared on Full House as D.J.’s older cousin, Steve.

Another future Beverly Hills, 90210 star! Brian Austin Green appeared on Growing Pains as a rapper in Fresh Kid’s Music Group back in season 6. At the time he was only 18-years-old. 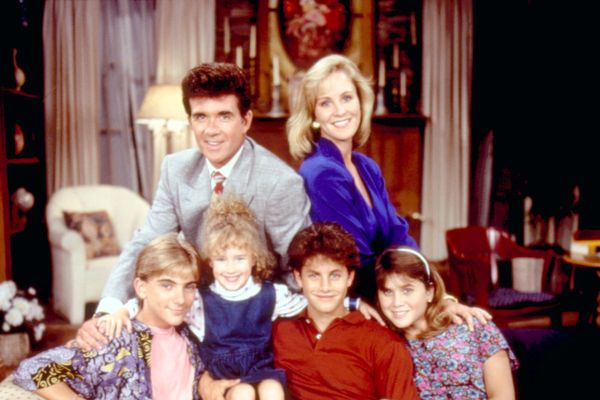