Nearly every world culture enjoys some celebration, or holiday that is set aside for giving thanks. Gratitude is a wonderful thing. However, it’s only in the USA where we send gridiron warriors to work on the holiday, watch a parade sponsored by one of the world’s greatest department store retailers and get down on some serious TV episodes the week prior, prepping us all for the holiday. Thanksgiving is awesome, and the TV shows that honor the tradition and American culture are much appreciated. Here are 10 of the greatest Thanksgiving themed TV episodes.

10. The Brady Bunch, “The Underground Movie”

The Brandy Bunch Thanksgiving episode from the second season deserves a special place in history because it milked more out of the Thanksgiving comedy than had been done before. Sure, there had been television episodes featuring the holiday, and gathering around tables to break bread, but the Brady’s added a new element to the traditional storyline: a school project. The school project was that of Greg’s, and his idea was to make a home movie that featured his family as the early settling pilgrims after their journey across the pond. As often occurred in the Brady blended family, too many ideas needed sifting, and it came to a head when Greg offered an ultimatum. Regarding the situational comedy of the entire series, this was one of the better comedy of errors episodes, still holding up to this day.

9. Full House, “The Miracle of Thanksgiving”

Full House lovers, the first season of the show struggled…it’s something we all have to admit. However, the Thanksgiving episode was the first dip into legitimate universality that may have salvaged the show for a second season pick-up. Before Thanksgiving, there was a real ho-hum behind the “death of Pam” character, and no one could really relate. Getting to Thanksgiving allowed the family to struggle with their loss–through the traditional Tanner comedy of errors–and also allowed the audience to care about the characters for the first time. It was their first holiday without “mom,” and the burden was heavy. Add to it a pre-teen trying her hardest to make the perfect Thanksgiving dinner to make her late mother proud, and there was something sweet in the excessive sentimentality.

8. One Tree Hill, “Between Raising Hell and Amazing Grace”

We must recognize all of the One Tree Hill faithful. This show enjoyed an impressive run, mostly because of a loyal fan base, and of course writers who offered that fan base a delightful romp on the most thankful of holidays. Yes, they went pretty formulaic with the storyline and the Thanksgiving that is ruined because something goes wrong in the oven, forcing Thanksgiving hosts to become Thanksgiving guests, and then the overcrowding awkwardness ensues. Parenthood did this to perfection a few years ago as well. The difference between most other shows where Thanksgiving goes wrong, and One Tree Hill…? Everyone on One Tree Hill is so damn good looking. If ever there were a show made for people who liked TV drama but had no sense of hearing, it was this one. This episode surely maintains that standard.

“Callllliiifornnniiiaaa…here we cooooommmeee!!!” Ah, The O.C….that delightful show that was actually shot in Los Angeles County. Fair enough, the dividing line is invisible, and the Greater Los Angeles area just has that vibe. And in California, especially Orange County, Thanksgiving can be more of an outdoor affair. For the writers of The O.C., they outdid themselves with this particular episode: it’s definitely in the Top 3 of the entire series. And it’s further proof that all people who write for TV must have had the strangest, most screwed up Thanksgivings ever. This particular episode was entitled, “Homecoming,” and it featured Seth’s “must choose” moment–aka Anna and that girl from Hart of Dixie, right…or Summer. Splitting the story, Ryan and Marissa venture east to Chino in order to visit Trey and chaos ensues.

Modern Family brings the comedy of errors from week to week, massage it into a nice ball of “What!?” then slice it with a razor’s edge. This show is sharp, witty, possesses a great family dynamic and delivers during every holiday episode. Case in point: “Punkin Chunkin” from Season 3. As we’re all well aware, Season 3 of any long-running series is the best season, and though Modern Family has ventured into Thanksgiving territory again, “Punkin Chunkin” is the one you need to find and watch…if you haven’t seen it. The back and forth between Mitchell and Cameron about punkin chunkin is laugh out loud funny, and the centerpiece prepared by precious Manny is a travesty. Not to spoil all elements of the multiple storylines we get from week to week, this one is definitely worth finding online.

5. Grey’s Anatomy, “Thanks for the Memories”

And from comedy to drama. No episode of Grey’s Anatomy really needs much of a set-up, does it? Insert Thanksgiving into the storyline, and you’ve got instant drama because this holiday seems to be associated with crazy relatives, and mishaps from coast to coast. They stay the course on Grey’s Anatomy and insert a dash of “comedy of errors” into the turkey roasting process, and with it being in Season 2, all of our favorites are in the mix. Of course, there is relational drama, and people not seeing eye to eye, and quality performances and…The episode of which we speak is none other than “Thanks For The Memories.” Sweet Izzie hosts the annual dinner, and she learns how to properly prepare a turkey (don’t you love how in all these shows, roasting a turkey is the hardest thing in the world?) and she pulls it off.

The love/hate relationship with Trey Parker and Matt Stone. Is nothing sacred to these guys? No. Exactly. That’s kind of the point to everything they do. That said, if you’re beaten and dying on a sidewalk, these guys will put on their Good Samaritan hats, and rush to your aid. Back to the show: they have ventured into the realm of Thanksgiving more than once, but there is a particular gem entitled, “Helen Keller! The Musical.” Set your sensitivities aside. This episode is found in the fourth season and features the South Park gang rehearsing The Miracle Worker for their school’s Thanksgiving Extravaganza. As you might suspect, Timmy has landed the lead role of Helen Keller, and in the process, he falls in love with a developmentally challenged turkey he names Gobbles. This episode is so wrong it doesn’t get more right.

What could be better for Thanksgiving than a show about nothing? Then take that show, which is set in New York, and imagine all the zany things these zany characters could do in such an iconic Thanksgiving city…? Yes, this is the episode where Jerry accidentally jacks one of the floats from the Macy’s Thanksgiving Day Parade. And Kramer gets the nosebleeds. And Jerry’s parents screw things up for him, yet again. Thinking hard about it, this was one of the stranger episodes of the show. No, not series finale strange, rather “I’m not quite sure where they’re going with this one” strange. Regardless, it somehow delivers. If you’re dusting off your old VHS collection, you’ll find this episode in Season 6, entitled, “The Mom & Pop Store.” Props to Jerry for getting a homage to Midnight Cowboy in the mix.

OK, TV writers. Pay close mind, here. This is how you do a comedy of errors for Thanksgiving. Gotta love what they’re doing on Brooklyn Nine-Nine, and for those who haven’t become fans of the show, the Thanksgiving episode may be the perfect evangelistic tool of conversion. It completely delivers. This episode features Amy preparing a Thanksgiving feast for everyone at the precinct, but everyone enters the scene with their own mindset, and like all Thanksgiving episodes must, everything goes south. Of course, everyone is game to have a good time at Amy’s party but very few people show up–all the principal characters–and Amy’s expectations make for a more stressful environment. Completely formulaic, but totally fresh. Kudos to Brooklyn Nine-Nine.

Which way do we go? It’s darn near impossible to beat “The One With All The Thanksgivings” because we get the lowdown on so much of the Friends history; however, jumping into Season 8, Brad Pitt made a guest appearance in “The One With the Rumor” as a Thanksgiving guest who hated Rachel–while he was married to Jennifer Aniston, of course. Both of these episodes are worth watching this Thanksgiving, and both being 22 minutes in length mean you can watch them while prepping the real cranberry sauce on the stove top. Delight. In the first mentioned, the cast remembers all of their worst Thanksgivings, and it features some wonderful, retrofitted moments for fans of the show. Going back to re-watch these, they are two of the most charming episodes from the series. And the play on Brad Pitt’s hotness in Season 8? Well played, writers. 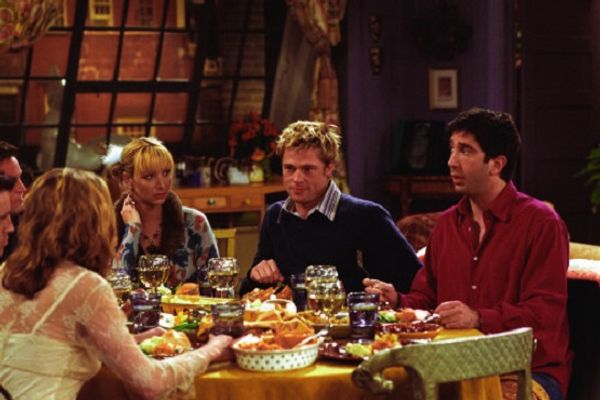