10 Reasons Amy Schumer Is Our BFF

Amy Schumer is having a moment. The 34-year-old comedian, actress and writer has become America’s irreverent sweetheart, and we couldn’t be happier. Trainwreck, the Judd Apatow-directed movie that she wrote and starred in comes out this weekend, and reviews are strong: the flick has garnered an 88% Rotten Tomatoes score, with critics calling it both funny and bold. “[Schumer] takes the romantic-comedy heroine and the onscreen treatment of feminism to places they’ve seldom, if ever, been before,” writes Dana Stevens of Slate. We’re running off to the movie theater, but first, here are 10 reasons why we’d love to call Amy Schumer our BFF:

Amy often jokes about how her body doesn’t fit the typical Hollywood standard, but her message is clear: if you don’t like it, f–k off. In her hilarious and inappropriate acceptance speech at the Glamour Women of the Year Awards earlier this year, she told the audience, “I’m like 160 pounds right now, and I can catch a d–k whenever I want, and that’s the truth,” as they erupted in wild applause. She also slammed women’s magazines for making you feel “bad for just being born with a p—y.” She later reflected on her speech to Glamour, saying: “I’m proud of what I said. I think it’s good to see somebody saying: I have a belly. And I have cellulite. And I still deserve love. And to catch the old D. And to not apologize.” Instead of feeling bad about our bodies, we should take a page from Amy’s book, try on some confidence and give the finger to everyone who’s not on board with our awesomeness.

While so many celebrities (Katy Perry, Taylor Swift, Shailene Woodley, etc.) have been afraid to call themselves feminists, Amy embraces the word and isn’t afraid to talk about it. “I don’t try to be feminist. I just am,” she said in a Q&A with Glamour. “It’s innately inside me. I have no interest in trying to be the perfect feminist, but I do believe feminists are in good hands with me.” Amy isn’t afraid to call out sexism, either. “Growing up, it’s just in your day to day,”she explained. “There are all these preconceived notions of what it means to be a woman or a girl, and straying from those ideas of femininity is sort of shocking to people. I felt angered by that as a kid. I felt like that was unjust. Like that was not right.” On each episode of her Comedy Central show Inside Amy Schumer, she explores and skewers these ideas while also being hilarious.

Amy isn’t just starring in Trainwreck — she wrote the screenplay, too. “It’s a story about a girl whose behavior is catching up with her, and it’s not cute anymore,” Amy said in an interview with Refinery29. “And, I say that and I think, well that doesn’t sound very funny.” But it’s something people should be able to relate to: “I think everyone is partially a trainwreck. I’m just for some reason more willing to share that with everybody. It’s a way more vulnerable side of me than people have seen,” she said. By writing the script, she was also able to write roles specifically for other funny women she knew. “I have a lot of really hilarious women I’m close to, and I wanted to write them roles the way I thought would best showcase what they do,” she said. “I need to do my best to facilitate them showcasing how hilarious they are, trying to find their specific voice rather than trying to fit them into an idea.”

7. She Loves Her Sister

Amy has often talked about her close relationship with her sister Kim, a comedy writer. In an interview with the Denver Post, she explained that she asked Judd Apatow to let Kim come to the set of Trainwreck and help with the movie as a producer; Amy also gave Kim a job as an assistant on season one of Inside Amy Schumer and upped her to writer on season two. Amy says that Kim is the person who makes her laugh the most. “She’s a total monster. Yeah, she just kills me,” Amy said. “We make each other laugh so hard. On the crew of my TV show there’s this guy I had such a crush on and he just wouldn’t even look at me. It was just blinders. My sister knows this. So one day, Kim’s like ‘Omigod, he’s looking at you.’ And I’m like, ‘Really?’ And I turn about and he’s sleeping on all the equipment. He was out. Not only was he not looking at me, he was sleeping on the job. I give it right back to her. Whenever she’s picking up her dog’s crap, I’ll take a picture while she’s not paying attention and post it.” For more of the Amy/Kim relationship, you can check out Amy’s Instagram.

Speaking of Instagram, have you checked out Amy’s feed? She posts some backstage and red-carpet type photos so that we can drool over her awesome dresses, but unlike many female celebrities, Amy isn’t afraid to post things that are candid and un-glamorous. The mix makes us keep rooting for Amy for sure, and we love her funny captions, such as when she recently thanked someone for her red-carpet side-boob. You really get a sense of her personality and life — check it out!

5. She Waited Tables Before She Got Famous

Amy’s one of the biggest stars in Hollywood right now, but she didn’t get there quickly or easily — she worked for it. After graduating from college, she told Backstage that she waited tables “at every single restaurant in New York City” and went on endless auditions. Then she decided to try stand-up comedy. “I did whatever I had to do to get stage time. I did a million open mics. I was even one of those people that stand on the street and say, ‘Do you want to see a comedy show?’ If you brought in five people, they’d let you perform. I’m really not a hard worker across the board, but when it comes to acting and comedy, I work my a– off.” After tons of stand-up and acting classes, she got on NBC’s Last Comic Standing, which launched her career — but it was a long road getting there.

4. She Wants To Be a Mentor and a Trailblazer

As a woman in comedy, Amy knows that she has a lot of responsibility to pave the way for more women. “There’s a responsibility, in a way,” she told Backstage. “I’m so grateful for the women that I watched when I was younger—Carol Burnett, Shirley Temple, Gilda Radner, Whoopi Goldberg—and I feel like I can be one of those women,” she says. “Because if I don’t, then who’s supposed to?” If you want to follow in Amy’s footsteps, she told the Denver Post about what she looks for in younger comedians: “Someone who’s a hard worker, who loves comedy and has a respect for it,” she said. “There’s such a strange entitlement with a lot of comedians and actors — and jealousy — but then you run into some people and you can just see something in them where you feel connected.”

3. She Played Gretl in The Sound of Music

Amy’s been acting since she was a kid — can you imagine how adorable she must have been when, at age 5, she played Gretl in a production of The Sound of Music? Audiences laughed at her, and that may been a formative experience that launched her toward her career in comedy. “Even when I was trying to be dramatic, people would laugh,” she said in her interview with Backstage. “It would make me so mad. I couldn’t understand why they were laughing at me. One day the director pulled me aside and said, ‘Why are you so upset by that? That means they love you and they’re enjoying watching you!’” Amy, who majored in theater in college, is still part of a theater collective in New York. Although she hasn’t done a play in a while, she says theater will always be one of her big loves.

“On both my father’s side and mother’s side, my aunts are really bad people,” she said. “They all have personality disorders and I don’t trust them. I have a serious phobia of aunts. I’ve never met an aunt of anyone’s that I’ve trusted. My brother and sister both know that if they have kids, I will cut them out of my life, because technically I will be an aunt.” We get it, girl. Aunts can be terrifying. Is the “cool aunt” a myth? It just might be — and Amy is shining a light on this secret phenomenon.

1. She Was Once a Toe Model

Okay, this one sounds like she’s making it up, but Amy told Buzzfeed that she once got work as a toe model. Not even a whole foot model. “Just my toes, and only on one foot, because s—t kind of hits the fan once you got past the toes on my feet,” she explained. “But my toes are beautiful, in perfect order. I was sleeping on the beach, because that’s where I was living at the time, and someone walked up and said, ‘What are these?’ And they took all the newspaper off my body and they saw my face, so they were like, ‘No, just the toes.’ By the end, my day rate was $2,500, but they usually only needed one picture. It was per toe.” We’re not sure if we believe her, but that’s another thing we love about Amy — girl can tell a story! 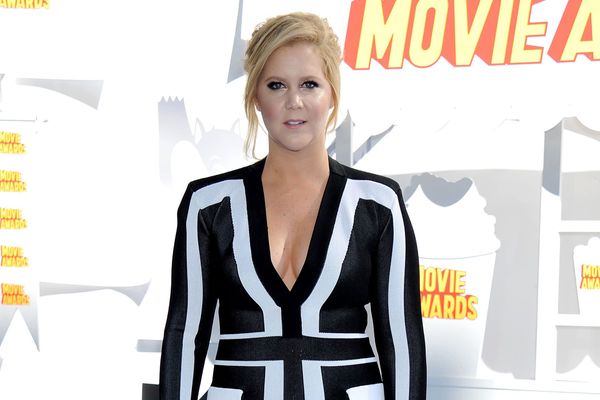