Tom Hardy: get ready for some serious Oscar chatter regarding his role in Brian Helgeland’s Legend. We’re gonna stay ahead of the curve on this one and allow the buzz to begin. Yeah, Tom was a hot headline just a week ago due to some silliness at Toronto International Film Fest. Sadly, it detracted from how awesome he is in this film, playing twin brothers, Reggie and Ron Kray. Fortunately, everyone will see for themselves as the film hits theaters on October 2nd. Tom Hardy is totally awesome and here are 10 of the hundreds of reasons why.

10. In Band of Brothers… You Could Just Tell

Remember Tom Hardy in Band of Brothers? What? You haven’t seen Band of Brothers? You don’t dig on war movies and TV shows? Here’s the deal. There has never been anything war related that compares to Band of Brothers. If you’re a Tom Hardy fan, you must see Band of Brothers. Tom played Private John Janovec in two episodes of the award-winning miniseries, and it served as his first on screen role. When he’s on screen… it’s obvious. This kid has “it.” He’s electric. That role also proved that he looked damn good in a uniform. It thrust him into another well-received military conflict film: Black Hawk Down. There’s just something about Tom Hardy in the throes of violence. He does it is so well. But we’ll get to that momentarily.

Tom thrives during interviews, but he will not censor himself, nor will he indulge in lines of questioning that are obtuse. Case in point, the most recent incident at the Toronto International Film Festival and a poor, agenda-based question regarding sexuality, that somehow became about Tom’s sexuality. To begin, the question was never well-formed. And Tom being Tom, offered very little patience for the topic, or the individual attempting to lead it. It’s not the first time Tom has shut down a journalist/blogger for asking a question he wasn’t fond of, and it won’t be the last. That’s not out of the ordinary. What is out of the ordinary: Tom offers an exceptional amount of grace in his rejections. He’s not hateful, nor does he shamelessly attempt to embarrass anyone. Other celebrities should take note.

8. He Revels in Being Underrated

Character actors are always well known by the film and TV buffs who love trivia stemming from who played what, but how is it possible that Tom Hardy continues to fly below the radar? How is he not a household name like Brad Pitt? The answer is quite simple: he doesn’t pursue fame, rather he pursues work. And to that end, he pursues intriguing roles and projects, not always starring roles. When there’s something he likes, he gets on with it. Obsessing about press and media coverage is not something he cares about. He’s one of the few people who have a body of work that truly speaks for itself. An example: has he ever appeared in something, and not delivered a stellar performance? He never settles for phoning it in — tossing out some personality-performance that looks like something he’s done before. Nope. He’s too awesome for that.

Tom Hardy is unrecognizable in many of his roles. The roles in which he actually looks most like himself (Inception), he’s most unrecognizable. In a fashion similar to his most recent film, Legend, the name “Tom Hardy” stirs more lore, legend and myth than his face — a very rare quality. This is the mark of a true character actor, and yet this character actor has the qualities of a leading man. Tom disappears into his roles, and he’s proved it time and time again. From a wiry thin soldier in Band of Brothers, to a beefed up, hardened criminal in Bronson, to Ivan Locke in Locke, sitting in a car for the entire film and completely able to hold your attention. What? How? Come on. That kind of charisma is a little unfair to the rest of humanity. That stated, we’re all thrilled that he wields the sword skillfully.

6. People Name Plants After Him

People love Tom Hardy to such a degree, they name plants after him. And it’s not only plants, people name pets after him, too. He’s that much of a comforting entity. Every room and every life is a little better and brighter when there’s a little more Tom Hardy. “How’s Tom Hardy today?” “Did you water Tom Hardy today?” “Tom looks a little sad, we should put him in the sunshine.” “I think I’m gonna take Tom Hardy home tonight, and give him some special attention.” And for pets… who wouldn’t want to take a long walk with Tom Hardy, and have Tom be just as we all imagine: the greatest friend… ever! Tom is that guy whose movies and TV shows you love, and yet you imagine having a romance or bromance with the guy, just to score a little of that Hardy mojo.

Digging back into the legitimate skill set of Mr. Hardy, there’s something quite fascinating about his physicality. It’s not merely the fact he can manipulate his weight to reflect a variety of character types, but the fact that he can carry himself to create character types. Tom is 5’9″, which is average height for men worldwide… allegedly. However, Tom has been toe toe with actors well over 6’2″ in height, and looks much larger. Sure, you can toss lifts into an individual’s shoes, and yes, there are a host of tricks that can be used for practical effects in camera, but there is something more to Tom’s ability. He literally comes across — even in interviews, when he’s in his casual daily wear — as being so much larger than he actually is. What are we to take from this? He has the ability to totally manipulate reality… actuality… perception.

4. He Was Bane and Bronson

Let’s stay in the realm of size and strength for another moment. Tom Hardy has played two of the baddest, bada– villains ever put on the big screen. One, a real-life, tough as nails prisoner, Charles Bronson… and Bane, one of the few villains able to stand toe to toe with Batman and deliver a serious beat down. These are two roles that really mess with your mind as an audience member, because in some strange way, the sympathy Tom offers these characters has you rooting for them, before reminding yourself, “Oh yeah, they’re the bad guys.” At the very least, you’re offering respect, and possibly some weird admiration for their badassery. This isn’t to detract from Tom’s ability to play a badass good guy (Warrior). He’s a guy who can play hero and villain and antihero to perfect pitch. It’s more freaking awesomeness.

Tom has a few ideas about British TV and bringing it to new heights. Seriously, he does. Here’s some proof in the pudding that many people may not be aware of, unless you’re the biggest of Tom Hardy fans. Yes, we can boldly state that this information came straight from Tom’s mouth (and some cross-referencing with industry sources and IMDb). He’s presently working on a new television series for British TV (Taboo) that is in pre-production. Tom is serving as an executive producer, will act in the project and — coolest aspect of it all — he’s collaborating with his father, Edward “Chips” Hardy. His pops has done a lot of the historical research, and is functioning as a consulting producer and story writer on the series. There was no mistaking Tom’s affection for this project, and how cool he thinks it is to be working with his dad.

What is it about Tom Hardy that makes violence so becoming? There are several scenes in many of his films that involve him beating the life out of individuals. When you watch these things occur in other films, does it not seem a little harder to watch? Why is it so supremely entertaining when Tom is laying the smack down? There are several scenes of savagery in Legend, and they’re most often met with dark laughter along with the audience Ooos and Ohhhs. Is it the fact that Tom is so athletic and efficient in offering the beat down that it is enjoyable to watch? When he’s playing hero, it’s easy to root for him, but it seems just as easy to root for the guy when he’s playing a villain.

1. He’ll Win An Oscar For Legend

There is little doubt that Tom will scoop up some serious hardware for his performances in Legend. In playing Reggie and Ron Kray, Tom will likely be nominated for awards in multiple categories (Best Actor, Best Supporting Actor) when the season rolls around. Of course, there will be other stellar performances strewn from now ’til then, but the release of Legend in early October is for a singular reason: beat others to the buzz. We shouldn’t be surprised if the legend of Tom Hardy grows exponentially after this one is all said and done. Could he win two Oscars? Oh, geez. While improbable, he would be the one to do it, and he would be the one actor that all other actors wouldn’t hate for doing it. In terms of taking two awards in the same show, the best money would be at The SAG Awards. 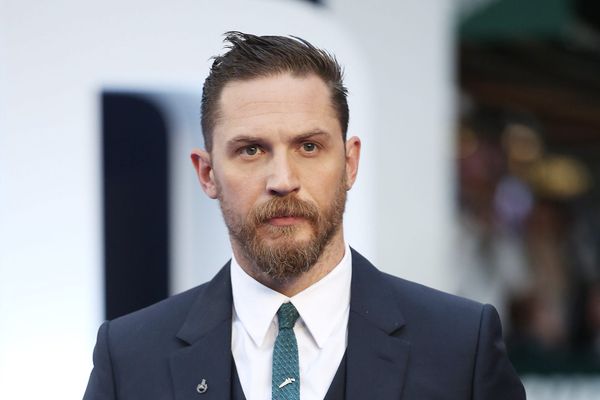