10 Things We Miss About Smallville

The Superhero craze has taken over both television and film in recent years, but 17 years ago creators Alfred Gough and Miles Millar hit on television gold by bringing to life the coming-of-age story of Superman himself, Clark Kent. Smallville won 3 Primetime Emmys as well as several other awards, and for good reason — it was fantastic. Although fans weren’t as enthused with the later seasons as they were with the beginning, the show held a major fanbase for ten seasons before ending on May 13, 2011. The show took us right from the beginning in the pilot when baby Kal-El lands on Earth before quickly jumping to teenage Clark played by Tom Welling, who begins to deal with controlling his powers, befriending Lex Luthor and falling in love with Lana Lang. There’s a lot to miss from this iconic show, but here are 10 things we miss the most about Smallville.

10. The Town Of Smallville

The story of Superman is a well-known one and until Smallville his identity as Clark Kent wasn’t given the full shake it deserves. While everyone knows Clark as the mild-mannered, bumbling reporter of “The Daily Planet” in Metropolis, he has his roots in Smallville as a corn-fed farmboy. Smallville was the perfect backdrop for the awkward teenage Clark who just wanted to fit in, date Lana Lang and help his parents Jonathan and Martha who were expertly portrayed by John Schneider and Annette O’Toole.

You couldn’t help but love Smallville as its quaintness and small-town life was disrupted again and again by kryptonite infections and a young man learning to be a superhero in their midst. All these years later, the origin story is being tried out yet again with Superman’s fellow Justice League member Batman in Gotham, a show that is also already very successful, thanks in part to the previous success of this show.

Another great thing about having the show’s basis in Smallville is learning more about Clark Kent as a teenager before his friends were just other superheroes and Lois Lane. Pete Ross played by Sam Jones III and Chloe Sullivan played by Allison Mack were great friends to Clark and essential to his high-school story, helping him solve the mysteries plaguing the town and the people as the three worked on the “Smallville Torch” newspaper.

We even miss the teen drama that plagues superheroes as well, which was also edged along by Pete and Chloe. Pete hid his feelings for Chloe for a long time while she was busy obsessing over Clark who was completely oblivious to her love because of his yearning for Lana. Eventually, both friends learn Clark’s big secret and while Pete left in season three, he did come back with powers in season seven before taking his final leave from the show, and Chloe stuck it out right through season ten.

Clark Kent sure has a thing for girls with the initials L.L. While Superman fans are well aware of the relationship between Clark/Superman and Lois Lane, before all that, however, was Lana Lang. Smallville catapulted Kristin Kreuk into stardom as the main love interest of Clark for many seasons before Lois was even introduced. While the back and forth of Clark and Lana’s relationship became redundant, Lang’s character developed further and further into the story, growing her out of simply being Clark’s beautiful high school love interest.

After so many years of watching Clark being completely in love with her, and the two finally being together, Lana marrying Lex was absolutely astounding. Unlike many other teen dramas, the growth of characters like Lana not only added value to the storylines but also helped captivate audiences of many ages.

With Batman v Superman introducing fans to Jesse Eisenberg as Superman’s arch nemesis Lex Luthor, to many he will have to hit the high standard set by Michael Rosenbaum’s take on the iconic character in Smallville. The show blew open the enemy dynamic between Clark/Superman and Lex by beginning their story as friends and Lex as even a caring and honest man. His obsession with the meteor shower due to its impact on his own life when he was only a child is the beginning of a rift between the two, leading Lex into his fated evil role.

One of the most interesting thing about Lex’s role in Smallville was his uncanny ability to be everywhere all the time. Lex Luthor would consistently pop out of the woodwork any time he wasn’t expected, leading to his suspicions constantly being raised about his friend Clark and increasingly hostile interactions between the two.

The Talon was the ultimate hangout in Smallville and we as fans miss all of the things that occurred at that spot. After drama surrounding Lex’s ownership of the cafe, The Talon quickly became the town’s favorite after-school hangout spot, which of course meant a central location for much of the activity in all ten seasons.

Clark got his first job there, he and Chloe had a steamy make-out session under the influence of Red Kryptonite and of course were caught by Lana and in the end after nine seasons The Talon was destroyed, paralleling the end of the show. Much like Karen’s Cafe in One Tree Hill and Central Perk in Friends, The Talon was a staple for the beloved show and is missed just as much as our favorite characters who frequented it.

After the Lana-Clark relationship that was dragged out for several seasons and grew tedious for fans, we were all relieved by the entrance of Lois Lane played by Erica Durance. Unlike the more timid and flaky Lana, Lois was a tough, opinionated and stubborn match for Clark as soon as she stepped onto the scene in season four and exactly what we as fans loved and now miss. Watching the two start out constantly arguing, trading sarcastic comments and generally frustrating each other not only added much-appreciated humor, but also made us thoroughly believe in their connection.

While Lois could have had a spot all her own on this list, her role in Clark’s life from his high-school years to them living and working together in Metropolis is paramount to Smallville‘s entire story of Clark evolving into Superman. We miss them, we miss her, and we miss the show.

Everyone loved and appreciated Clark Kent as the polite, respectful farm-boy, but it was definitely satisfying when he finally let loose and let out some of the teenage angst and rebellion that affects everyone, even superheroes in the making. In season two Smallville High School’s class rings were made with red kryptonite resulting in an episode where Clark talks back, goes to the bar, asks Lana out and even uses his x-ray vision to check out the girls. In a later episode, Pete purposely exposes Clark to the rock in order for him to have some fun along with Pete and Chloe who were infected with the parasite, ending in a hot make-out between Chloe and Clark.

As fans of the show, seeing Tom Welling take a different arc on the character was crucial and breathed life into the redundancy of good-guy Clark Kent. The “Dark Clark” storyline was brought in through several of the seasons to liven things up and, while we love Clark, no-one can resist a bad-boy sometimes and we miss that thrill in the show.

3. Formation Of The Justice League

During the beginning of the show fans were told that you would never see Clark Kent fly as Superman, but after the departure of Gough and Millar as showrunners after season seven, fans got their wish and a whole lot more. Throughout the series Clark had encountered several others with super powers, some being some of the famous faces in DC comic’s Justice League, and the show went from origin story to full superhero base when it pulled the crew together, making their first official appearance in season six.

While we all enjoyed the growth of Clark and the origin story, we couldn’t say we were not thrilled by the formation of the Justice League, even if we started to enjoy the series less and less.

The best thing about Smallville was the originality behind a newly kryptonite infected Smallville resident for every episode. This not only helped Clark learn more about his powers and give us a glimpse of his abilities while he remained Clark Kent, it made the show really fun! The first couple of seasons remain the best thanks to Gough and Millar’s one villain per episode device in which we saw some crazy stuff happening to a lot of the students and staff at Smallville High.

Yes, we were enthusiastic about the hero aspect when it came around with costumes and everything, but we definitely miss the t-shirt and jeans wearing Clark and the average person becoming some a kryptonite villain in Smallville. It may have gone for ten seasons but we all still remember episode two where insect obsessed teen Greg Arkin turns into an insect and kidnaps Lana, leaving Clark to come to the rescue, which says something for those storyline’s influence on the entire show.

It takes a lot to cast Superman perfectly but to find the right guy to accurately portray awkward 14-year old Clark Kent all the way into adult life as Superman is a totally different story, but did they ever make the right decision in Tom Welling. Welling was 24 at the time he was playing 14-year old Clark but it made no difference because of the honest charm he brought to the character. Much like Christopher Reeve’s ability to convince us of his bumbling nature while all the while we knew the superhero was inside, Welling had the same effect in Smallville. He could go from a tongue-tied lovestruck teenager to a strong and dependable hero in moments.

We miss a lot about the show and a lot of the actor’s takes on their characters, but what we miss most was the consistency Welling brought to his role as Clark Kent/Superman. What makes it harder is that Welling did not go on to mega-stardom, leaving us to watch re-runs of Smallville anytime we’re feeling a little depressed he’s not on our screens. 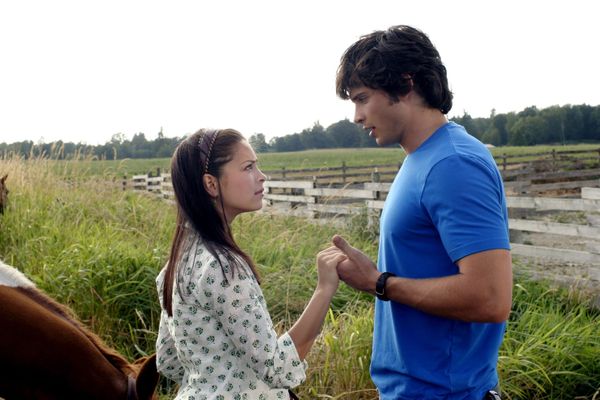