It has been a long time since we took a journey down the halls of Bayside High with the best group of high school friends anyone could ever want. Long before high school drama started to look like One Tree Hill, Gossip Girl or The O.C. we had Saved by the Bell, where the biggest problems were lying to your parents and taking caffeine pills. Saved by the Bell ran for four seasons from 1989-1993 and, of course, one additional season of Saved by the Bell: The College Years. And while we will take any opportunity to watch re-runs or tune in on Netflix, it wasn’t until Jimmy Fallon brought most of the gang back for a reunion did we realize how much we miss it. So take a trip down memory lane with the things we missed about Saved by the Bell.

Kelly Kapowski, who was played by Tiffani Thiessen, always had the best style on Saved By The Bell, which is definitely something we miss about the show! The early ’90s were a key time for cropped tops, high-waisted pants, and Dr. Martens, which are all trends that have recently come back into style. It’s fun watching the show back and seeing how cyclical fashion can be!

Saved By The Bell had quite a few guest stars during its four-season run! Many of them would later go on to be huge stars, so it’s interesting to watch the series back and see them back in the Saved By The Bell days. Eric Dane, whom you probably know best as Grey’s Anatomy‘s Dr. Mark Sloan, appeared in a 1991 episode as a volleyball opponent at the Malibu Sands Beach Club. Denise Richards is another popular actor who also made an appearance at the Malibu Sands Beach Club. Other stars including Tori Spelling, Christine Taylor, Scott Wolf, and Leah Remini also had guest roles on the show.

Without a doubt growing up in the ’90s was great and if you were a ’90s kid you were especially privy to the excellent theme song choices for shows at the time. Friends, Fresh Prince of Bel-Air and, of course, Saved by the Bell have some of the most recognizable theme songs that even to this day you can probably still sing off the top of your head with no background music. “Saved by the Bell” the song was so catchy and quick you couldn’t help singing along with lyrics: ” if the teacher pops a test, I know I’m in a mess and my dog ate all my homework last night.” Sure you probably didn’t love going to school but you also probably couldn’t wait to watch the school-time adventures of Zack and the gang which all began with this memorable tune.

Each character had their own comedic chops but without a doubt, Dustin Diamond’s character of Screech was present for fueling the humor of the show. Put aside all the horrible things Diamond has since said about the show and the odd things he has also been involved in since and remember all the great Screech lines that we got from the show. Whether chatting with Zack or yearning after Lisa Turtle, Samuel ‘Screech’ Powers definitely walked to the beat of his own drum and sometimes he was perfectly aware of his awesome awkwardness.

Since Jessie is such an independent feminist it is kind of odd that she would go out with a meathead like A.C. Slater in the first place, but her constantly calling him a pig was just one of the best things about their relationship. While Slater (Mario Lopez) had the looks and muscles to charm all the girls, he really only had eyes for Jessie (Elizabeth Berkley) and she had no problem putting him in his place. Although they were on-again, off-again, Jessie and Slater were the most stable couple in the midst of the dramatic relationship of Zack and Kelly and the non-relationship of Lisa and Screech. They may have frustrated each other to no end but they were adorable and, of course, hilarious to watch together.

The 90’s version of One Tree Hill’s Brooke Davis, Lisa Turtle had one of the best roles in the show. Even though the role was initially written to be a Jewish girl from Long Island, Lark Voorhies did the part so well producers changed the character for her and we can see why. Lisa Turtle may have been the “rich, daddy’s girl” but she rocked the part so well that we loved her rather than found her annoying. Her unending confidence matched with her unbelievable sass made her a role model to all girls who would much rather be independent than chase boys around, although she did have some love interests on the show. I mean, she could have been a little nicer to poor Screech but he was relentless and let’s not forget when she finally agreed to go to prom with him, he dumped her, much to her horror and dismay.

No, we are most definitely not talking about the atrocity that was Lifetime’s “The Unauthorized Saved by the Bell Story,” we are talking about the TV Movie spin-offs that occurred from the show’s storylines. Saved by the Bell: Hawaiian Style (1992) took the gang on a beautiful vacation to Kelly’s grandfather’s Hideaway Hotel in Hawaii where they run into none other than Beldin. Zack falls in love (again) and they, of course, have to work together to ensure the right thing is done. Then there is the movie that ended the whole thing, 1994’s Saved by the Bell: Wedding in Las Vegas where, Zack Morris and Kelly Kapowski finally tie the knot, but not without overcoming some obstacles first.

Okay, time out! We miss this about the show because it was one of the instances where the show realized itself and broke the Fourth Wall as the whole scene would freeze while Zack spoke directly to the audience. It was entertaining because the rest of the characters wouldn’t even flinch while Zack either explained something or more often than not came up with a devious plan in true Zack Morris fashion. His narrations were also great because they allowed us to know exactly what Zack felt or was thinking in a moment where he maybe had to play it cool and gave us his real opinion about something usually related to Kelly or Slater. He would always restart the episode with a “Time-In,” sometimes having to completely remove himself from the scene, although no one ever questioned it.

Mr. Belding is the reason we are taught to know the difference between a principle and principal is to remember your princiPAL is your friend. Mr. Belding was expertly portrayed by Dennis Haskins as Bayside’s principal who is constantly hauling Zack into his office for his antics while also trying to be friends with the gang. Belding has a good heart and always does what he can to help and of course makes the cheesiest jokes that only he laughs at. The Belding laugh is ingrained in the minds of Saved by the Bell fans because in itself it is hilarious, even if his joke wasn’t and we also really miss his tagline “hey, hey, hey, hey, hey–what’s going on here?” Everything about Bayside was cooler than any other high school, right down to the leader of the whole school and Dennis Haskins’ dedication to his character through every season and spin-off makes us miss him that much more.

Most shows have a central hangout location that we come to love just as much as our favorite characters who frequent the place. Like Central Perk in Friends, Karen’s Cafe in One Tree Hill, The Peach Pit in Beverly Hills or The Talon in Smallville, the coolest place to hang out outside of school hours was The Max. We often saw the gang here all together which meant a lot of major events also occurred here, including dates, a lot of dancing (remember when Slater put on tights and did Ballet for Jessie in the episode “Breaking Up Is Hard to Undo” and of course where Kelly fell in love with her college-aged manager Jeff. Once again we miss Saved by the Bell because we had nowhere as cool as The Max to hang out. Come on, the owner was a freaking magician, it doesn’t get much better than that.

In short, we miss the simplicity of the show that managed to be entertaining without making the teenage generation look like the worst people on the planet. Although lying to your parents and taking caffeine pills shouldn’t be laughed off, we only can because “teenage issues” in today’s shows include sexual violence and cocaine addictions. Even though Jessie’s caffeine pill episode is joked about now, it is still a somber and serious moment in a light-hearted show, commenting on the pressures teenagers face and of course the power of friendship as she turns to Zack for help. While Saved by the Bell maybe wasn’t as gripping as other series, it still worked to teach lessons and was a lot of fun most of the time. In season 3, half the season is dedicated to the whole gang getting jobs at Malibu Sands beach club where Lisa’s parents are members. This storyline freshened up the show by not only getting the group out of the halls of Bayside but introducing new faces such as Leah Remini as Stacey Carosi, yet another love interest for Zack.

A lot of teenage romance stories grow old pretty quick with break ups and make ups but we couldn’t get enough of the relationship between Kelly Kapowski (Tiffani Amber Thiessen) and Zack Morris (Mark-Paul Gosselaar). Although we only had four seasons that was enough to see them fall in love, break up and date others, all the while knowing they should just be together. Thanks to both the brevity of the half-hour episodes and the short span of the show (only 4 seasons) plus the previously mentioned TV movies, we didn’t have to be too bogged down with drama as their relationships with others really only last one episode or so except for of course that skeezy Jeff who causes trouble for much of season 3. We knew for sure it was fate when Zack goes to great lengths in season 2, episode 1 to take Kelly to prom after she tells him she can’t go with him but not why–because her dad lost his job and she can’t afford the dress. Zack shows he really is a softie and, although he chases girls, he has true feelings for Kelly. 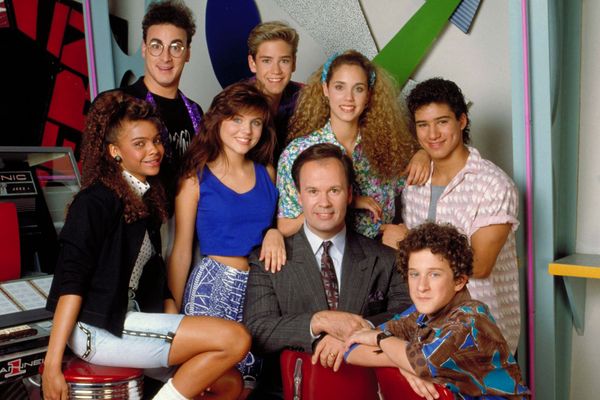 Things You Might Not Know About Saved By The Bell