Kat Dennings is one of those Hollywood stars who always remains on the outskirts of the spotlight despite her fame with roles in blockbuster movies such as Thor and hit TV series such as 2 Broke Girls. She is a self-proclaimed “weirdo” and is happy to explain why she doesn’t prescribe to the typical “celebrity” way of life which in itself has gained her millions of fans. On top of it all she is witty, hilarious, and very talented. Now that 2 Broke Girls is coming to an end, fans can’t wait to see where she ends up next but can only hope it is another big role somewhere. Here are 10 things you never knew about Kat Dennings:

When Dennings was still quite young and decided she wanted to act, her parents thought it was “the worst idea ever,” but they still supported their daughter and they all moved to L.A. in order for her to chase her dream. While Kat Dennings’ family may not have been thrilled when she decided she wanted to pursue acting as a career, but it didn’t take long for her big break. At only 14-years old, she landed a significant role in an episode of Sex and the City in which she played a rich Jewish girl who hires Kim Cattrall’s character to organise her million dollar bat mitzvah. Landing the role was the reason her family broke down and finally got cable, just so they could watch it. The most surprising thing of all about Dennings’ success is that she never took acting classes. “I took one acting class when I first started acting when I was 10. The guy who owned the school told me I would never be an actress and I should stop immediately. I deduced that he didn’t know what he was talking about and left.”

Like many actors and actress Kat Dennings does not go by her given name and instead adopted a stage name when she began her career. She was born Katherine Victoria Litwack, but when she decided to be an actress, she chose to change her name because as she says her entire name is “a little hideous.” She opted for Dennings because it is much more marketable for an actress.

Katherine Litwack was born on June 13, 1986 to Ellen and Gerald Litwack in Bryn Mawr, Pennsylvania, and was the youngest of five siblings. Her mother worked as a poet and speech therapist while her father was a molecular pharmacologist and college professor. Her family did not have a lot of money and she likens herself to Wednesday Addams and was a “dark and tortured” child growing up. “My parents were not so understanding of my melodrama (which I still maintain). There’s perhaps no more important time for kids to express all their strangeness and work through it than childhood and adolescence.” She added, “I lived in a nice house with a nice family in the woods. There were deer. There were no other neighbors. There was weather.”

To go along with her “unusual” childhood, Dennings had an interesting educational upbringing. In her whole life she has only had one half-day at a traditional school. She spent a half-day at Friends’ Central School and other than that was homeschooled for her entire education. The homeschooling meant that she pushed through all of her work and graduated high school at the age of 14, just before her acting career took off.

Kat Dennings is a talented actress, but she is also a passionate and talented writer. She runs her personal blog which always keeps fans entertained and back in 2008 a script she wrote ended up on a prestigious list of the best unproduced screenplays. Dennings co-wrote the script called “Your Dreams Suck” alongside her brother Geoffrey Litwack and although they ended up on the list, unlike some of the other scripts, a feature film was never made.

Like many celebrities, Dennings has never been very open about her personal life. In 2011-2012 the actress was rumored to be dating actor Nick Zano around the same time he guest starred on 2 Broke Girls. After a low-key breakup, Dennings then revealed she was in a relationship with singer Josh Groban in October 2014. The pair quickly became one of the entertainment industry’s cutest couples and even started gushing about each other in interviews, but in the summer of 2016 the pair called it quits after two years of dating.

Prior to 2 Broke Girls, Dennings was known for her smaller roles and parts in independent films and she eventually got so frustrated with it, she went mainstream. When asked what influenced her to agree to a weekly sitcom, the actress was candid. “To be honest, things were actually picking up. I was getting really exciting things, and Thor was just coming out, and I was doing really interesting projects, but I got to a point where I’ve worked really, really hard, and then they just disappear. Four months of you life never gets seen, and you start to feel tied. This came at the right time for me because I had just finished the most intense shoot of my life, in a really amazing way. […] And then, this literally fell into my lap. I was feeling like, ‘What do I do now? I can’t do another one of these films for a really long time. I want to do something where people will definitely see it because I’m a hard worker, and I want people to appreciate it.'” She added about landing the role of Max for the show, “It almost seemed like a gift, at just the right time. I was like. ‘God this is exactly the answer to everything I’ve been wanting.’ I’m just really lucky that this came along.”

While Kat Dennings may have felt she wasn’t getting the recognition for all her hard work by starring in indie films, her net worth hasn’t suffered. After starting out on Sex and the City, she went on to star in the short-lived series Raising Dad opposite Bob Saget and then appeared in films such as Raise Your Voice, The 40-Year-Old Virgin, The House Bunny and Thor: The Dark World. Of course she is best known for her role as Max Black in 2 Broke Girls and has made an estimated net worth of $8 million.

Kat Dennings is widely considered to be one of Hollywood’s most gorgeous people and has often found herself on the “sexiest” and “most beautiful” lists of various publications, but she has never given into the pressure to change herself in any way to be more attractive. “When I was younger there was a lot of discouraging talk: lose weight, color your hair, straighten your teeth, get a tan. But I’m a firm believer in everyone being born with what they need to be attractive. In all sorts of ways. And I don’t really feel like I want to change myself that much.” She also added, “I’ve had people tell me to get Mystic Tan, blonde highlights, choppy haircuts, but I’ve made the conscious decision not to cave.” 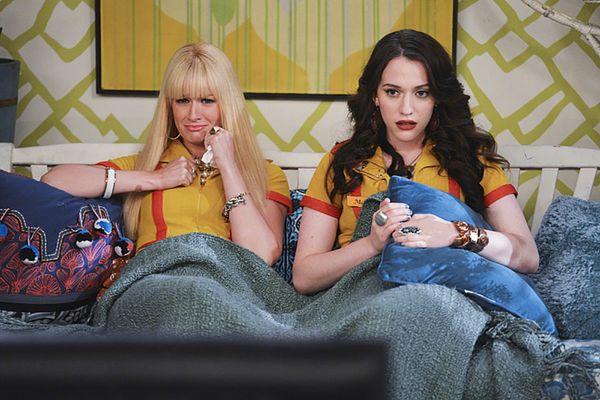 Cast Of 2 Broke Girls: How Much Are They Worth?