Adam Levine is one of the biggest pop stars in the world. He rose to fame as the lead vocalist of the three time Grammy Award-winning pop rock band, Maroon 5. He just recently received a star on the Hollywood walk of fame for his contribution to the music industry as a singer, songwriter, multi-instrumentalist and record producer. In addition to performing with his band, Levine is also well known for appearing as a coach on NBC’s reality talent show The Voice. The “Don’t Wanna Know” singer has a birthday coming up, so here’s a look at 10 things you probably didn’t know about him!

Adam Noah Levine was born on March 18, 1979 in Los Angeles, California to his parents, Patsy, an admissions counselor, and Frederic Levine, founder of the retail chain M. Fredric. His parents divorced when he was 7. Levine used to spend weekdays with his mother and weekends with his father. He grew up with two siblings, a brother named Michael and a sister, Julia, as well as a half-brother and sister, Sam and Liza.

Levine has Jewish ancestry on both sides of his family. His father and maternal grandfather were both Jewish, and although he used to consider himself Jewish, he more recently said that he rejects the idea of following one religion and chooses a “more generalized, spiritual way of life.” As a kid, he chose not to have a Bar Mitzvah.

The Voice coach started playing in a band back in 1994 when he co-founded the alternative band, Kara’s Flowers. Similar to Maroon 5, he was the lead singer and guitarist. All four members of the band met while attending Brentwood EMH School and became quite successful together. While performing at a house party in Malibu, they were discovered by a producer who was walking his dog outside the house, heard them playing and came inside to check them out. Not long after they performed on an episode of Beverly Hills, 90210 at the Peach Pit! After a lot of ups and downs, the band eventually morphed into Maroon 5 and in the process, kept three of the four original band members, Adam Levine, Mickey Madden and Jesse Carmichael.

In 2002, before he made it big as a musician, Adam Levine worked as a writer’s assistant for the popular sitcom, Judging Amy. The producer, Barbara Hall, was a family friend which is presumably how he got the job. While working on the show, he spent a lot of his time writing songs about his ex-girlfriend, Jane. These songs were used to create Maroon 5’s debut album, Songs About Jane — this was the album that made them famous. He worked as a waiter at the Johnny Rockets burger chain for exactly two weeks while he attended Five Towns College in Long Island, but dropped out of college after only one semester.

Adam was diagnosed with ADHD when he was a teenager. According to him, he wasn’t at all surprised by the diagnosis. “Throughout my life, I struggled with ADHD. I had the symptoms of ADHD…It was hard for me at times to sit down, focus and get school work done. I was frustrated because of the challenges I was having in school,” he said. It’s something he still struggles with today as an adult. “I continued to have difficult in the studio as I was trying to write new songs and focus on completing my work. On the first album, I remember very distinctly being stuck and not being able to focus. And I had 30 ideas floating through my mind and just couldn’t document them.” He takes medication to help control his disorder.

In an interview with Jimmy Kimmel, he shared a story about one of his experiences with prescription drugs. He used Ambien for the first time and was left unconscious for an hour. “[James Valentine and I] didn’t know what it was, so we figured we’d take it to sleep. We took it and we were at a Denny’s in some shady part of the city, and I’ll never forget this, because I ordered Moons Over Miami and we woke up, at the table, what must have been a hour later. We didn’t eat our food, we just paid our bill and sheepishly made our way out of there. Since then, I’ve never done drugs,” he said.

Adam Levine has been practicing yoga for over 10 years now. Initially he got into it to help with his flexibility issues, but now he’s a self-proclaimed yoga devotee. Before each and every show, Adam does at least an hour of yoga. “Playing a show before thousands of people is a highly unnatural state and when I get on the mat to do an hour of yoga before the show, I come out physically relaxed,” he said. He used to work out by lifting weights, but ever since he discovered yoga, he claims he’ll never lift another weight again. Weights made my neck thick, and I would be like, ‘I’m turning into a monster!’ Yoga takes what you have and molds and sculpts it, which is a much more natural way to look and feel.”

After Maroon 5’s first album went triple platinum, Levine basked in the glory of fame. It was something he’d been working towards for the past 25 years. He moved into the Chateau Marmont and was linked to several high profile actresses and fellow singers in Hollywood like Lindsay Lohan, Jessica Simpson, Paris Hilton, and many more. “All of a sudden, I had money in my bank account. I hadn’t had a break in a long time. And I went a little f–king nuts. You know? And good. I deserved to go a little bit nuts. And I had the time of my life…There was a time in my life when I lived probably a bit more on the primal level. And it was amazing,” said Levine. He’s also a well known modelizer. He dated three Victoria Secret models in five years, the third being his now wife, Behati Prinsloo. The two share two daughters together named Dusty Rose Levine and Gio Grace Levine.

In a 2012 interview with Q magazine, Levine openly talked about the fact that he experimented with hallucinogenic drugs as a teenager. He described magic mushrooms as being beneficial as they helped him get to know himself better. “I definitely, firmly believe that the experience I had on mushrooms made me understand certain things about myself that I probably wouldn’t have otherwise. What I took away from that experience was valuable and beneficial to me. It really forced me to look at myself. It’s so corny to say but it’s true; you just get in touch with the wonderment you have as a kid that you tend to lose,” he said.

It’s pretty clear that Adam Levine is unique — it’s one of the reasons he’s so interesting to fans. Arguably one of his most unique traits is that he’s ambidextrous! He is able to use both hands equally. He prefers to write with his left hand, but he prefers to use his right hand for most other things like playing the guitar. 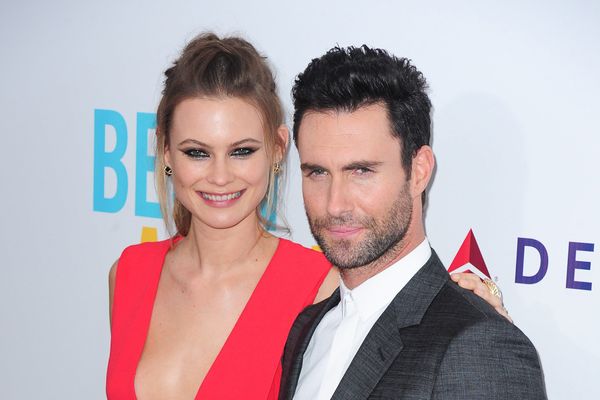