After their respective divorces, many were quick to throw country star Blake Shelton and superstar Gwen Stefani together because of their chemistry on The Voice, but others believed it couldn’t be true because they seemed like one of Hollywood’s most unlikely couples. Despite their obvious differences, they have made it clear that they are very much in love. Ever since their relationship was confirmed, their romance has been the headline of many tabloids with everything from starting a family together to secret weddings, but those are just rumors. Here are 10 interesting facts you probably didn’t know about Blake Shelton and Gwen Stefani’s relationship:

Despite being two of the biggest stars in the music industry, Blake Shelton and Gwen Stefani didn’t meet until they worked together on The Voice. Stefani joined the hit singing competition series for its seventh season in 2014, while she was still married to Gavin Rossdale and Shelton was still married to Miranda Lambert. Prior to Stefani joining the show however, she admits she didn’t know much about him. “I didn’t know Blake Shelton existed in the world! I had no idea,” she said in an interview with Seth Myers.

While she might not have known he existed before starting on the series, they sure know each other now, and although to many it seems their relationship came out of nowhere. Shelton explained how it really happened, and it was as sudden as it seemed. In July 2016, Shelton said their connection from work acquaintances to something more began when he opened up about his then impending divorce from Miranda Lambert. “I won’t forget that day. I looked over at Gwen — who I didn’t really know — and she had these huge tears in her eyes,” he told Billboard. “I thought it was going to be another one of those ‘things are going to be OK’ talks. Instead, she said, ‘I’m going through something very similar to what you’re going through. I understand. And I hate it.'” He added, “That’s kind of how our friendship and bond started, that day. It went from that, to checking in on each other once a week through email—’This s–t happened to me, what happened to you?’—to maybe three times a week, then every day, to ‘Hey, here’s my phone number if you ever want to text.’ Next thing I know, I wake up and she’s all I care about, and I’m wondering if she feels the same about me.”

As fans now know, only one month after Shelton’s sudden and shocking divorce from Lambert, Stefani announced the end of her own 13-year marriage to Gavin Rossdale. While individual divorces were extremely tough, their situations brought them closer together to the point Shelton has admitted that Stefani saved him. “When you have a broken heart — at least, when I do — you got to get it out of your system. You want people to sympathize with you. I was at rock bottom, in the middle of hell. Gwen saved my life. Who else on earth could understand going through a high-profile divorce from another musician?”

Before Gwen and Blake were a confirmed and very serious couple, many were led to believe that their whole relationship was a set up by NBC to improve ratings for The Voice. In the beginning many were quick to pickup on the heavy flirting between the then newly single coaches on The Voice, yet interestingly enough “sources” close to Shelton were quick to disregard the whole thing! “It’s total bulls–t. There’s nothing there. They’re nothing more than friends.” To make matters worse, in an interview with Ryan Seacrest around the same time in 2015, Seacrest asked Stefani about the rumors and whether they were “true or not true,” and she pinned the whole thing on publicity for the show by NBC! “I think NBC did that. Two divorced people, like, at the same time,” but she did add, “I think he’s hot.” Later, Stefani added that NBC was conjuring up a romance before it happened, “I love NBC, but they sure edited stuff to look like we were flirting. They chose to run with that story before anything was even real. I hardly knew him. But it was like it was in the air — happening before it happened.”

As the old cliche goes “opposites attract” and that couldn’t be more true when it comes to Gwen Stefani and Blake Shelton. Shelton is a straight country boy from Oklahoma who, when he isn’t working on The Voice, likes to hunt, fish and spend time on his ranch. Meanwhile, Stefani is an all-around city girl who loves the life of L.A. living, but they seemed to have fit really well into each other’s lifestyles. Early on, Stefani shared social media posts of visiting Shelton’s home in Oklahoma and it seems she and her kids visit there often. Meanwhile, Shelton’s best friend and fellow country star Luke Bryan gave Stefani his seal of approval. “I think Gwen enjoys learning a little bit more about us country people!” Bryan told People. “But she totally fits in and has a blast.”

Through two marriages Blake Shelton never had any kids and at 40-years-old it seemed that it was a decision he had made with his previous significant others. Now, however he has been thrust into the family man role with 47-year-old Stefani and her three sons aged 11, 9, and 3, but he seems to really be enjoying it. The pair have been spotted out and about with the kids many times and it looks like all three children have all really taken to Shelton. As such, rumors have already spread that the pair are trying for a baby of their own, but these cannot be confirmed.

Of the several family trips the pair have now taken with Stefani’s three sons, one of the most recent was a trip to Disneyland where Stefani learned some interesting information about Shelton, including an almost “deal breaker” in their relationship. “He’d never been to Disneyland! I was like, ‘Your life is not even complete yet. Like, what are you dong?’ I was nervous — because for me, obviously I go anywhere. Like, I know I’m going to get hounded for pictures or whatever, but I don’t mind. For him, he’s not used to that. Like I said, he’s in the woods most of the time,” she told Jimmy Fallon on The Tonight Show of their October 2016 visit to the Happiest Place on Earth. Unfortunately, when Fallon asked if Shelton went on Space Mountain, Stefani replied, “He won’t do the roller coasters!” Adding, “That was almost a deal breaker for me. He doesn’t fit in anything. We did go on Matterhorn. He did that one, but he barely fit inside the little thing, his knees were up like this!” Luckily despite Shelton’s 6 foot 5 frame limiting his enjoyment of rollercoasters, the duo’s relationship survived the adventure.

Although the two were very coy about their relationship status in the beginning, it really did not take long for the pair to form a song together and soon enough they were performing it, which sent the rumor mill into even higher gear. Shelton finally revealed that “Go Ahead and Break My Heart” wasn’t supposed to be the big duet that it became and he first only wrote it to impress the blonde songstress. “When we wrote the song, we never saw it going there, I don’t know that we ever really saw it going anywhere. I only started the song to impress her. To be like, ‘Hey, I’m writing a song about you,'” he told Ellen DeGeneres. “So I sent it to her, and then she wrote the other half of the song, I was like, ‘Oh, she just one-upped me.'” Shelton also added that despite the emotional context of the song, they couldn’t help laughing about it. “We kind of did laugh a few times. There’s moments where it’s like, Wow, we’re singing this song like we’re going to break up, and we’re not breaking up right now, so it seems kind of weird.”

For season 12 of The Voice, it is the first full season that the couple have been on, and already many have had enough of the constant reference to their romance. Many fans love them together, but the show is still about the music and the contestants, and while some fans are getting irritated, so are some of the other coaches. Rumors have indicated that “Gwen and Blake are really starting to annoy the rest of the judges and producers because they seem to feel like they are the stars of the show,” Celebrity Insider reported. Other tabloids have reported that Adam Levine in particular is annoyed by the show focusing on Shelton and Stefani’s PDA, and sometimes his reactions seem to prove that.

From the very beginning of their romance, Blake Shelton and Gwen Stefani have had to dodge rumors of engagements, weddings, and babies, but it seems the engagement and wedding might actually be happening. In the summer of 2016 it was widely reported that although no one had caught wind of an engagement, the famous pair had already hired a renowned wedding planner. By November of 2016 reports indicated the two were already “finalizing” their wedding plans, but still no word of an actual date! 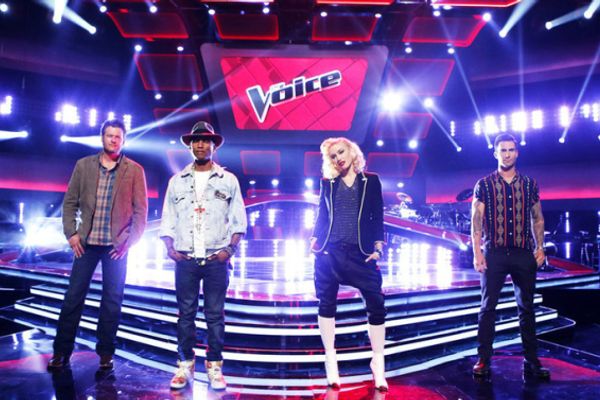