James Corden’s fame skyrocketed after he began hosting The Late Late Show in 2015. Prior to that, his success was primarily across the pond in London as the co-creator and writer of the critically acclaimed BBC sitcom Gavin & Stacey. He’s now gone on to host the Grammy Awards, Tony Awards and the widely popular Carpool Karaoke segment featured on his show. In addition to being one of the funniest late night hosts, he’s also a father of three and a husband. Check out these 12 things you probably didn’t know about his relationship with Julia Carey!

They were introduced in 2009 by actor Dominic Cooper who knows both Julia Carey and James Corden quite well. Dominic lived with Corden in London during the early 2000s and starred alongside him in The History Boys. Julia also knew Dominic for several years before he introduced her to Corden. Since he’s the reason the two are together, Dominic was named the godfather of their eldest son, Max!

Many people might not believe in love at first sight, but James Corden is not one of those people. The late night host told The Sunday Times Magazine that it was love at first sight, at least for him, when he met Julia Carey. “It was for me. I doubt it was for her. She’s incredible,” he said.

10. James Credits his Success to his Wife

When James Corden won his first and only (to date) Tony award back in 2012, he credited his success to his wife, Julia. “Seriously, I would not be holding this if it wasn’t for her. She made me say ‘us’ instead of ‘I’ and ‘we’ instead of ‘me’ and I love her. Thank you very much,” he said.

In an interview with Rolling Stones, James Corden opened up about how Hollywood has a skewed perception of falling in love when it comes to people who are “heavy.” He shared some details of his own experience with his now wife. “I met my wife; she barely owned a television and worked for Save the Children. We sat down one night and we fell in love and that was it.”

There’s no denying that James Corden’s career took a turn for the better after he’d met Julia Carey. Prior to meeting her, his life was somewhat turbulent. He documented all of his personal and professional hardships which included partying and an inflated ego in his 2011 memoir, May I Have Your Attention, Please? In an interview on Desert Island Discs, Corden said, “I was only ever going out to find someone to stay in with. She is the best thing that has ever happened to me. She has given me an anchor in my life.”

Julia and James got engaged on Christmas Day in 2010, a few months before their son Max was born. They tied the knot on September 15, 2012, at Babington House in Somerset with 200 guests made up of their closest friends and family. Similar to many other celebrity weddings, it was a star-studded affair. Celebrity guests included Michael McIntyre, David Walliams, Lara Stone, Matt Smith, Dominic Cooper and Natalie Imbruglia.

James Corden and Julia Carey recently welcomed their third child, a daughter, in December 2017. We’re not sure the exact date, but we’re pretty sure it was on December 12, 2017, because on that date Harry Styles took over The Late Late Show in James Corden’s absence. Corden later tweeted, “Today we welcomed a beautiful baby daughter into the world. Both she and her mother are doing great. We can’t stop smiling. Thank you Harry for stepping in to host the show at 2 and a half hours notice! x x x.” Now that’s a good friend!

5. Tried to Name is Daughter Beyonce

After welcoming their third daughter a few weeks before her actual due date, Corden revealed what he did afterward that upset his wife! “After the baby was born — anyone who’s been in this situation will know — we were both crying, I was crying my eyes out, my wife’s crying her eyes out, the baby is crying, and the doctor asked about her name…and I looked at the doctor and said, ‘We’re going to call her Beyonce,’” said Corden. “My wife did not think that was funny. Especially after the nurse went to the other side of the room and started filling out her form with the name Beyonce.'”

While walking the red carpet at the Primetime Emmy Awards in 2017, James Corden hinted to Mario Lopez that he and his wife might plan on having more children. “We said it was done after two, so who knows?” he said. The couple is already parents to a son named Max, born in March 2011, as well as two daughters, Carey, 3, and a newborn daughter who was born in December 2017.

Back in 2015 after they’d just welcomed their second child, a daughter named Carey, Corden told People he and his wife do a good job of sharing their late-night parenting duties. According to him, it all comes down to a hand of rock, paper, scissors! “[It’s] mostly whoever is nearest,” he joked. “Me and my wife do rock, paper, scissors for who gets up in the night. That happens all the time.” The cute couple now has their hands full with three children together, so we’re sure this is still accurate today!

Not only does Corden attribute his success to Julia, but he praises her for allowing him to uproot their entire family when he got his gig as the host of The Late Late Show. “People always talk about me and how much work the show must be, but it’s nothing compared to what she does. Our daughter was only 12 weeks old when we moved here. I had to come out earlier because the baby didn’t have a passport,” he said. “It was a massive thing to just pick up our life and come here, you know.”

While the move to L.A. was a big change, their home life has never been better! James emphasized how his current gig as a late night show host allows him to be home with his wife all the time. “We’re happy because we’re together all of the time. It’s not like I’m doing a movie where I’ll be back in a few months or play with eight shows a week where every night you’re on your own. Predominantly, this show is me being here, in this office, coming up with ideas and then we go and shoot stuff and do the show. Home every night,” he said. 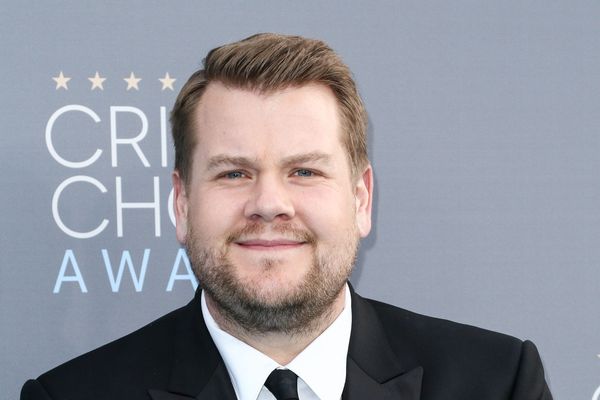