Things You Didn’t Know About Charmed

Charmed ran for eight glorious seasons from 1998-2006 and while it’s unfortunate we no longer get to watch the Charmed Ones in action, it seems to be one of those shows that is better the second time around. Rewatching the series makes us appreciate it even more than we did when it was airing which also fuels further interest in the show about things that fans may have never known. Charmed was a great show and one of a kind for several reasons. It was based on witches, which was unheard of at the time and it was one of a very few shows lead by all females through the talents of Shannen Doherty (Prue Halliwell), Holly Marie Combs (Piper Halliwell), Alyssa Milano (Phoebe Halliwell) and Rose McGowan (Paige Matthews). If you loved the show as much as us, check out some things you probably didn’t know about Charmed.

10. Holly Marie Combs (Piper Halliwell) spent all eight seasons in an on-screen romance with Brian Krause’s character Leo Wyatt but she actually married David Donoho, a key-grip for the show, after the two met on set. They were married in 2004 and have three sons, with her second pregnancy being written into the show and changing the story. Combs filed for divorce in November 2011 citing irreconcilable differences.

9. Did you happen to catch the slew of famous faces who appeared on the show before they were quite so famous? Kaley Cuoco Sweeting, Eric Dane, Jon Hamm, Norman Reedus, Zachary Quinto, Billy Zane, Charisma Carpenter and Amy Adams all made an appearance on the show at some point.

8. Holly Marie Combs is the only cast member to appear in every single episode of the show, including the unaired pilot episode. She was also the oldest sister on the show after Shannen Doherty’s exit but in real life Combs was the youngest of them all.

7. The show suffered a few financial woes. Each episode cost about $2 million to produce but that wasn’t enough for some of the stunts and special effects. Phoebe (Alyssa Milano) gains the ability to levitate but that was written out in favor of her gaining the power of empathy because it was too costly to create. Additionally Brian Krause (Leo) was temporarily written off of the show because of budget cuts.

6. Alyssa Milano was not originally Phoebe Halliwell although she quickly became the most recognized of the actresses over the course of the show. Lori Rom started out as Phoebe in the pilot but backed away from the show leading to the casting of Milano who then had to re-shoot all of Rom’s scenes.

5. Following the exit of Shannen Doherty’s critical character, Prue, Producers had to introduce a new sister to re-establish the power of three. Jennifer Love Hewitt, Sarah Brown, Tiffani Thiessen, Soleil Moon Frye, Susan Ward and Eliza Dushku all auditioned for the part before it went to Rose McGowan.

4. The Book of Shadows is actually almost entirely hand painted and Alyssa Milano liked the pictures so much that she commissioned the same artist to paint murals on her own walls at home.

3. In the Pilot episode Prue (Doherty) picks up a newspaper from the sidewalk with the headline, “Firemen Doubt Fire was Accidental.” The same newspaper is a prop in the 1993 Robin Williams film Mrs. Doubtfire and acts as the inspiration for his undercover name as Mrs. Doubtfire however in the film it is changed to a “Chronicle” newspaper and “Firemen” is changed to “Police.”

2. Even though the show ended its on-screen run in 2006 after season 8, the storyline has continued on in comic book form. Zenoscope Entertainment published Charmed: Season 9 on June 16, 2010 and continued on eighteen months after the televised series’ final episode. Charmed: Season 10 was published on October, 8 2014.

1. Show creator Constance M. Burge left the show after season two because she didn’t want Phoebe to have a longterm love interest enter the show. Executive Producer Brad Kern pushed the idea for the character who would turn out to be Cole but Burge thought Piper and Leo’s love story was complicated enough and wanted to focus more on the sister relationship of the show. When she realized it was not going to go the ways she wanted, Burge left and full production decisions went to Kern. 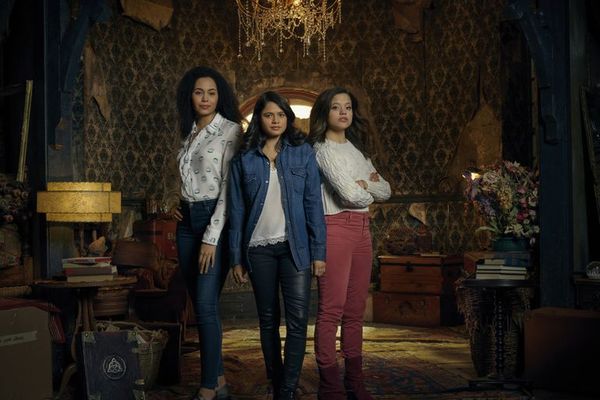