They are two of Hollywood’s biggest stars and they just happen to also have one of the most adorable platonic relationships in the industry. George Clooney and Julia Roberts became friends after working together on the set of Ocean’s Eleven and have since starred alongside each other in films like Money Monster, Confessions of a Dangerous Mind and Oceans Twelve. These two are never shy when it comes to gushing about each other, so here’s a look at 10 things you probably didn’t know about George Clooney and Julia Roberts’ friendship!

A lot of people assume these two knew each other long before Ocean’s Eleven. They were reported to be best friends for years prior to when they actually met which wasn’t until 2000, during the production of Ocean’s Eleven. “We met on Ocean’s. We had actually never met before. People just thought we had,” said Clooney to People. Roberts then chimed in and said, “He and [director Steven Soderbergh] called me to a little meeting, I think to see if they liked me.” This meeting took place at the Chateau Marmont and was the beginning of a lifelong friendship that now spans over 15 years and several box office hits. In a separate interview with the two of them, George said he and Soderbergh had heard she was making “20 a picture” so they sent her the script with a $20 bill, and she accepted!

It can be hard to find true friendship in Hollywood. There are definitely a lot of friendships that are more for publicity or career advancement, but this is not the case with Clooney and Roberts. In an interview with People while in Cannes with Clooney, she commented on how their friendship is one of the rare real deals in Hollywood. “What a relief we’re not Hollywood friends,” she said. “I just said to him an hour ago, ‘Thank God we really do like each other, or we’d be in hell.'”

8. Took Care of Julia When she was Pregnant

When Julia starred in Ocean’s Eleven with Clooney, Matt Damon, and Brad Pitt it was constant pranks. One time Clooney put a bucket of water over Julia’s doorway so that when she’d open it, she’d get drenched. He didn’t get her though — it landed on a bellman instead! However it was a different story when she was pregnant during the filming of Ocean’s Twelve. “At George’s house, I remember walking down this path pregnant with Phinn and Hazel and turning the corner, and all the boys were sitting at the table having lunch. They were like, ‘Oh, come sit down.’ I wasn’t allowed to walk the stairs. It was such a sweet shift in our relationships because originally, it was all pranks and teasing each other. And here I am pregnant, so it’s like pulling out my chair and just making sure I have enough water and, ‘Are you feeling OK? You look a little peaked.’ ‘I’m fine,'” she said to Allure.

At the Disneyland premiere of his film Tomorrowland, Clooney gushed about his bestie to People. “We’ve been really good friends for a really long time and I just adore her.” Then again in 2013, these two had nothing but nice things to say about one another while at the BAFTA Britannia Awards where Roberts presented Clooney with the Stanley Kubrick Award for Excellence in Film. When he accepted his award, Clooney said to Roberts, “It has been such a pleasure to watch the woman you have become. It’s very hard for me to be just straight nice because she’ll get me later. But [she is] just an amazing mother, an amazing wife and a great, great friend. It’s really an honor to have her here.”

While presenting George an award at the BAFTA Awards, Roberts revealed her kids call Clooney, “George Looney.” In a separate interview with Clooney, he talked about how his good friend has stayed at his home numerous times, and how great of a relationship he has with her kids. “She stayed at my house in Italy when she was first pregnant. She brought all those monsters [twins Hazel and Phinnaeus] back to the house when they were actual human beings and we’ve had a blast with them,” said Clooney.

5. They Both Fan Girled Over Jodie Foster

After filming their most recent movie together, Money Monster, Roberts told Extra that she and Clooney both freaked out when they found out they’d be working with Jodie Foster. “It was amazing. Jodie Foster was our director…George and I were pinching each other just thinking ‘How did we end up with this brainiac girl?’ It was awesome.”

We love hearing a good prank story, and Julia Roberts no doubt has a few after working on the set of Ocean’s Eleven (and Twelve) with best friend George Clooney, as well as Matt Damon and Brad Pitt. During an interview with EW Editorial Director Jess Cagle, Roberts said because she was pregnant during the filming of the sequel, the film’s cast treated her like she was “made of porcelain,” until they got to Rome. “When I got to the hotel in Rome, I opened my suitcase and there was this giant, heavy bronze statue in my suitcase — I almost burst into tears, [like] ‘How could they do this to me?’ Because this was a gag, to put something very heavy in someone’s suitcase,” she said. She ended up retaliating before finding out she was caught in the middle of a prank war with Clooney and Pitt. When asked what her retaliation was, the actress replied, “I think it involved some itching powder and Neosporin.”

As friends, it’s not surprising to learn that Julia Roberts and George Clooney both offer each other advice, especially when it comes to parenting. Now that Clooney is a father, they’re both parents to twins! Roberts is a mother to 12-year-old twins Hazel and Phinnaeus (as well as a 9-year-old son, Henry), while Clooney just welcomed his twins, Alexander and Ella back in June 2017. While on The Ellen DeGeneres Show, Roberts revealed she did, in fact, offer her old pal some advice, but didn’t go into detail of what she specifically said. She did admit that Amal and George will be wonderful parents. “It’s gonna be so fun. They are a great couple and I think they don’t need advice from me or anybody else.”

2. They Get Along with Each Other’s Significant Others

Roberts wasn’t able to make it to George and Amal’s wedding, but they’ve since done a few double dates with her own husband, Danny Moder. Roberts first met Amal over dinner, “It was so much fun to have her meet my wife and have both of them be such good friends and hit it off so well,” said Clooney. She’s since been to their house a number of times which is when Roberts said she sees the influence Amal has over George. In opposite, George talked about Julia’s significant other, Danny Moder. “Danny [Moder] and I are great friends and love each other. What’s really fun is it’s really like a family,” said Clooney. “It makes it easy.” Roberts chimed in to elaborate, “What he’s saying is we’ve just stitched our lives closer together. All these people that come into our lives; my husband, my children, his wife [Amal Clooney]. We just keep stitching our lives closer together,” said Roberts.

Ten years ago Julia Roberts predicted George Clooney would one day be a father. It was during an Oscar special on the Oprah Winfrey show when Roberts traveled to Clooney’s home in the Hollywood Hills, with cameras in tow so they could interview each other. During this interview, Roberts declared that she knew her best friend would one day be a father. She said, “George, one day you’re going to have a baby. You are!” We are not sure how much Roberts actually believed these words when she said them, but she can definitely say ‘I told you so’ now! 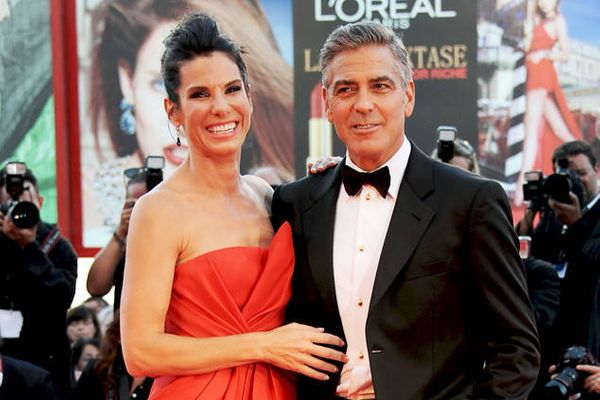